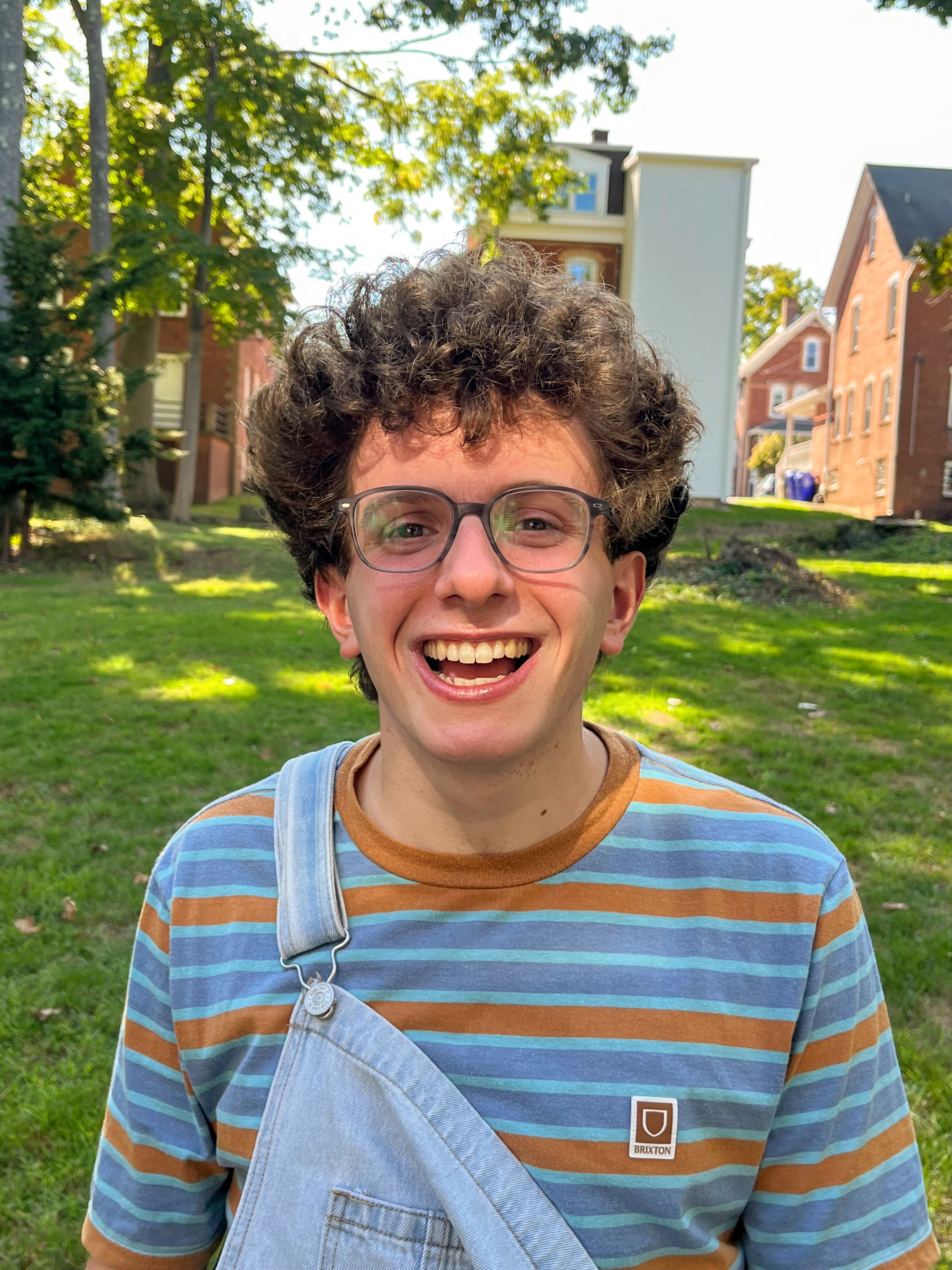 Sam Feuer ’23.5 loves to help people. From working as an orientation leader to lending a hand at the math workshop, Feuer always puts a smile on the faces around them. Feuer sat down with The Argus to talk about their experiences with the Wesleyan Media Project, their involvement in a cappella on campus, and how to navigate the twists and turns of college life.

Sam Feuer: I think I was nominated because I do a lot of things to help people. I imagine that a lot of the underclassmen know me as either someone who works in the math workshop or [as] their orientation leader.

A: What drew you to your majors, mathematics and computer science?

SF: I really have always connected with numbers ever since I was a little kid. I wrote my college essay about it, about how I just love numbers. And I see a lot of connections between numbers and music, which is the other thing that I’ve been passionate about my whole life.

Then I got here and my first semester…I really wanted to take different types of classes. That’s why I applied [to Wesleyan]. I really enjoyed both my math class and my computer science class. And I said I don’t want to give either of these up. So that’s why I chose to double major.

I could still do music classes and I promised my high school English teacher that I would take an English class when I went to college. So I did do that…. “Old Poetics for New Poets” with [Associate Professor of English] Courtney Weiss Smith. She’s great. I recommend.

[Being a math/comp sci double major] makes me feel a little [out of] place here, because it feels like everyone here is drawn to words or language or theory, and I’ve never really been able to get into that stuff. But, you know, I found my place in my community.

A: Can you talk about your involvement in the Quantitative Analysis Center (QAC) and experiences working in the Wesleyan Media Project Delta lab?

SF: I was very close to a professor here starting my freshman fall, [Assistant Professor of Computer Science] Saray Shai in the computer science department. I knew she was involved in this lab with the QAC called the Wesleyan Media Project Delta lab. So I asked her if I could get involved and I’ve been involved ever since. So that’s what, two and a half years? That’s crazy.

I’ve gotten really close to some of the professors involved. It’s been a really good experience. And just doing research is really fun. I needed zero background. I came in being super intimidated by the other people in the lab. They seemed like they knew what they were doing and I was just this freshman. But, after a while, you find your place. I help other people get into the lab now, too. It’s a fun time.

A: Are there any classes or professors that really shaped your Wesleyan experience?

Professor Shai. I’ve always been her biggest fan. She’s been very supportive of me even when I felt like I didn’t belong in the lab or a class, and helped me find opportunities. She’s amazing.

[Associate Professor of Mathematics David] Constantine. I took a class during the first on-campus COVID semester with him, so Fall 2020. I was struggling with some medical stuff, and he was extremely understanding and accommodating, [and] I learned so much in that class, even though I was consistently distracted. I loved it.

[Professor of Government Erika] Fowler has also helped me find my way a little bit because she’s the Director of the Wesleyan Media Project.

There have been a lot more. I feel like professors here are generally very supportive and I’ve learned a lot throughout my few years, just through talking to them and taking risks with certain classes that I’ve taken.

A: What’s the riskiest class that you’ve taken?

SF: I took “Old Poetics with New Poets” with Professor Weiss Smith in the English department. I am a slow reader. I cannot focus and I’m an unpracticed writer. And for that class, we had to write essays and we also had to write creatively. I’m a creative person. I love music, but I’m not a poet. And she made me feel so welcome. She’s so warm. She reminded [me of] my high school English teachers in that way.

I was really nervous when the class started. I was like, there’s no way I’m gonna be able to keep up with this. But for the most part, she was like, ‘You can do this.’ Like, even though there are people in this class who write poetry [or are] writing a poetry thesis or this or that. So anyways, it was really fun, [I] highly recommend.

A: You’re in two a cappella groups: Slender James and the Mazel Tones. Can you talk a little bit about your experiences doing a cappella at Wesleyan?

SF: I’ve been in one group since my freshman fall. That is Slender James. It’s definitely not the most serious group of people, but we sure do have a lot of fun. I was not exactly sure I would feel welcome in the group at the beginning of my freshman year, just because I felt a little bit different than some of the people who were there, even though I did like them a lot. But we really got along, and now I arrange a lot of the music for the group and teach a lot of the music that the group does.

The other group I’m in is also really chill, which is something that I love about a cappella at Wesleyan. And I just joined last semester because I was bored and wanted to sing more. The Mazel Tones, obviously, are Wesleyan’s Jewish a cappella group. Jewish music was a big part of my childhood. I love it. There’s just something about the melodies and the Mazel Tones have also been just such a supportive group of people. I love how I can show up to these spaces and it’s relaxing for a little while. It makes me forget about my classes.

A: You’ve worked as an Orientation Leader for three years now. Can you talk a little bit about your experiences as an OL?

SF: I wanted to start doing it because I like helping people. That’s why I work in the math workshop. That’s why I do a lot of things that I do. I loved my first year at Wesleyan, at least until the coronavirus hit, and so getting back onto campus really quickly seemed like a great idea.

It’s very rewarding to welcome new people. And I loved running the little events this year. I went to my first Common Moment…because I didn’t realize it was required my freshman year.

SF: To be honest, it looked like they were having a ball.

A: As an OL, what is your favorite icebreaker question?

SF: Oh, oh, that’s hard. I’m not good at icebreakers. I will say this is not something I use during orientation, but my friend Akaash [Kapoor ’24] recommended that we do ‘What would you “Yesterday?”’ Like the movie. Like, if you could have everyone forget about something and you don’t forget about it and you can do whatever you want with it. I think that was a very interesting question.

A: And what’s your answer?

SF: If I’m being honest, I would just like to cause a little chaos and see, if you remove someone who’s really fundamental, what would happen. I’d be curious about someone like Beethoven. Or a jazz person, like John Coltrane or something like that would be really interesting.

A: Is there any advice that you have for students coming behind you, especially the incoming first-years and prospective students?

The other piece of advice [is] advocating for yourself and always doing what’s best for you. The school can make it very difficult at times to get the things you need on a mental, physical, [and] medical level. Just keep pushing and never be afraid to do what’s best for you. I was terrified of taking medical leave for a semester at Wesleyan. It absolutely was the best decision that I’ve ever made.

The idea that you’re gonna have four years here and that they’re gonna go as you planned is hilarious and ridiculous. Like maybe my first few months went how I thought they were gonna go. The rest, maybe the opposite.

A: Do you know your plans beyond Wesleyan?

SF: I think eventually I’d like to go to grad school and I’d love to teach. That’s what I love doing at the math workshop. And that’s, I think, what I want to do right now, but who knows? I’d love to teach at a college level…. Go get my Ph.D. in something…applied math or applied computer science and teach. But that’s super duper subject to change.