If you missed middle school girl drama, tutus, or neon pink everything, then “Horse Girls” fulfills all your nostalgic dreams. And even if you missed none of these things, the one-act 45-minute show written by Jenny Rachel Weiner still evoked laughter, horror, cringe, delight, and everything in between. More than anything, it brought the audience back to 2013, a time of life many of us would rather forget, and yet did so in a masterful way that captured the angst of being a tweenage girl when it feels like the world itself is conspiring against you.

Directed by Hadassa Garfein ’24 and Vincent Langan ’24 and performed in the Westco Café on Friday, April 29 and Sunday, May 1, “Horse Girls” brought to life the story of the Lady Jean Ladies, a group of seven 12-year-old girls in Florida living in an alternate near-reality in which Mitt Romney is president. Led by queen bee Ashleigh (Sadie Goldstein ’24), these girls worship horses and First Lady Ann Romney with what can only be described as religious zeal. 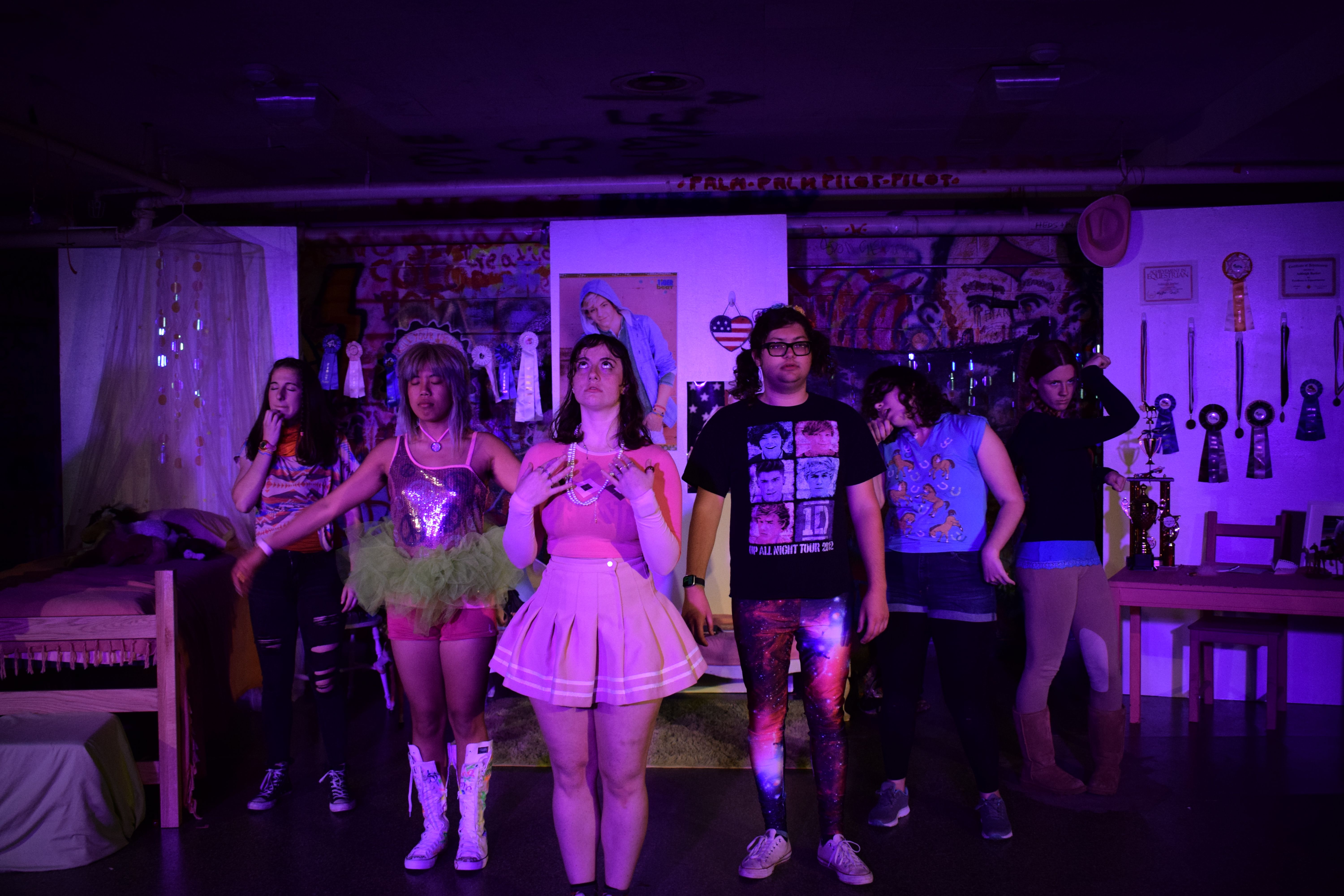 The show lives up to its tagline “BoYz may come and Go, bUt hOrSes aRe 4ever” when the Ladies, played by Goldstein, Georgia Garrison ’22, Elim Lee ’22, Sarah Linsly ’24, Caroline Lamoureux ’24, Miguel Tejada ’24, and Theo Dolan ’24, discover that their beloved stables are slated to be sold and their horses will be turned to meat. They spend some time arguing over what to do but ultimately decide that they must call their idol, Ann Romney, and plead with her to save their horses.

Complete with an original ode to Romney written by Garfein and Langan and a cameo-voice over from none other than President Michael S. Roth ’78, who answers the White House phone and refuses to let the girls talk to Romney, the show kept the audience enraptured in the drama of these girls and the lengths they go to for the horses they love.

“Horse Girls” is the “Saddle Club” meets “Riverdale,” riddled with comedy and threaded with dark undercurrents. In a gripping climax (and in typical middle school girl fashion) Ashleigh, caught in a violent fit of rage for love of her horses, kills two of her friends with one of her equestrian trophies when they refuse to run away with her and save their steeds. And then, of course, there’s the grand finale when the slain horse girls rise from the dead as their killer serenades the audience with Miley Cyrus’s hit song “The Climb.”

The show features everything you could want and everything you didn’t know you wanted until it happens on stage. There are secrets and blood, both of which are spilled before the show’s conclusion, complex friend dynamics and relationship woes, and deep insecurity and competition, coupled with an inexplicable dedication to horse riding and Republicanism.

Garfein and Langan, who have been friends since last year, have talked about putting on “Horse Girls” since Garfein discovered the play online in the fall and fell in love with what she called the fun and campiness of it. This semester, despite changing COVID-19 guidelines and difficulties booking performance spaces, they finally made it a reality with the help of Spike Tape, a new student-led theater group, who produced the show.

Garfein elaborated on why the play spoke to her in the first place.

“I’m really drawn to plays that are all-female casts written by women about young girls,” Garfein said. “And then I saw this play. I was like, ‘Oh my God, that seems absolutely hilarious, kind of like an elevated version of the plays that I love, because it’s so insane.’”

Through the production, Garfein and Langan aimed to recreate the experience of being a preteen and navigating the world at that age.

“Something that I really love about this play is that it explores the stage between childhood, or more specifically girlhood, and whatever comes after that, which is often a very uncharted territory, or is charted, but in a way that feels fake and forced,” Garfein said. “What’s really beautiful about this play is that all of our actors were the same age as these girls in 2013. So it’s just them tapping back into who they were in some regard.”

The two directors have enjoyed getting inside the minds of the characters as they’ve worked towards putting the show on.

“This play does a really good job of getting into tween girl[s’] heads and seeing the range of emotion that I think even children can conjure up in their heads,” Langan said. “In this play people get killed. People celebrate. People jump into song. People read poetry. People dance in a circle, hug their best friends. People cry, people scream at each other. People curse their best friends out. There’s such a range of insanity that we’re able to capture in 45 minutes.”

Langan emphasized that although the show has the potential to bring up negative feelings about early adolescence, it employs humor to say something profound about the internet age, changing relationships, and the process of finding oneself.

“These girls are always blindly looking for some idol to worship, whether it is a literal horse, whether it is Ann Romney, or whether it is some girl that they can latch on to, for popularity and for money and all those things,” Langan said. “[At the end] the girls are starting to realize they can be their own person and they don’t have to be doormats for this queen bee. I really think it’s a play about finding your voice at a time when you really don’t know what your voice is.”

Garfein and Langan also spoke about how effortless their collaboration as co-directors has been.

“We work together really, really well,” Garfein said. “And obviously we have our little moments, but they always turn into jokes…. Honestly, our vision is very consistent with each other.”

While middle school itself doesn’t usually end with a murderous twist, it certainly is a rollercoaster of ups and downs, emotional highs and lows, moments of laughter, frustration, love, hatred, and everything in between, all of which can bring you to tears and simultaneously reaffirm your faith in the world—or, in this case, in horses.

“I think the reason we’ve been able to tap into this place so much is because we were literally that age when this show takes place,” Garfein said. “And I think that that has just been such an amazing gateway for us to really bring our own take to the show and bring it to life. Bring it out of the page onto the stage and make it our own.”