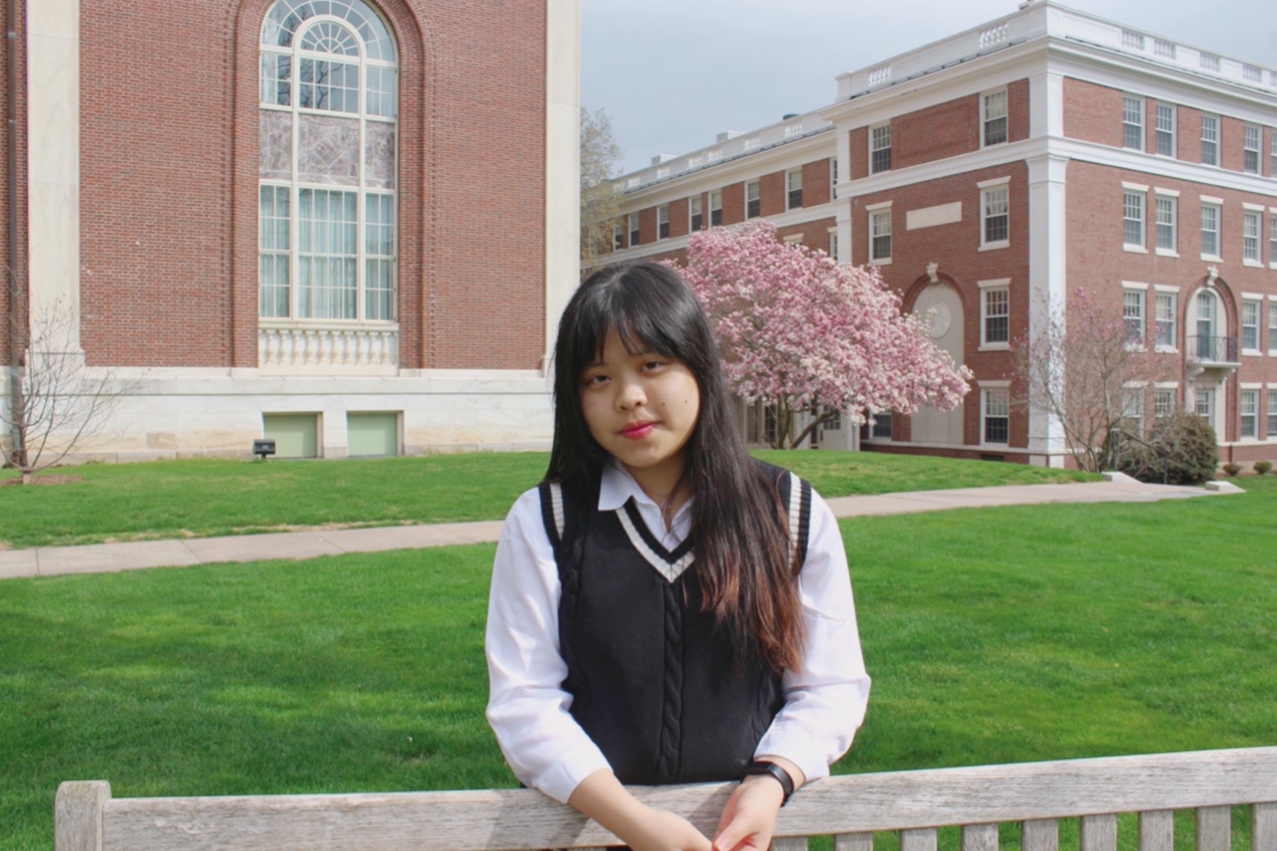 Saying that Anna Nguyen ’22 is tapped into campus culture is an understatement. Given that she has written her thesis on the history of the University, served as President of the Wesleyan Student Assembly (WSA) for the 2021-22 academic year, worked in Olin Memorial Library for four years, received awarded both a Freeman and a Schwarzman scholarship, and, unsurprisingly, listened to “Hamilton,” it is clear that the University has had great impact on Nguyen, and vice versa. As her last semester draws to a close, Nguyen took a break from writing her concluding speech to the WSA to chat with The Argus about her time at the University and where she hopes to go as a graduate.

Anna Nguyen: I don’t know. I know a lot of people on campus, and I keep forgetting I’m the WSA president.

A: You mentioned your work on the WSA. Can you explain a little bit more about that?

AN: I joined the WSA my sophomore year and was appointed a member of the Community Committee. I was just going to stay there for one semester, and then COVID happened, so I was like, “Oh God, I have to do a lot of shit.” I was really busy doing a lot of work in terms of student advocacy during that spring semester of COVID, and then I decided to stay on. The following year,  my junior year, I was elected to be the Student Life Committee Chair, which was anything to do with COVID and student life.

After that, I realized that I wanted to do more general culture things within the WSA in terms of leadership and management, so I ran for WSA president. It was a pretty historic ticket. I was running with Arianna Baez [’22], and I don’t think we ever had an international student or a female [first-generation], low-income international student become WSA president before, so I knew what I was trying to do in terms of showing that that is possible.

A: How has the WSA changed since you joined, especially regarding COVID-19?

AN: I think the student body is starting to realize that the WSA plays a bigger role in a lot of things than we all thought. That first spring semester, when COVID happened, we distributed so much money from our budget, and people realized, “Oh, the WSA has a lot of money.” We charge you $300 every year, and we have a $1 million budget every year to manage.

We also talked a lot with the administrators. Every week, I met with the VPs, and every month I meet with President Roth [’78], with other people who are in the leadership of the WSA. The Board of Trustees is another thing that we do with. [We make] sure that they know what’s going on and not just the rosy things that the administration is presenting every November, February, and May.

A: What is one thing, or a series of things, that you are most proud of with respect to your time in the WSA?

AN: I think of two things. One is that I’m very diplomatic, so when I work with the administrators, I do get very frustrated sometimes, and being able to learn to make sure that you show how committed you are to your role and how passionate you are about issues that students are facing, while also maintaining a good relationship with them [is important]. Being able to learn how to represent the students while also pushing the administrators without burning bridges, that’s one thing that is really important to me.

The other thing that is equally important is mentoring people within the WSA. If I leave and the WSA is in bad hands next year, then that’s probably my fault that I failed to make sure that there are people who have enough institutional memory and skill to deal with different partners on campus.

A: Would you like to speak to the academics you have been involved in at Wesleyan?

My work on the WSA also inspired my thesis. I wrote my thesis on the history of Wesleyan. I was like, “I’m not happy with how this institution is running,” so I wanted to be able to criticize it and know what I’m talking about. I traced it all back to Victor Butterfield. He was a good guy, a very good president, but the things that happened after he retired as President shaped the way that we are right now.

A: How was that process of writing your thesis?

AN: It was an intellectual project, but it was a more personal quest, because I haven’t left Wesleyan for four years. I came to Wesleyan from Vietnam in 2018. I have not come back home. My parents have not seen me for four years. When you’ve stayed at a place for so long, it does become your home, even if you don’t want it to, and I think that there are people at Wesleyan who have had more faith in me than I ever did.

We students used to use chalk and then write on the sidewalks whatever we think. It has shock value. It’s very Wesleyan and quirky. In the Butterfield tunnels, which we don’t even have access to, once upon a time students had access and could paint murals. But Douglas Bennet came in and said, “We are too weird,” so he banned the chalking and he painted over the tunnels.

A: Have any classes or professors that really shaped your Wesleyan experience?

AN: Alice Hadler used to be the [Senior Associate] Director of the [Fries Center for Global Studies]. She was a Freeman advisor. She read through every single one of my CSS essays during sophomore year.

And then [Woodhouse/Sysco Professor of Economics, Emeritus] Richie Adelstein. He also advised my thesis. I just love the man. He’s like an advisor and a mentor, a friend, but also a grandfather.

[Library Assistant V/Circulation and CTW] Randy Wilson. I walked into Olin during the summer. I was like, “Can you give me a job in the library,” because if you want to work on campus, the library is the best job. He was so amazed by my British accent that he just gave me the job.

A: Is there anything else that you’re involved with on campus?

AN: I was a House Manager for ResLife. I was a [Residential Advisor] and then this year, I’m a head resident. I manage a staff of about 20 people who work in Program Houses on the east side of campus.

A: How do you manage your time?

AN: There are things that I love so much about Wesleyan and there are things that I wish Wesleyan could be better at. I see that sentiment around campus as well, but a lot of these people don’t do anything about it. It’s this bystander effect: you assume that someone would do something about it, but it will not be you. Instead of doing that, I push myself a bit further and say, “If I don’t do it, I don’t know who else will.” I, as an individual, can’t change it, but if I get involved and meet and mentor different people, that’s how you create that domino effect instead of the bystander effect.

That’s why I’m involved in so many different things on campus. That comes from a sense of loyalty to the institution. The fact that I almost didn’t go to college, but went to college because of the Freeman Scholarship at Wesleyan, Wesleyan chose to have faith in me, so I will choose [to have] faith in Wesleyan.

A: What advice would you give for the incoming, future, or prospective students?

AN: The first thing I tell them is this place is not perfect, it will never be, but that’s the beauty of it. You come in and you have that power to shape something and you can learn to do that with other people. I don’t feel like you have to have an idealized college experience—to go out and party, to have a very big group of friends. Do it your own way. Actually do the “liberal arts education” approach. Don’t give in to disciplines. Explore across the board. It [takes] interdisciplinary classes to see what you are really interested in. Make sure you find one or two faculty members who you can kind of be friends with. That relationship between faculty and students is just as important as having friends outside the classroom.

A: If you were to pick three songs that define you, what would they be?

AN: My head goes straight to “Hamilton.” “The Joke” by Brandi Carlile—I always come back to that song. “The Times They Are a-Changin.’” I feel like I should do an Adele song: “I Drink Wine” is a very good song for me. “Hold On” is a very close second for Adele. I think every college student should listen to it once in a while. [After the interview, Nguyen said that “Vienna” by Billy Joel belongs on her top 3 list, making the two Adele songs honorable mentions].

A: As this semester is coming to a close, what’s on the horizon for you?

AN: I’m going back home for two months. I haven’t mentioned that I have two younger brothers. One is 10, the other is 12. I’ve missed four years of their childhood, so I’m really excited to see them again.

I also look forward to being in China. My parents call me a “floating vegetable.” I have been to England, America, China, Vietnam, and going back to China this time. I love floating around, so as long as I can keep doing that, that’s what I’m going to look forward to in my life.