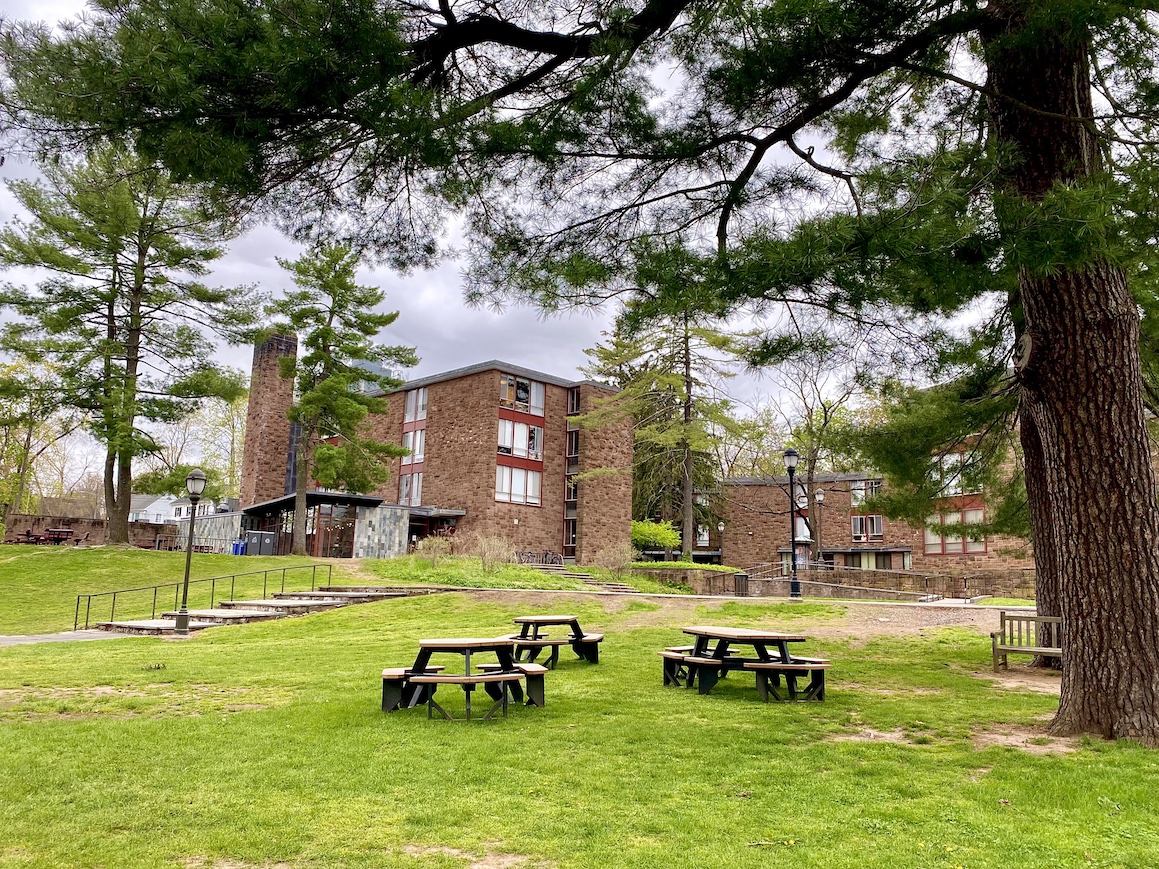 It was late March. Spring had, disappointingly for many, not yet sprung; midterms were nearly over, and school was back in session. As the student body returned from break and reentered the fray of life at Wesleyan, Area Coordinator (AC) Cesar Cruz Benitez sent a disconcerting email to residents of Nicolson and Hewitt.

The email, which arrived in the inboxes of nearly 400 students on Friday, March 25, informed the recipients that an individual (or multiple people) had been throwing away bags of urine in the trash rooms of Nicolson 6, Nicolson 7, and Hewitt 8.

“I ask that you refrain from disposing of urine in bags in the trash room,” Cruz Benitez wrote in an email to residents of Nicolson and Hewitt. “If you have a medical condition or other reasons for which you are not using the restrooms please reach out to me so that we can provide the proper support. Continued disposal of bags of urine in the trash room may result in judicial consequences.”

Off the bat, residents felt shocked by this notification, with a number of students on campus dubbing the perpetrator(s) “the Nics Pisser.” Amari Stuppard ’25, who lives in Nicolson 5.5, immediately felt appalled.

“[I felt] absolutely mortified by the mere thought that someone could be so inconsiderate,” Stuppard wrote in a message to The Argus. “I think this explains the amebous yet oddly specific culture that freshmen are so perturbed by when it comes to being put into the Nics.”

“The SMG custodial staff noticed it when they were going about their regular duties of emptying the trash room and they spotted it in the trash can as it was in a clear plastic Ziploc bag,” Cruz Benitez wrote in an email to The Argus.

Following this email, the frequency of urine disposal in trash rooms has decreased, although it has still continued to happen, according to Cruz Benitez. This posed a biohazardous problem for both those living in the residences and the custodial staff who have to empty the trash rooms.

“From my conversation with the SMG custodial staff regarding this issue I have come to understand that they cannot simply dispose of the bodily waste in the dumpster as they do with the other waste,” Cruz Benitez wrote. “Instead they are required to dispose of it in the bathrooms and flush. This is something that takes time away from other duties that they would otherwise be doing, which then the residents feel the impacts of.”

Cruz Benitez emphasized that this issue places an undue burden on the custodial staff, who often go underappreciated and unnoticed by their residential communities.

“The SMG custodial staff is not always able to easily know…that there has been urine disposed of in bottles or bags and they have had the bags tear on them and then get their clothing or body soiled with urine,” Cruz Benitez wrote. “Custodial staff already are an overlooked community of members on this campus and are not appreciated enough for the work they do and on top of that to have someone else’s urine soil your clothing it is quite demoralizing.”

A few weeks after Cruz Benitez’s email to Nicolson and Hewitt, residents of Butterfield C received a similar communication from AC Emily Pearson. Pearson’s email announced that an individual had been urinating in bottles and disposing of them in the residence hall’s trash room.

“Please be respectful of your fellow community members, including the custodians,” Pearson wrote in an email to residents of Butterfield C. “I’m disappointed and disgusted to hear this has been an issue and that anyone is having to waste their time dealing with this. You are adults, please act as such.”

The whole incident was both disturbing and comically surreal for Butterfield C resident Milly Hopkins ’25.

“It feels like something a bad comedian would have written,” Hopkins wrote in a message to The Argus. “Aerodynamically, it feels more complicated to piss in a bottle than a bathroom, given that there’s one in ever[y] hall.”

Hopkins hypothesized about who could have been responsible and called into question the idea that it was a lone-wolf perpetrator.

“Not to be crude but I would assume it’s guys doing the bottle-pissing,” Hopkins wrote. “And it’s clearly in large-ish quantities, so is it a friend group thing? Is it two roommates who have come to an agreement?”

For Hopkins, the worst part of the incident was the burden that it placed on Butterfield C custodians. Similarly, Pearson emphasized that the needs of both those living in the building and those working in it are at stake in this situation.

“I hope that students realize that bodily waste, like urine and feces and other things like vomit and blood, are biohazards,” Pearson wrote. “We have safety protocols for dealing with those things as they’re not healthy for our communities to deal with.”

Pearson’s email seems to have stopped the urine disposal in Butterfield C trash rooms, although earlier efforts by the SMG custodial staff were not as successful.

“One custodian put signs up in the trash room asking for students to not dispose of bodily waste in that manner, and the signs were torn down,” Pearson wrote. “The next day, the custodian reached out to the RAs they see the most to talk about it. My email went out later that day to the whole building.”

Though she has not dealt with an issue like this in her two years as Butterfields AC, Pearson has had incidents of residents being generally messy or inconsiderate in common spaces.

“We try to talk with residents about how this is an added burden to others, especially the custodians, and that it is a privilege to have someone cleaning up after them,” Pearson wrote in an email to The Argus. “I usually try to stress that they are all adults now, and that if they were to live in an apartment off campus they would not have someone cleaning up after them.”

Cruz Benitez, unfortunately, had to confront a similar urine disposal issue during the 2019–20 academic year.

“Between the SMG custodial staff member and myself we were able to identify who it was,” Cruz Benitez wrote. “I reached out to that student to schedule a meeting. We met and I had a conversation with the student in which I told the student I am not here to judge or shame but to understand why the students was disposing of water bottles of urine in the trash room and to have the student understand the impact that it was having.”

Though both Cruz Benitez and Pearson mentioned the possibility of pursuing judicial consequences in their emails, Pearson no longer intends to do so.

“We do not know who it is, and we’re just happy it’s stopped at this point,” Pearson wrote. “Hopefully a good learning moment for folks on cleanliness and respecting others.”

Cruz Benitez also emphasized the importance of listening to and understanding the individual needs of those disposing of urine improperly rather than simply punishing them.

“While it may be reasonable and justifiable to pursue judicial action for this given the impact that it has on the community as a whole and on the SMG custodial staff most directly, it is important to understand the root cause of why this is something that someone is doing,” Cruz Benitez wrote. “This is why my approach is to have a follow-up conversation to start.”

The perpetrator, Cruz Benitez imagines, could have a myriad of different reasons for their actions.

“The reasons could really range in what may lead someone to be doing this, whether that is someone who is an avid gamer and this is their approach when marathon gaming, to someone who may be experiencing a medical condition,” Cruz Benitez wrote. “In any case my hope is to support the individual and the community.”

Above all, Cruz Benitez emphasized the invaluable role that custodians play in making the University work. He reiterated that both the specific issue of improper urine disposal and general mismanagement of personal waste places a great deal more strain on these people than necessary, and asked the student body to be considerate and compassionate.

“In my experience as I speak with the SMG custodial staff regularly, they take great pride in their work and want to provide a high quality level of service,” Cruz Benitez wrote. “There are things that we can all do to do our part to not make the SMG custodial staff jobs more complicated or frustrating. There are humans behind the work of keeping our campus habitable and clean, they are a part of our community, say hi to them, have a conversation with them if you are able, thank them for the work they do.”