In early 2001, Scott Cavanaugh ’99 was living in Somerville, Massachusetts. On one February night, Cavanaugh was talking with some friends, all of whom were also recent Wesleyan graduates and were following March Madness. Cavanaugh had an idea that would affect the next two decades of their lives.

“What if we bet on a bracket for a sport we don’t know anything about?” Cavanaugh thought aloud.

The group agreed that it could be hilarious to fill out a bracket without knowing anything about the sport. At the very least, it would be interesting to see who would come the closest to predicting the outcome of each match. Thus began a long twenty-year tradition.

Cavanaugh and his friends decided they’d follow the NCAA Division 1 league for their bracket. It wasn’t as high-stakes as a national league, but still had a clear enough structure and media coverage for them to follow without putting in too much effort. Cavanaugh emailed the empty bracket to those who’d shown interest on that first night, along with a few others, and each person shared their completed bracket by email before the first playoff game.

When that year’s tournament ended, Alison MacAdam ’01 was declared the winner. Cavanaugh took the game to another level by buying a trophy—a jockstrap from a sporting goods store—and inscribing MacAdam’s name on it in Sharpie. It was dubbed “The MacAdam Cup” and Alison got to keep it until the next year when Cavanaugh would eventually send the bracket out again.

That next year, most of the original participants quickly filled it out, with some even sharing it with relatives and friends. Every year since 2001 (except in 2020 when the tournament was canceled due to COVID-19), Cavanaugh sent out the bracket. Each year the winner’s name is added to the cup, immortalizing their victory.

As “The MacAdam Cup” progressed, the victors have been the spouses, children, siblings, and friends of its founding members. Many of the participants hadn’t interacted outside of the emails they’d send each year filled with discourse surrounding the tournament.

Participants’ strategies have also become progressively creative. Emily Schreiner ’01 remembers making a joke one year to her then-boyfriend Nicholas Mader ’01 that a monkey could flip a coin and turn out a more accurate bracket than any of the members of the pool. So, he designed an algorithm that filled out the bracket based on 50/50 chance, aptly named it “The Coin-Flipping Monkey,” and sent in its completed bracket. That year, the monkey won, and it still participates to this day.

On the 20th anniversary of the cup, Greg Brodsky ’99 rallied MacAdam and other members of the pool to put together an audio tribute expressing their appreciation for Cavanaugh’s friendship and commitment to the tradition.

“Scott, you bring joy into all of our lives once a year, and you put a lot of work into it and for everything that you have done, and hopefully we’ll do for sixty, eighty, maybe a hundred more years, we thank you,” MacAdam said during the tribute.

However, the group did more.

As he looked forward to the 2022 competition, Cavanaugh realized the cup was missing. Ashley Grant ’00, Cavanaugh’s wife, won the cup in 2021, so the trophy should have been in their house, but it was nowhere. In the depths of panic, Cavanaugh turned suspicion to his children, asking if they had misplaced it.

Then, in early February, a suspicious package addressed to Cavanaugh was delivered to his home. The return address belonged to a “Douglas J. Cannon” of “45 Wyllys Avenue, Middletown, Connecticut.” Inside the package was a small gold trophy—the kind you’d get for coming third in a children’s soccer league or achieving honor roll at your elementary school—wrapped in a recent issue of The Argus with the inscription “MacAdam Cup 2022,” and a packing slip with a random address in North Carolina.

That’s when the emails started. The first email, sent from macadamcup@gmail.com (an address that Cavanaugh neither made nor recognized) contained only a short message, made to look like an old-fashioned ransom note with letters of different shapes, sizes and fonts.

“Dear Hockey pool, We kidnapped the Cup,” the note read. “It is being held in an undisclosed basement of a well-known hockey rink, guarded by members of the 2010 BC Eagles. We demand 30,000 bitcoin, or else the cup gets Zamboni’d! Love, the Unathletic Supporters.”

Without delay or any suspects in mind, Cavanaugh sent an email to the rest of the circle, encouraging the thief or thieves to reveal themselves and suffer minimal consequences for their treason. No one came forward, but accusations, as well as alibis, began to fly immediately.

Topping off the list of suspects was Cavanaugh himself. Some thought it might be his way of injecting excitement into this year’s competition. Cavanaugh has a reputation among those who know him for being mischievous.

For instance, when the University began marketing itself as “The Independent Ivy” in 1998, Cavanaugh was among many students at the time who did not appreciate the school’s new brand and wanted the marketing campaign brought to a swift end.

Along with friends, he launched a sticker protest: They posted bright orange stickers across campus that read in emboldened letters, “I DO NOT ATTEND THE INDEPENDENT IVY”.

To make matters worse, Chris Miller ’99 recounted in an email to the group that he assisted Cavanaugh in stealing a rug from the admissions office of North Carolina Wesleyan University, circa 1997. The case against Cavanaugh was gaining traction by the minute.

Emails continued to roll in from the mysterious address, with photos of the MacAdam Cup in various locations around the country attached to each. These locations included the Spurrier-Snyder Rink, the Golden Gate Bridge, and the courtyard of the FBI headquarters in Washington, D.C. Cavanaugh realized that the only way to clear his name was to find the thief. 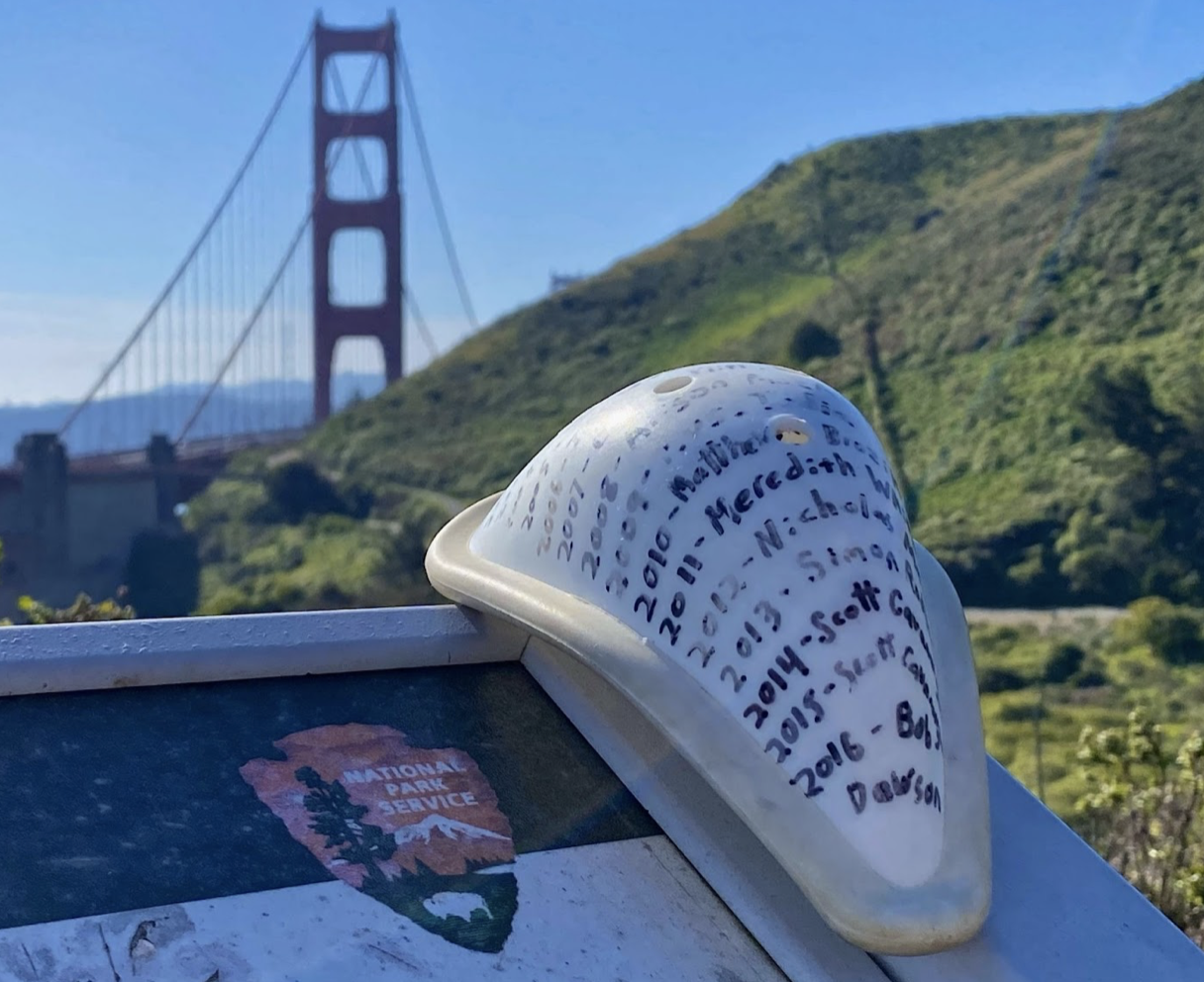 He researched the address from the original package’s packing slip. It turned out to be a red herring. On the suggestion of a fellow pool member, he spent 99 cents to get an identity report on the macadamcup@gmail.com address through a website, to no avail.

“[The website] definitely didn’t give me the name of who set up the gmail address,” Cavanaugh reported to the group. “But it did make me 99 cents poorer.”

He even tried setting up fake email addresses of his own, impersonating different members of the hockey pool. He then sent emails to other members, seeing if anyone involved in the theft of the cup would reveal themselves as a co-conspirator. No dice. He later found out that most of those emails went straight to spam.

Stumped again, he found himself searching the addresses of his friends and fellow hockey pool members to find pictures of the real estate listings of their homes. Upon inspecting pictures of the home of Scott Kushner ’01, Cavanaugh noticed something familiar. The backsplash in Kushner’s kitchen matched that in a picture of the cup that had been sent from the macadamcup@gmail.com account. Kushner was busted.

Initially, Kushner denied that he was any more than a pawn in the plan of the real criminal mastermind(s) that stole the cup. He admitted only to receiving the cup and instructions on how to pose and photograph it from an anonymous source.

As the year’s hockey season began, all was quiet, relative to the chaos shortly before. Mader won the Cup title, having guessed the outcome of every game in the tournament correctly except the championship itself. While theories about the cup’s theft still floated among the group, no other significant revelations were made until the night of the final match.

Brodsky and Kushner loaded their families into cars and headed up to the home of Cavanaugh to finally reveal the mystery of the missing cup. They had masterminded the entire operation. They unveiled their plot during a long-overdue dinner with good friends.

Kushner and Brodsky have been friends with Cavanaugh for most of their lives—they grew up together in New Hampshire before attending the University together. Although they are founding members, none of the three has ever won it. Regardless, both thoroughly enjoy the tradition. For them, stealing the Cup was a way to mess with an old friend while maintaining the spirit of what he created.

Upon the 20th anniversary of the tradition, its members have reflected on what it means to them and what could be next for the group of friends.

“What I’m most excited about is seeing a member of the next generation win the MacAdam Cup,” Ike Walker ‘99 shared in his contribution to the audio tribute. “I have enjoyed watching [as] the youth joined the hockey pool, but none of them has won yet, which is a shame. Their time has come.”

The MacAdam Cup traveled almost 7,000 miles before returning home and reuniting friends. Where will it go next?

Scott Kushner was an Editor-in-Chief for The Argus.

Sulan Bailey can be reached at sabailey@wesleyan.edu.