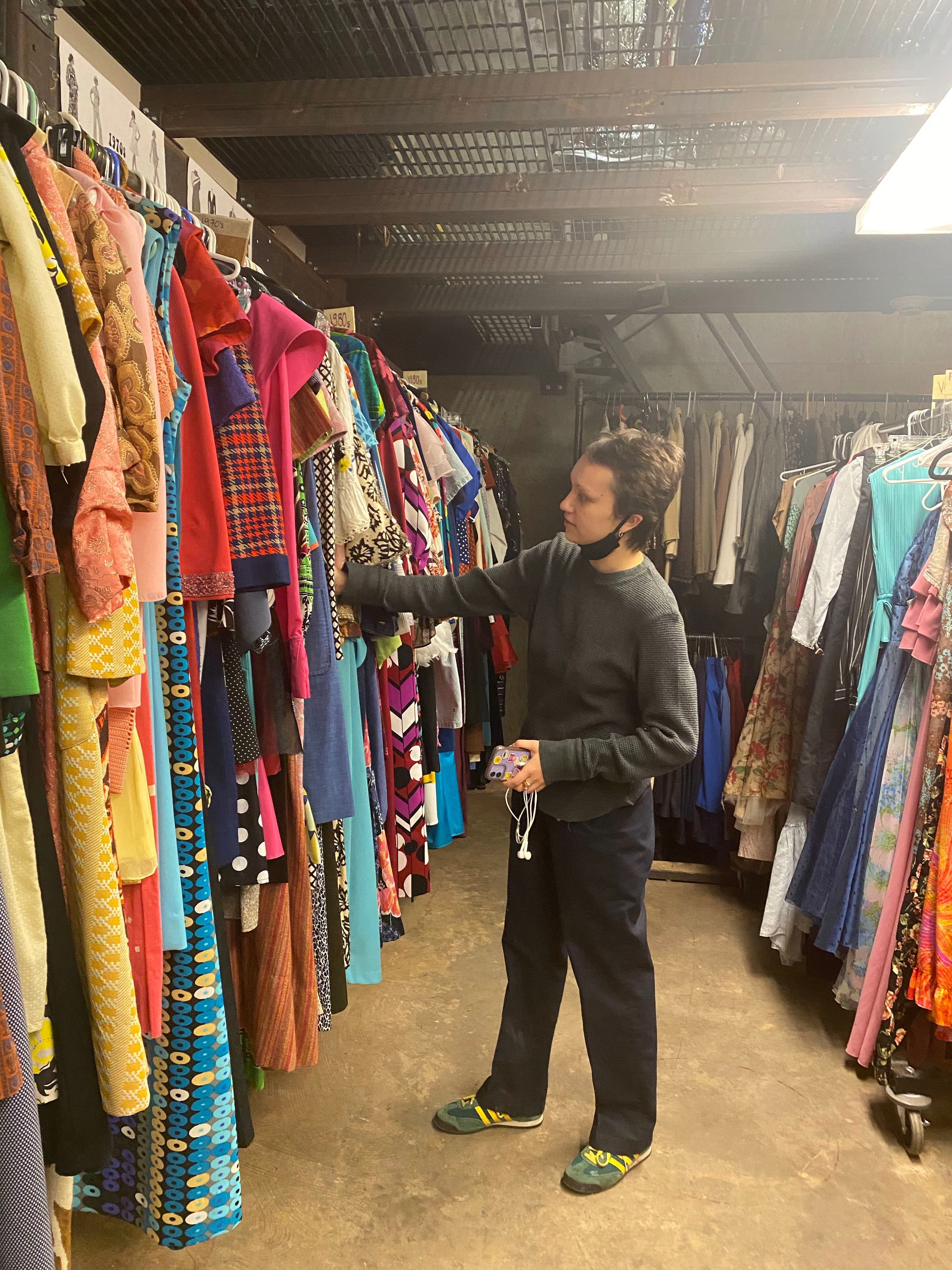 This is an installment of the Artgus Artist Spotlight, an ongoing series presented by the Arts & Culture section, intended to highlight the artistic talents of the wider Wesleyan community. In this installment, Contributing Writer Luisa C. Rodriguez-Oei ’22 spoke with Luna Dragon Mac-Williams ’22. Mac-Williams is a writer, poet, playwright, jewelry business owner, soon-to-be seamster, dancer, and drag king. Rodriguez-Oei and Mac-Williams met in the basement of the Theater Department to discuss Mac-Williams’s work and creative background.

A Pinocchio puppet dangles from a coat hook, staring blankly at me. The funny thing with the Theater Department is, as the costume shop manager Robin Mazzola puts it, “If you think you’re in the wrong place, you’re exactly where you’re supposed to be.”

I meander down the hallway and hear a voice calling my name. I turn around and see Mac-Williams’s overgrown buzz-cut head poking out from a giant metal door.

The rest is a blur. As I rush to greet them, Mac-Williams explains that the green room isn’t really a green room but a big closet where the costumes are archived. We embrace in the doorway, and, before either of us can step one foot into this so-called green room, the heavy metal door slams into their forehead.

“It’s fine, I’m used to pain,” they say, trying to usher me inside the green room.

It’s partially true. Anyone who has met Mac-Williams knows that they will throw themselves into their work, often quite literally. The faint regrowth of their eyebrows (which have been repeatedly glued down for drag king makeup) and bruised dancer’s knees from show-stopping floor slides are the markers of an artist dedicated to their craft. The swelling, red bruise on their forehead, however, tells me that the door run-in was not artistic panache. One run to the health center and an ice pack later, we are ready to begin.

Mac-Williams faces a long wall of period piece costumes, organizing dresses between the 1970s–80s. Very few people can radiate the energy they seem to possess while holding a giant ice pack to their head.

“I just know at this point, you live in it,” Mac-Williams said. “You breathe in it. You are writing. The art is in you. You don’t have to prove it to anybody…. If you just make it, and don’t put the pressure on it, you can make it and go back to it.”

Having grown up on the southwest side of Chicago in a town called Little Village (also known as La Villita because of its vibrant Mexican immigrant population), Mac-Williams comes from a family of educators. Their grandfather was, and still is, a teacher at their elementary school. Their parents met in the second grade in the same Chicago community, where Mac-Williams’s paternal grandmother taught the class.

Their family, community, and Mexican American identity deeply influence their artistry. For example, their most recent production as a playwright, “Corazones,” is realistic fiction, one-act memory play that follows the stories of six young women in Chicago (as told by themselves). One of the characters, Margarita, was inspired by Mac-Williams’s mother, who moved from California to Chicago alone at the age of 19.

When asked about other influences in their upbringing, Mac-Williams practically sings about their elementary and middle school choir teacher, Ms. Martinez. Each year, Ms. Martinez ran a fundraiser for eighth graders to see a professional theater production. When Mac-Williams was in seventh grade, they had one extra ticket to see “West Side Story.”

They recount their passion for dancing, acting, and singing, their body language shifting with the grace and awareness of a dancer.

“I saw a show where people did all of that together,” Mac-Williams said. “It was beautiful, it was timed gorgeously, and it seemed fun. The audience was connecting.”

With education playing an integral role in their upbringing, Mac-Williams learned to trust their creative impulses and intuition.

“Growing up in such a creative environment—but also a struggling environment—I’ve always known what felt beautiful and didn’t, or [what] felt right,” Mac-Williams said.

When I ask Mac-Williams if they think they’ve changed since when they were a kid, or, if they believe they’ve stayed the same, their firecracker energy seems to move inward. They describe their sophomore year at Wesleyan. At the time, Mac-Williams was taking three classes, acting in two student plays, performing on two dance teams, dealing with changes in mental health, and navigating life as a 19-year-old college student.

They pause and take a deep breath. Their hands become still, fingers tentatively laced together.

“I am exactly the same person, but also exactly different,” they said.

Although the phrase contradicts itself, it perfectly encapsulates where they’re at now.

“I’ve chilled out so much,” Mac-Williams said. “I feel like my energy is not so panicked and out at the front of my face.”

While Mac-Williams considers themselves to be many things as an artist, their energy emanates a purpose that transcends any of those roles.

“To know that people can…make an impact on others’ lives has made me think, ‘Oh word. That’s what I’ll do,’ because Ms. Martinez has done it,” Mac-Williams said.

At the start of the pandemic in 2020, Mac-Williams created a program within After School Matters (ASM). ASM is a paid internship program that gives students from predominantly low-income households in Chicago experience working with professionals across different fields. Mac-Williams’s program, “By Us, For Us: Theatermaking in Chicago’s Neighborhoods,” is based on their own transformative high school experience with ASM’s Musical Theater Experience internship. Mac-Williams uses various techniques from their own personal practices to teach their students.

“One of the things that I have always done my whole life is journal, and make my journal a place where I can’t be afraid to be messy and depressed,” Mac-Williams said.

With written prompts and journaling guides, they are already impacting the lives of their students.

“One of the most meaningful things a teen [from my program] has said is that it makes them like writing in a diary,” Mac-Williams said. “This was the third day, and they were like, ‘Yes, let’s journal.’ I was like, ‘Period, Carlos! You wanna journal? Yeah. You wanna free-write?!’”

Interestingly, in all of Mac-Williams’s artistic work, you won’t find a single villain—and why?

While some people may have a hard time understanding this concept, Mac-Williams’s self-awareness demonstrates a profound empathy for the world around them.

“The fact that I have always been able to tap into that other space where I just see the beauty of the way that everything is,” Mac-Williams said. “That has not changed.”

Mac-Williams is one of the most grounded people I know.

“I am who I am because I come from unquestionable care, from people reaching out with care at any opportunity, with beauty, and with a question, and not fear,” Mac-Williams said. “I know that that’s the energy that I have to put up back at the world.”

And this is exactly what Mac-Williams seems to be doing: putting their entire being out into the cosmos, and waiting with open arms for what comes back.

To nominate a student artist for a profile, go to tinyurl.com/3ttmszh4.