“Daddy Issues”: An Uproarious Celebration of Grief and Friendship 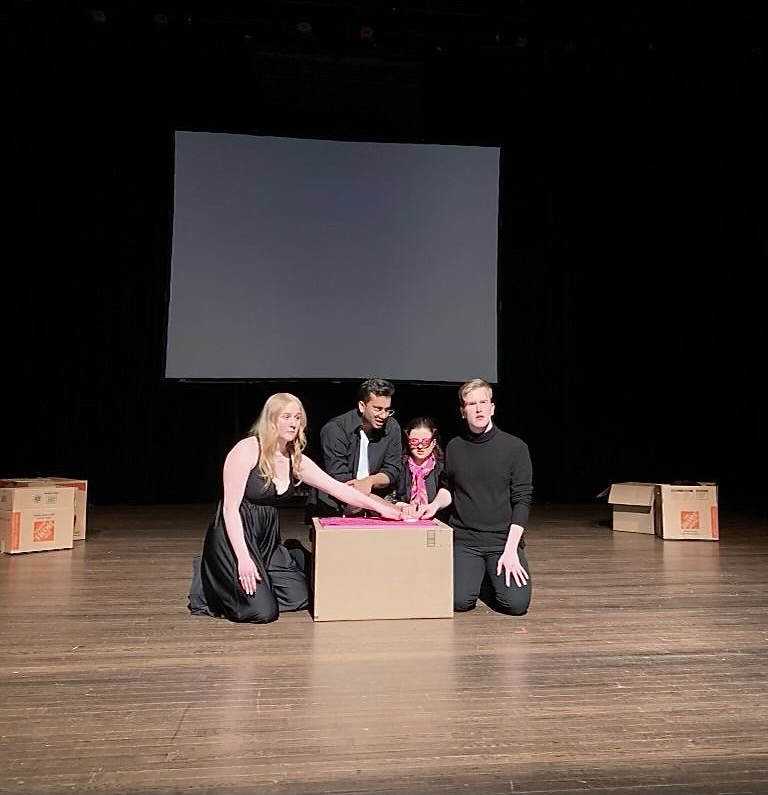 On Thursday, April 7 and Saturday, April 9, Keith Jones ’22 and Elizabeth Nefferdorf  ’22 performed their senior theater capstone, “Daddy Issues,” at the ’92 Theater. Featuring sketch comedy, musical numbers, and improv, “Daddy Issues” explores the highs and lows of the grieving process and the healing power of a good laugh to get over the loss of a loved one.

At the top of the show, Jones and Nefferdorf, both dressed in black, had a somber discussion about the grief they feel and felt as their fathers combatted serious health issues. Soon, the pair stripped out of their dark clothing to reveal matching sparkling, sequined outfits and performed a musical number. During the upbeat number, the pair sang, “Make it sad, make it sad but funny,” a lyric that perfectly captures the mission of the show: Finding humor in tragic experiences can play a significant role when coping with loss.

In a standout moment from the show, Jones told the story of his father having a seizure in the living room of his childhood home. Jones impersonated various people during this time of emergency—including his mother, a police officer, and a group of EMTs—and brought the house down with an impeccable sense of comedic timing. After his father spent an extended period in the hospital, Jones detailed his struggle to become the man of the house as a “delicate little princess” and to cope with his father’s declining health. In one of the show’s most triumphant moments, Jones exclaimed, “And guess what? He didn’t even die!” before pointing to his dad in the audience to great applause.

In her set, Nefferdorf was dynamic and irreverent as she spoke of navigating grief in the aftermath of her father’s passing. After her father died, Nefferdorf described getting a call from a friend and shouting, “I don’t know what to do! My dad reverse-Nemo-ed me!” Nefferdorf talked about how her friends tried to support her by permitting risky behavior to cope with loss. When she was feeling down in the dumps, her friends urged her, “Don’t kill yourself, you’re so sexy!” Nefferdorf’s true talent as a comedian is her seamless ability to turn grief into humor, inviting the audience to laugh with her at some of her darkest moments.

Short videos parodying individuals trying to cope with grief were interspersed throughout the show. In one video, Jones, Nefferdorf, and their friends impersonated celebrities trying to overcome grief. Jones impersonated Liza Minnelli in a short black wig and sequined outfit, capturing the icon’s frenetic energy by shouting, “I just wanna dance,” accompanied by a flurry of jazz hands. Other highlights included a frustrated Steve Irwin ripping up a picture of a stingray and a depressed Candace Cameron Bure mourning her career after making bigoted comments. Another video promoted a fake company called Spychiatry where parents disguised themselves as the psychiatrists of their troubled children. These videos added great variety to the show and highlighted Jones’ and Nefferdorf’s creativity.

At the end of the show, before a reprise of the opening number, Nefferdorf thanked a list of people without whom the show would not be possible. This moment was poignant, and the perfect note to end the show on. As much as “Daddy Issues” is about Ouija boards, inhumane amounts of casserole, and the theatrics of grief, at its core, the show is a story about the power of friendship when facing adversity. Through “Daddy Issues,” Jones’ and Nefferdorf’s stars are far and away on the rise.