“Inheritance” Intertwines Past and Present in Contemplative Exploration of Family 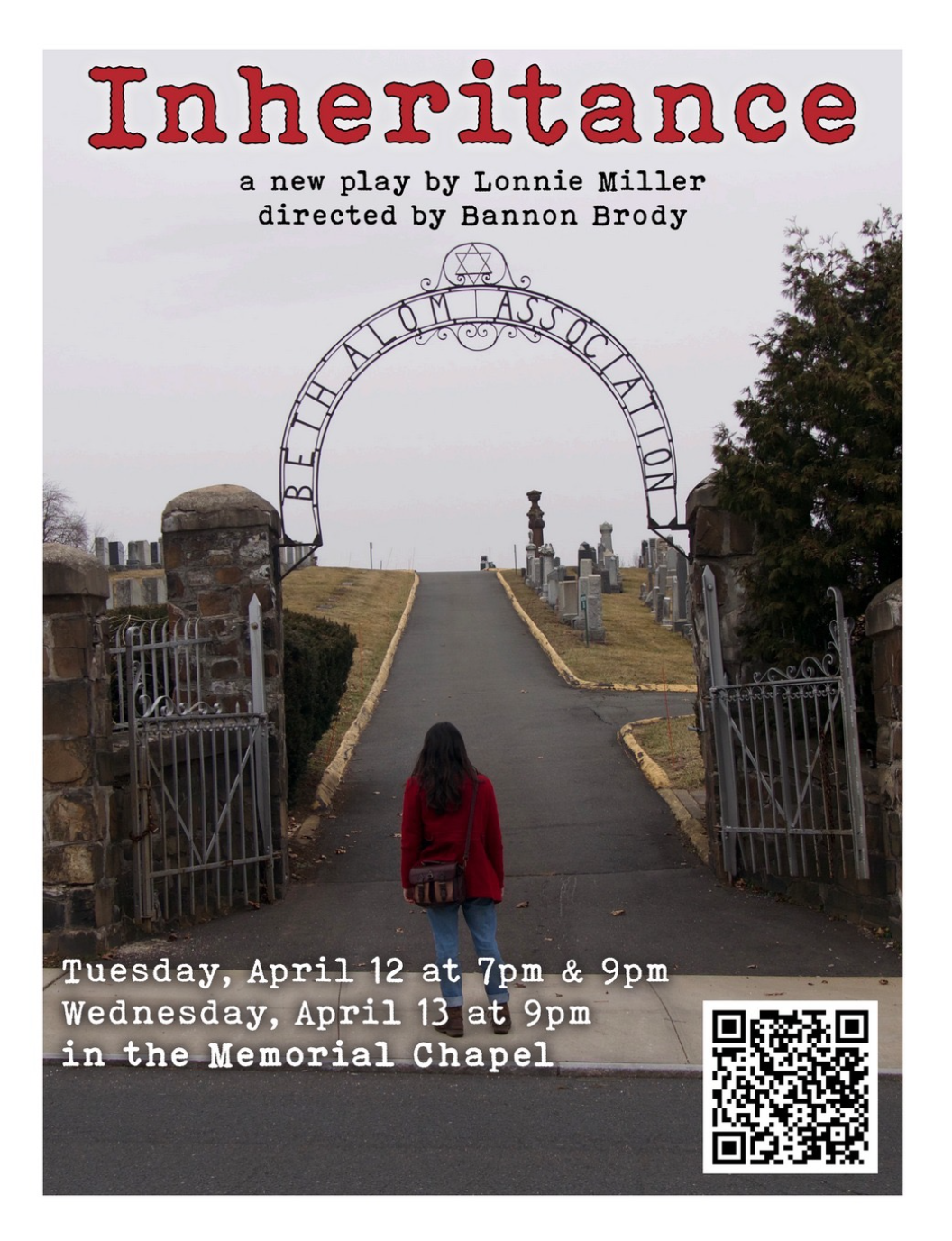 “Inheritance,” a play written by Lonnie Miller ’25 and directed by Bannon Brody ’24, will be performed in the Memorial Chapel on Tuesday, April 12 at 7 p.m. and 9 p.m. and Wednesday, April 13 at 9 p.m. The hour-long, one-act play tells the story of Maya, a young Jewish woman, as she uncovers the life of her grandmother, Libbie, through letters Libbie left behind. By intertwining scenes from both Maya’s and Libbie’s lives, the play explores themes of cultural and family connections.

Miller shared that “Inheritance” is semi-autobiographical, and that every character (except Maya, who is played by Miller herself) is based on someone from her own family history. Some of Libbie’s letters that are read aloud in the play are directly quoted from letters from Miller’s own great-grandmother.

“I’m really interested in what the immigration experience was like for my family, who I never knew, and I’m kind of disconnected from [my history] in that way, because we are now a very American family,” Miller said. “Once I started digging into [my history], my grandma also sent me a bunch of letters that my great-grandma wrote to my mom…explaining a lot about her life, a lot about her dad’s life again…. I read them obsessively for a summer and then decided to write a play about it.”

Though “Inheritance” tells a story that is specific to Miller’s family, many of the play’s themes are applicable to a wider audience with differing experiences.

“My experience in my family[’s] immigration is inherently a very Jewish and a very Eastern European Ashkenazi Jewish experience,” Miller said. “Some of our cast members have similar stories from their histories, some of our [cast] members have completely different family backgrounds and family history. But they all still are able to connect to the themes of not necessarily knowing the most about your history and your ancestors and trying to figure out what it means to even connect with those people who are so distant from you and who you kind of feel like you have not much in common with.”

This sentiment was echoed by the show’s producer, Elizabeth Laurence ’25, who both related to Miller’s story and its relevance to anyone struggling to reconcile the past with the present.

“I was so taken with the story…I did cry a bunch of times because it really just hits so close [to] home,” Laurence said. “[Miller’s words] reached out to me and I think they reached out to a lot of people who might feel loss of identity and who feel sort of a struggle of upholding the past, but also taking agency of their own life.”

To prepare for the show, the production team took a trip to New Britain, Connecticut to see where Libbie grew up and the play’s setting firsthand. While there, Miller saw parallels between the ways both she and her great-grandmother acted as historians of their time. The play’s set designer, Henry Owens ’25, explained that this trip made the story come to life.

“Being in New Britain did just make it clear…[that these are] very real people that we’re telling the story of,” Owens said. “It was actually kind of amazing ’cause Libby was documenting the history of the Jewish community in New Britain…. This was clearly something that she was passionate about and now her great-granddaughter Lonnie is doing the exact same thing.”

The “Inheritance” team paired up with Spike Tape, a new campus theater group, to produce their show. It is the first show Spike Tape is putting onstage, and though they faced challenges gaining access to equipment, costumes, and a performance space, the group is thrilled to be bringing back student theater at the University.

“It has been really rewarding to get involved in student theater again on campus, especially with…a group of people that are so dedicated to it,” Brody said. “Hopefully this will be the start…[of] a wave of new student theater on campus…. Working with Spike Tape has been great. They are so incredibly helpful and I’m really excited for them to grow as an organization and have more shows to work on and more opportunities.”

The “Inheritance” team encourages students to purchase tickets and come see the show, particularly for Tuesday, when Miller’s actual grandmother will be in the audience.

“My grandma is very excited about this play,” Miller said. “She loves to say that Libbie would be really proud of me, which makes my heart melt.”