The ReUser app, which was created by James Wilson ’17 and Luke Lira ’17 and tracks all of the Eco To-Go containers in circulation while they are being used, returned, cleaned, and reused. Students can select the option to use an Eco To-Go container when checking out through the Summies mobile app, Wes2Go. Then, when the student picks up their food, they will scan one code on a poster at Summies and another on the container. This lets them check out the container, which is represented by a token on the ReUse app. When the container is returned, the token is returned as well.

“[With ReUser, students] conveniently redeem a new container whenever they’re ready,” Wilson said. “The dining team…can then collect those containers once they’re dropped off and clean them, just as any other plate at the dining hall would be…. They can then be thoroughly run through an industrial dishwasher…before being put back into circulation where they can then carry through [the cycle] again.” 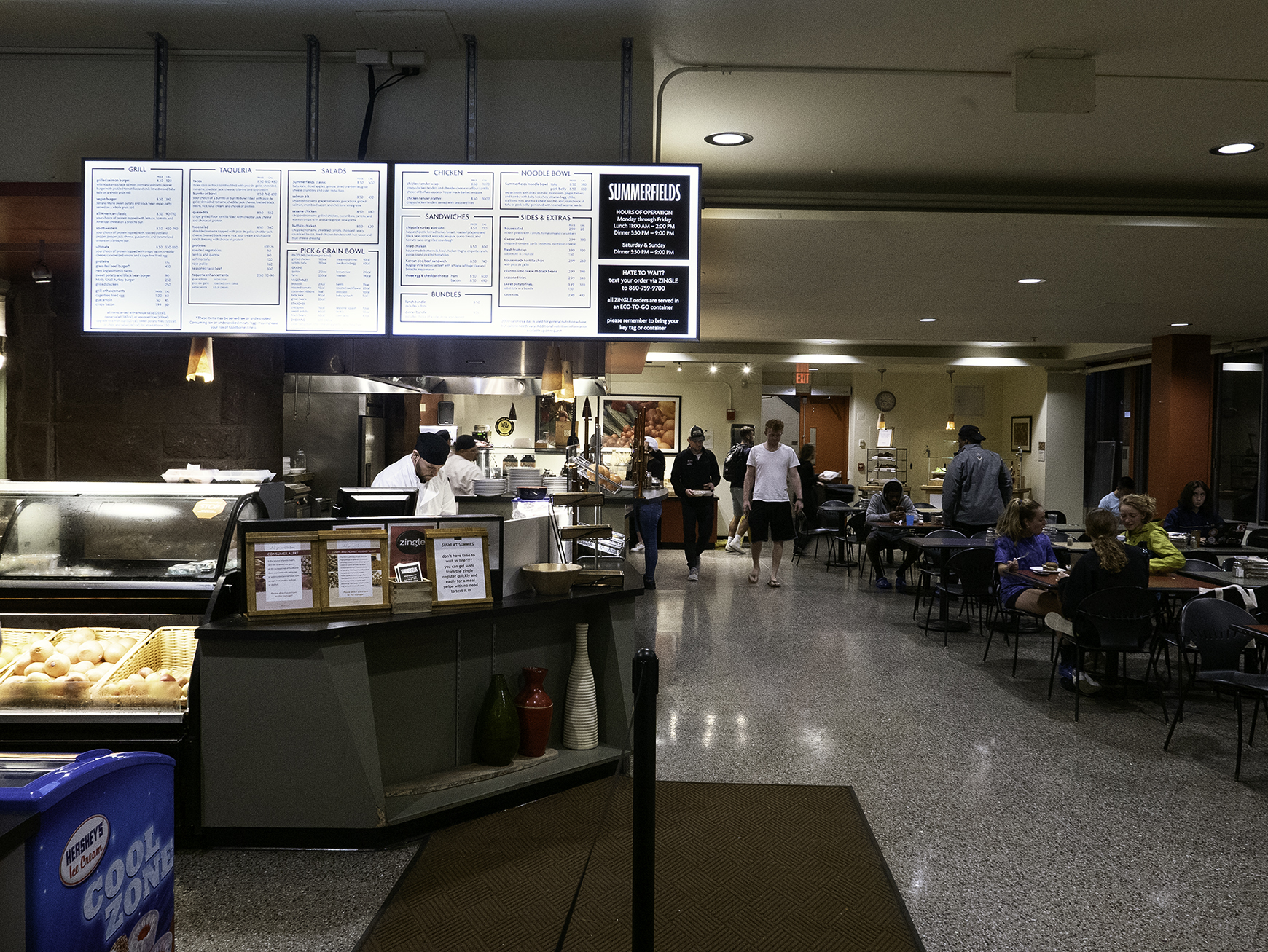 Wilson explained that he had loved using Eco To-Go during his time at the University and was frustrated by the lack of reusable options off campus. His desire to reduce his environmental footprint inspired the ReUser app.

“The goal with Eco To-Go is really to help solve this massive plastic waste crisis that we’re running into,” Wilson said. “It actually helps save the University money by not needing to continually repurchase containers over time…. [The University] also avoids the emissions involved with the manufacturing and the transportation of [disposable containers] to each location.”

According to Bon Appétit Resident District Manager Michael Strumpf, the University has previously run into problems with students forgetting their keychains and accidentally throwing away the containers. This led to a constant need to restock the container supply, which negated the positive effects of reusable containers. However, Strumpf hopes that the ReUser app will provide a more user-friendly solution.

“After James introduced the ReUser app to me, I thought that this would be a better, more customer friendly way to use the Eco To-Go program,” Strumpf said. “I think the students would be more accustomed to having an app on their smartphone and scanning a code.”

Wilson emphasized that he is always looking for ways to streamline Eco To-Go, including the establishment of a central location on campus to return Eco To-Go containers besides the dining halls. In addition, Wilson is dedicated to making the program as accessible as possible while maintaining appropriate cleaning procedures.

“The way that the program is set up is, we can certainly add more drop off locations,” Wilson said. “The main thing that we want to work…on is just making sure that if [drop off] does occur in a different location that it’s being done in in a sanitary way, that they can then know how many containers are being dropped off, and that they’re not continuing to build up without being…transported back to the dining locations where they can be cleaned.”

Nathan Weisbrod ’25, a frequent Eco To-Go user, echoed the desire for another pickup location. As a Butterfields resident, Weisbrod acknowledged that it is easier for him to use and return the containers than it might be for students who live in residence halls that are farther away. Weisbrod reasoned that additional pickup locations might entice more students to commit to using Eco To-Go.

“It’s really easy for me to, on my way out of the building, just drop [the container] off at the door,” Weisbrod said. “If you live far then are you going to go bring it back next time you order? And you have this dirty container you might not really want in your room for that long…. That’s why a [drop-off station near] different dorms might be helpful.”

Despite efforts to make Eco To-Go more convenient, it is still being used by fewer than half of the students on campus. Jasmine Fridman ’25, a student employee at Summies, reasoned that this may be due to a lack of information provided to students about the program. She supports the initiative because of its commitment to environmental sustainability and wishes that more students knew how it worked.

“I think it’s a good way to employ more sustainability practices at Wesleyan,” Fridman said. “I really like the concept because then you’re not just wasting a bunch of containers…but when people don’t know what they have to do, like when downloading the [ReUse] app…it’s just a lot of talking through with [students] and kind of telling them each step…. But it’s a really good idea…to have reusable [containers].”

Depending on the number of COVID-19 cases on campus after spring break, Eco To-Go may be introduced in Usdan Marketplace. Wilson also hopes to implement the ReUser app at other institutions.

“Right now, we’re mainly looking at organizations with dining halls to facilitate reusing,” Wilson said. “Wesleyan is the only group that is currently running with us, but we’re also hoping to facilitate other universities that have cleaning infrastructures in place [and] central locations where people can return these containers most easily. So that’s universities, hospitals, and also corporate campuses that have cafeterias to most easily facilitate and get dining behavior ingrained to help move towards reducing this waste wherever possible.”

Weisbrod encouraged more students to use the program in the hopes that the University can further reduce its environmental impact.

“I’ve definitely noticed an uptick in usage, just based on the number of containers on the [pickup] table, friends who are using it, [and] containers in the return bucket,” Weisbrod said. “I hope to see more users joining in the coming weeks and months.”