WesCeleb Caroline Pitton ’22: The Short One with Bangs Who Works in Admissions 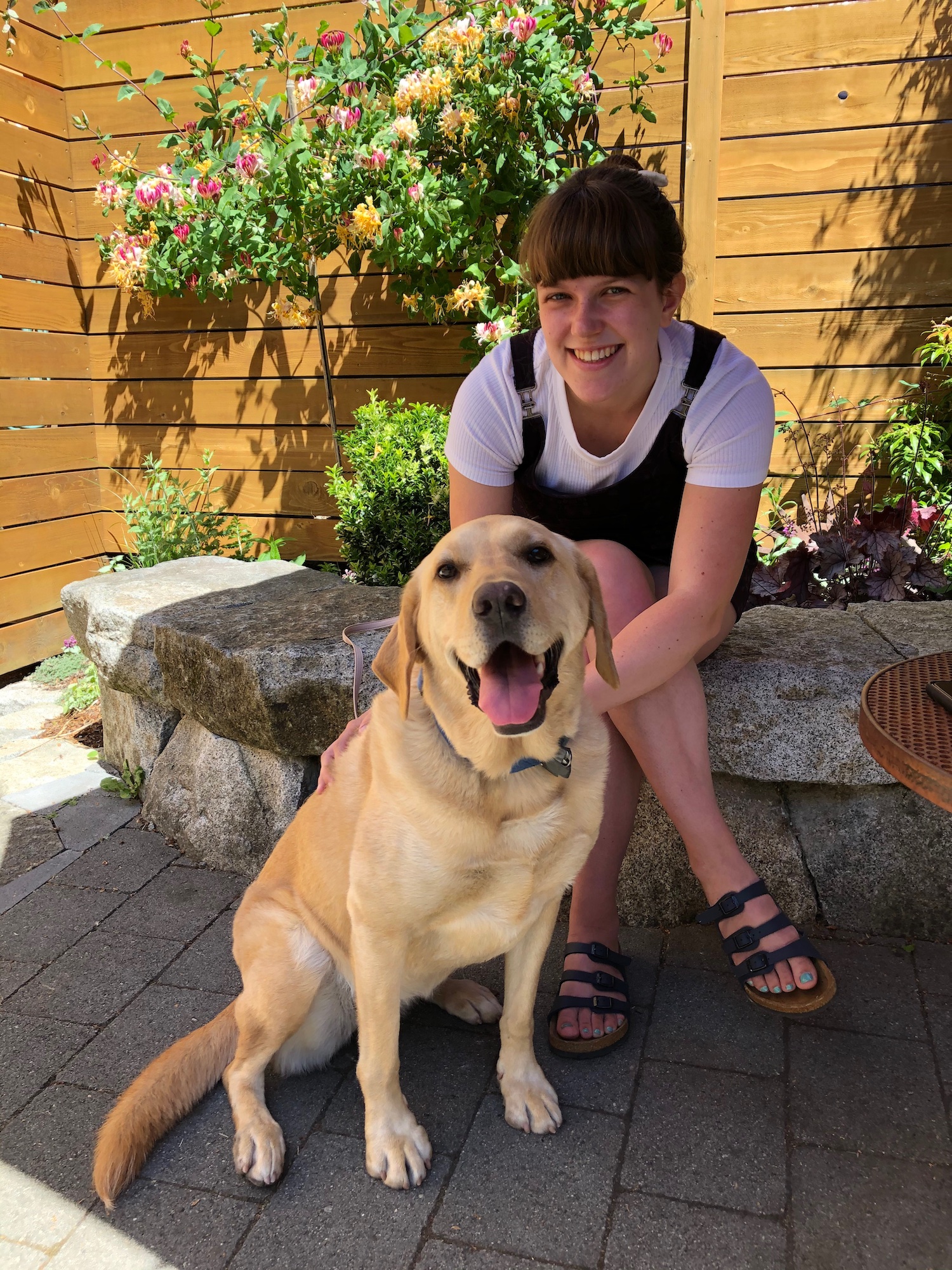 One of the best known faces to students even before they enroll at the University, Caroline Pitton’s ’22 smiling face framed by her famous bangs is plastered on the wall of the admissions office, where she can frequently be found when she is not working in a research lab, TAing, or singing. The Argus caught up with Pitton to talk about her time on campus and her future beyond it.

Caroline Pitton: I was genuinely so surprised when you told me ’cause I don’t think I know enough people to be a WesCeleb. I feel like I just walk around and recognize most people that pass me, but I think I have a very public-facing job. I work as a senior interviewer in the Office of Admission, and I’ve worked in admissions since literally the first week of my freshman year. I used to plan WesFest and Open House, and now I talk to prospective students a lot. That job is the most fun place to work on campus. Everyone who works there is so outgoing and friendly. I also TA a lot so if you took intro bio or intro chem or some French classes, chances are you’ve seen me as your TA.

A: What are your majors?

CP: I’m a biology and French double major with an informatics and modeling minor. I came into Wesleyan knowing I wanted to do biology, and then my pre-major advisor was a French professor and that was a happy accident. Then, I did my minor almost completely by accident. One day [I] was talking to another bio major and figured out that I’d done five of the six credits for [the modeling] minor.

A: Did you speak French prior to coming to Wes?

CP: My mom’s entire extended family lives in France. They do not speak English whatsoever, so she spoke to me in French when I was a baby, and that kind of tapered off, especially when my brother was born and life got wild. I went to a French and English school and all of the kids who went there only spoke French, so I really had to learn how to speak, to communicate with my classmates. I wasn’t super invested in the study of French language and culture until I got a couple years into college and I realized how fun it is to speak another language and think about cultures that aren’t those that you’ve grown up in.

A: How did you know you wanted to be a bio major?

CP: I was really supported in my science classes in middle and high school. I thought I might want to be a math major at some point but I took intro bio as a freshman in my first semester. I went in and I was like, ‘I think I wanna be a bio major, but if I hate intro bio, it’s okay to change my mind.’ I loved it, but I think it’s not a given that biology majors like intro bio [because] our intro bio curriculum is challenging and fast-paced and intense. Every bio class I’ve taken since then I’ve liked even more. It’s my favorite academic discipline in the world. I could talk your ear off about biology. That’s what I want to do academically and career-wise in the future. Biology is what I want to think about every day.

A: Have you had a favorite class or professor at Wesleyan?

CP: My favorite professor at this university is Professor Joe Coolon in the Biology department. He’s my research advisor. I’ve been in his lab since I was a sophomore and we study genomics in fruit flies and yeast. He is one of the best teachers and academic mentors I could ever ask to have. Every time I talk to him, he makes me so excited about science. He has this really infectious energy. He always wants to know what’s going on, with my work but also with my life and with my future plans. And he creates a really fun lab environment where everyone works together really well and is genuinely friends in and outside of the work environment.

A: What are you researching?

CP: I spent my whole junior year and the summer after my junior year researching a system in fruit flies that we can use to turn on and off the expression of specific genes, which is very niche. But I looked at this one system and I did a lot of bioinformatics analysis and then I finished that project over the summer, and now I’m working on a few other projects. They all have to do with what happens when we expose fruit flies to different environmental toxins, like pesticides, and what happens in the fruit fly genome. Like, which genes get turned on? Do some genes turn on more than other genes? Do they turn off? How do those genes interact?

CP: Up until this semester, I sang with Onomatopoeia, the acapella group. I had to take a step back from that this semester, but that was one of the most formative and most fun parts of my college experience. I also music directed two shows for Second Stage my freshman and sophomore years. The friends that I made doing theater and acapella, I still hold so closely.

A: You mentioned that you started working in admissions the first week of [your first] year. How did that happen?

CP: I walked on campus and I was like, okay, I need to find a work-study job. And they have a job fair with a table for admissions. I was like, that seems like a fun place to work. As a [first year], it’s one of the only offices at Wesleyan that you are aware exists because it’s the office that you interact with before you are a student. I literally just filled out an application for a random job, which happened to be the intern job, which is event planning mostly. I met a lot of really cool people through it, and working in the Office of Admission gives you a really nice support network of other students, but also the professional adult staff that work there. Going to work three times a week and seeing the same people and having office chit-chat and building those relationships that still exist three years later was really stabilizing.

CP: I’m going to be a research associate in a lab at the Dana Farber Cancer Institute in Boston. I’m working in a lab that studies the genetics and genomics of blood cancers. I’m also really lucky that I found a job this early. It’s a lot of biology concepts that I learn about and I practice in my undergraduate lab and classes, but it’s applied to medicine and to people in a way that we don’t do at Wesleyan, which is really exciting to me as someone that wants to work more in medical research and human genetics in the future.

A: How do you think your friends would describe you?

CP: They make fun of me for how much I talk about flies, but also people know me as having bangs. So when we have conversations about how my housemates describe each other to people that don’t know us, I am the short one with bangs who works in admissions.

A: Did you ever not have bangs?

CP: I have quite literally never not had bangs. At my first haircut where I had a substantial amount of hair, my mom said, I think bangs would be cute. And I was two years old, and now I’m 21 and I still have bangs. I considered growing them out during COVID-19, but then I had an identity crisis. And I was like, “I’m gonna come back for my junior year in a mask and I’m not gonna have bangs. No one will recognize me; the bangs have to stay.”

A: Do you have a favorite Wesleyan story?

CP: One that really stuck with me, especially during COVID-19, was in February of 2020. Ono and Slender James threw a kegcert, which is a concert with a keg in a Fauver. It was the weekend before spring break and it was probably the most fun concert that we’d ever done in anyone’s memory of people that were in Ono at the time. The singing, I think, was good, but it was more like, the energy was really exciting and it was a packed Fauver. All of our friends were there and were screaming and people were dancing. I remember finishing that concert and everyone in Ono was like, “That was so fun. We have to do that again.” Then obviously we all went home and [didn’t come] back. I think for a long time, especially last year when no one was socializing, that was something that I really held onto as being like the last real party that I had been to. And it was such fun—there was nothing bad about that night.

A: What are you most proud of in your time at Wes?

CP: I’m really proud of how I pushed myself out of my comfort zone to try new things during my time at Wesleyan. I didn’t become complacent. I mentioned doing student theater. I had never done theater before college. That was totally out of my comfort zone, and I’m so glad I did it. I had so much fun and I learned a lot. Same with research. I didn’t think I wanted to do research and then I tried it, and now it’s literally what I’m doing for a job next year. And same with the French major. I had never thought of myself as a humanities person, and now I read French literature. I’m proud that I didn’t box myself into only doing one thing and how much I got to learn from my peers at Wesleyan. I think that other students are what make this place so special. I’m glad that I really took advantage of getting to know everyone around me.