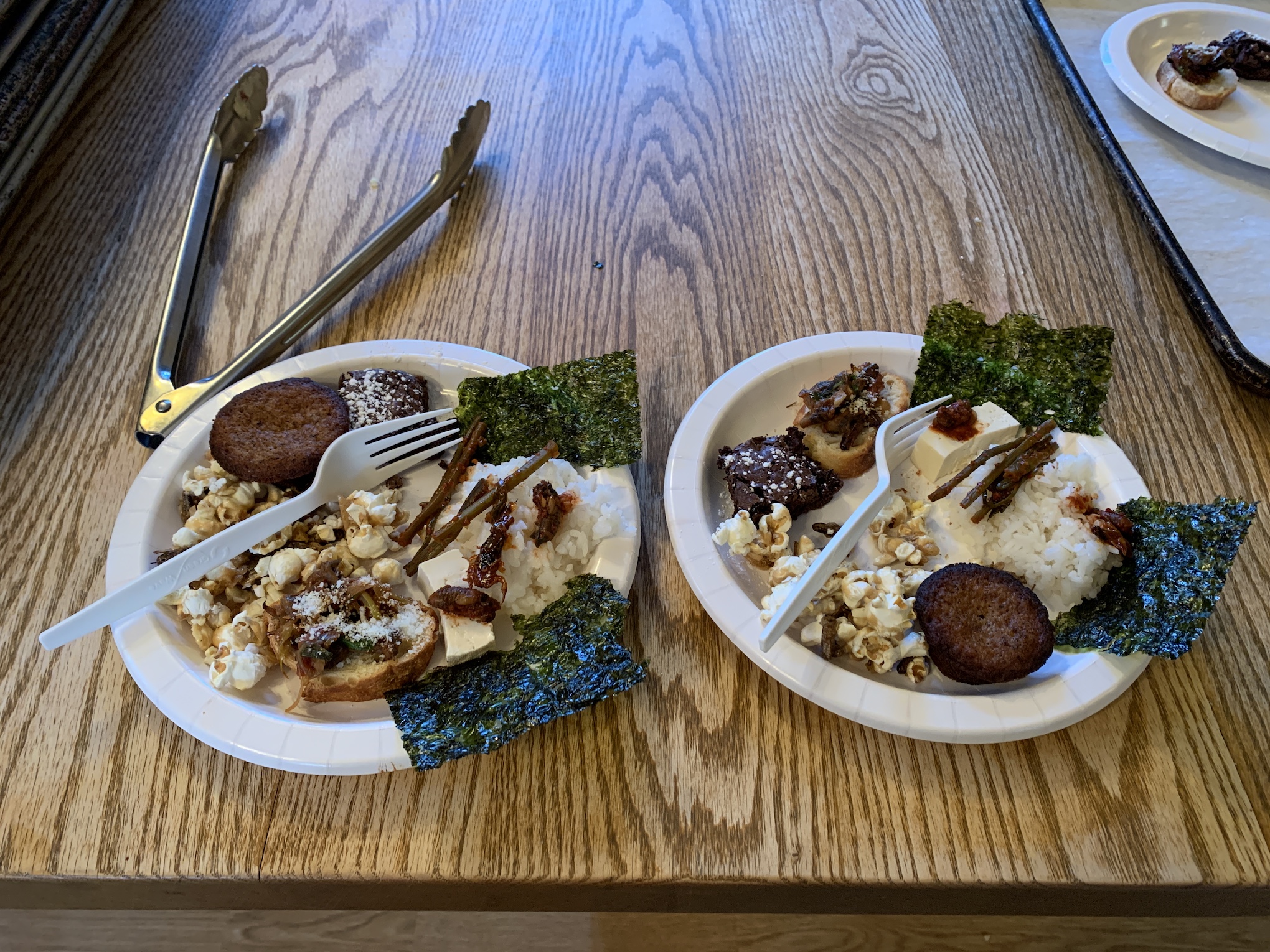 Rather than eating turkey, mashed potatoes, and green beans, some students opted for cricket gougeres, grasshopper blueberry muffins, and mealworm chocolate brownies at Bugsgiving. Megan Levan ’22 hosted the event as part of her senior thesis on entomophagy, or the practice of eating insects, on the lawn in front of Alpha Delta Phi on Saturday, Nov. 20 .

Despite the cold weather and the rise in COVID-19 cases on campus that week, around 75 attendees gathered to taste a variety of dishes incorporating bugs prepared by Brooklyn Bugs chef Joseph Yoon.

Levan explained that her thesis, and thus the event, were motivated by her personal ideals.

“I went into my thesis very firmly believing in all of these very positive environmental benefits of entomophagy,” Levan said. “I do think that through doing all this research for my thesis, I still see enormous potential for insects as…mitigators of world hunger and climate change.”

Levan’s thesis examines the current status of entomophagy in the United States, particularly after the United Nations Food and Agriculture Organization published a journal article in 2013 discussing the benefits of insects as food, which led to the genesis of small businesses that make insect-based snack products. Levan came up with Bugsgiving as one way to make entomophagy more accessible to the community.

“It was free, I tried to advertise it all around campus, all around Connecticut to a certain extent, and I just wanted it to be something educational for anyone remotely interested,” Levan stated.

Yoon immensely enjoyed working alongside Levan at the event, which was the third Bugsgiving that he has prepared food for.

“We had a lot that we had to deal with in trying to produce an event of this nature and promote it and introduce an idea that could be really disgusting for a lot of people,” Yoon said. “It gives me a great sense of hope to know that there are such great, young, talented minds out there that care and that want to work in [entomophagy].”

Yoon worked to create a menu with a wide range of food options, to show the broad applications of insect protein.

With this in mind, Yoon designed one-half of the menu to resemble American dishes. These plates included the cricket gougeres, grasshopper blueberry muffins, and cricket mashed potatoes.

The second half of the menu highlighted Korean and Asian food, which included cicada kimchi and a gochujang marinade with scorpions. Yoon included these dishes as a way to incorporate different food cultures.

“People can all too often shun an idea that’s all too new to them,” Yoon said. “It gives a really wonderful learning opportunity to say ‘Hey, you know, there’s a lot of people around the world that eat edible insects, not out of desperation or necessity, but because it’s a food they enjoy.’”

Charlotte Babbin ’22 decided to attend Bugsgiving both for the new experience of eating insects and to support Levan. Babbin enjoyed sampling the various dishes.

“I think I would recommend [edible insects] when it’s prepared by someone that you know and trust,” Babbin said. “Overall it tastes good if you can get over the ick factor in your mind.”

Janit Romayko GLSP ’10 attended Bugsgiving, and convinced her friend, Middletown resident Julia Woron, to attend as well. Romayko read about the event in the Hartford Courant, and was excited to show support for the environmental impact of entomophagy.

Bugsgiving was moved entirely outdoors after COVID-19 cases rose on campus. Levan and Yoon had planned to host an insect petting zoo inside Alpha Delta Phi, but decided to cancel the activity in light of the risk posed by the pandemic. Yoon said that he was impressed with Levan’s willingness to be flexible.

“I just could not be prouder of Megan’s resilience and her spirit,” Yoon said.

Despite the challenges posed by the increase in COVID-19 cases on campus and the cold weather, Levan and Yoon were proud of how Bugsgiving went.

“I feel like honestly everyone had some pretty rave reviews, and people seemed excited about having a similar event in the future and other ones,” Levan said. “So maybe the petting zoo will have to make its debut in the spring.”

Yoon recommended that anyone interested in exploring a bug-based diet follow his and Levan’s work. Yoon posts recipes on Instagram, and Levan hopes to host more events promoting entomophagy.

“I certainly welcome Wesleyan staff and students and the community to get in contact,” Yoon said. “Hopefully…this is the first of many things that we can work on together.”