Route 9 Brings a New Outlet for Print Literature to Wesleyan 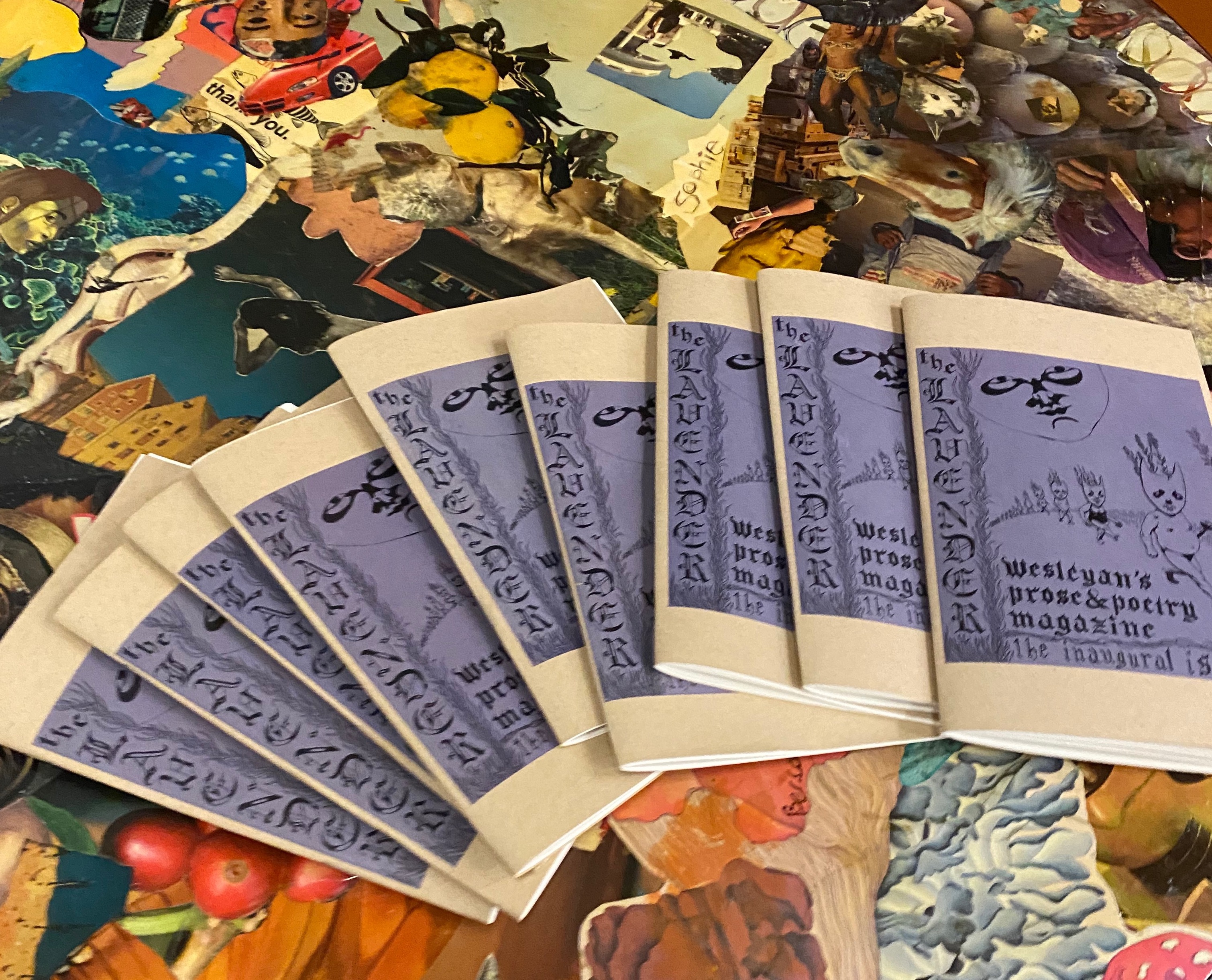 After months of planning and fabricating, Route 9 Literary Collective released the inaugural issue of The Lavender, their student-based poetry and prose magazine, in a launch party at Espwesso on Tuesday evening. Spearheaded by Editor-in-Chief Oliver Egger ’23, the multifaceted project represents a new chapter for the University’s creative scene. Creators hope to synthesize a range of student and community work into physical pages and person-to-person interaction.

The first thing I noticed upon entering The Lavender’s launch party and reading event, besides the sheer volume of magazine copies placed throughout the café, was the people. Poets, writers, and visual artists filled the space, far outnumbering the magazine’s editorial board gathered towards the podium. Since its establishment by Egger, the Route 9 collective has striven to create such a vibrant community, with The Lavender embodying the student-focused branch of that goal.

“I’ve been writing poetry since I was a young person,” Egger said. “It’s always been a space of community and real calm and joy for me. It’s just so fun to interact with poets and talk and work together and create beautiful art together, so I think when I came to Wesleyan my freshman year, I was majorly disappointed in the literary scene.”

While Egger recognized the existing high-quality output from campus publications such as The Ankh, he saw open space to contribute even more to the literary milieu. With community outreach in mind, Egger sought an outlet that would be well supported by his creative abilities while also bringing together contributors from the University and beyond.

“I think that the way that people should do community activism is to ask, ‘What are your strengths?’” Egger continued. “I know my strengths aren’t going to be in grassroots organizing in the traditional way; that’s not what I’m best at. So I thought the way I can be more socially-involved is really to bring what I love and try to create a community around literature.”

One key to unlocking this expanded community was the physical, which has eluded every type of creative work since the onset of COVID-19. Egger co-founded Route 9 in the unfortunate month of February 2020, almost predicting the void of person-to-person interaction that was to follow. His emphasis on physicality nevertheless began before the pandemic, when he recognized a lack of something palpable to unite the disparate creative energies of the University’s artistically rich campus.

“Print is key for people to engage with literature on a college campus, [especially since] we’re a small college,” Egger continued. “That’s what creates interaction, and that’s what creates community conversations. And that’s even more important for something like poetry where people naturally don’t care about it. It’s poetry. It’s the most uncared for form of art in the world. So you have to really put it out there, make it beautiful, make it an event, and you can only do that through print.”

Behind the magazine’s production, a strong group of editors including Prose Editor Immi Shearmur ’24 share Egger’s focus on materiality as a way to create community. Arriving at the University amid isolating pandemic precautions, Shearmur said that her drive to re-spark physical connections informed her interest in the magazine.

“What I’m learning increasingly is I think a lot of the things that make Wesleyan so special were displaced because of COVID,” Shearmur explained. “I think that Wesleyan really prides itself on a thriving community of writers…so it’s really important that we kind of get these things up and going again so that artists have a way of finding each other and creating those communities that were depleted.”

The value of binding creativity to printed pages became clear as soon as I picked up The Lavender’s first issue. Flipping past the booklet’s lavender-colored cover (a reference to the University’s first official color, which was changed to the current cardinal red in 1884) revealed an intriguing creative topography of the campus, complete with poetry, prose, photography, and illustration from students from all class years. Poems of various layouts gave way to eclectic photographs and drawings of figures, landscapes, and anatomy, all in conversation with each other while retaining individual space.

With ambitions of reinvigorating an entire campus’ literary spirit through these pages, the editorial team of The Lavender grappled with understandable technical challenges along the way.

“We had a couple, you know, fiascoes throughout the design process, like battling Adobe InDesign, battling the printer, but I feel like we came out victorious,” Design Editor Annie Wendorf ’23 explained. “It’s better that way almost. It’s nice to do things with your hands and then feel the reward of it coming to life before your eyes. Especially with the book, because you see the physical process of printing each page and then folding it and binding it and then getting to flip through it. It’s the most satisfying thing in the world.”

The physical booklet’s impact was well complemented by its in-person release event at the recently reopened Espwesso. Reading their work to a full room of students, the magazine’s contributors brought the printed text to life, making sure to call out the pages on which their pieces were featured before starting so that everyone could follow along. As the crowd rustled through pages rich with experience and perspective before listening intently to the speakers, one could hear cultural engagement in action. It soon became clear that this kind of interaction could only occur in a physical setting, on pages meant to be read aloud, shared, and read again.

As successful as The Lavender and its accompanying release event has been in bringing campus creativity to life, they represent only the beginning for the Route 9 Collective. From chapbooks to an anthology that will bring together voices from University faculty, staff, and students and Middletown residents in one place, the collective looks to future creative possibilities with an enterprising spirit. With such projects in the works and a new issue of The Lavender already accepting submissions, the group has laid a solid foundation for continuously expanding creativity. As everyone on the Route 9 team emphasized, though, it is up to the community to make the project happen. The Lavender’s editorial team encourages submissions to the collective’s projects via their website.

“I’m really proud of the people who’ve joined this club and the people who care about it,” Egger said. “It’s amazing to see people believing in it and caring about it. It’s hard to start something new. We don’t have any grounding, and so I’m really proud of it. Seeing how much people have committed to the first issue, from here I believe that we can create something beautiful that will connect with students at Wesleyan.”

Follow Route 9 on Instagram. Feel free to reach out to Oliver Egger oegger@wesleyan.edu with questions or project proposals.