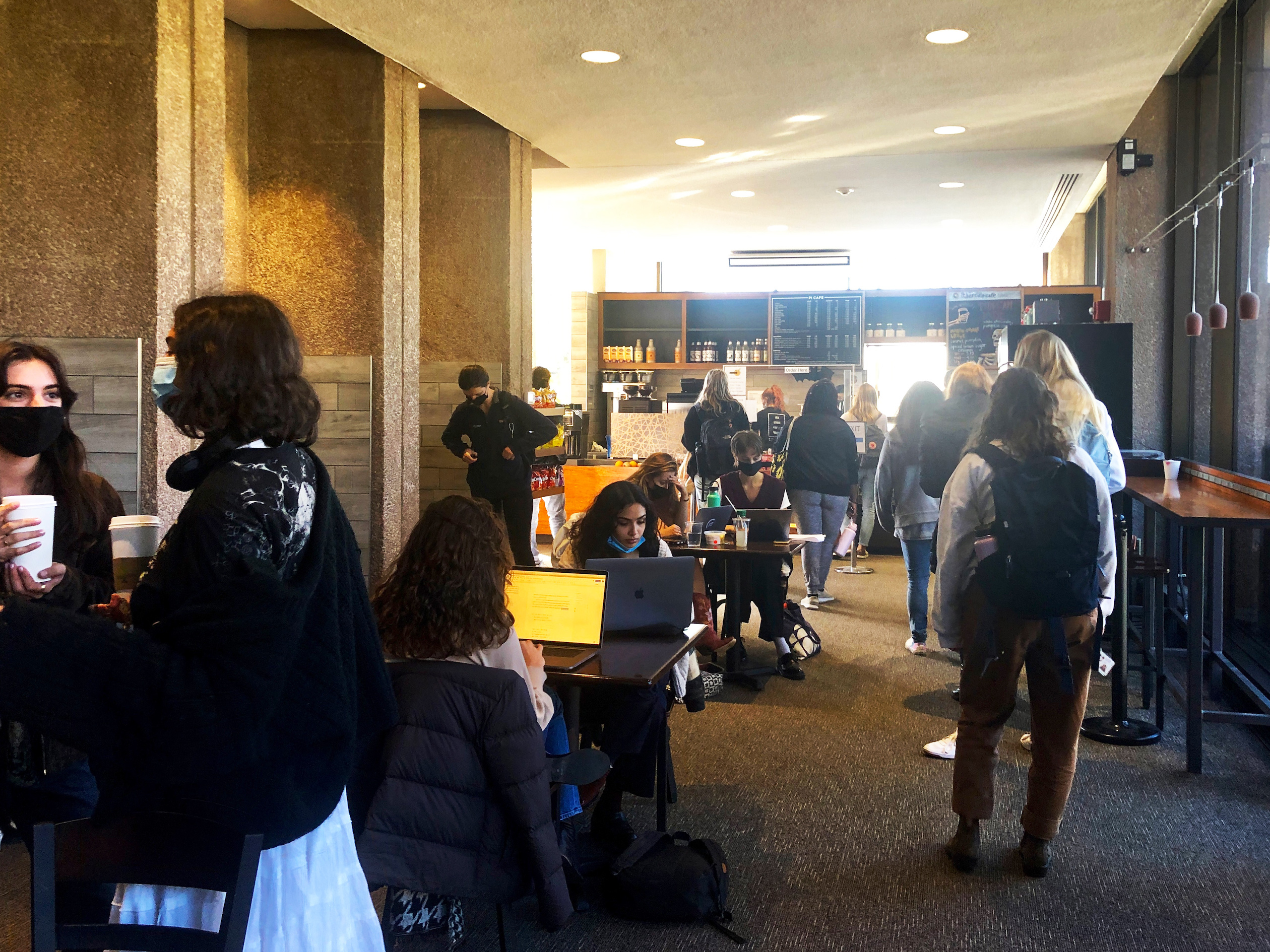 Pi Café, WesWings, and Red and Black Café reopened indoor seating on Oct. 12, Oct. 26, and Oct. 28, respectively, due to the low number of COVID-19 cases on campus and Middlesex County’s low transmission rate. Indoor dining is currently at 50% capacity to minimize COVID-19 transmission.

WesWings and Red and Black Café co-owners Ed Thorndike ’89 and Karen Kaffen-Polascik planned to exclusively offer outdoor dining until Fall Break, but did not have concrete plans for what would come next. The low number of COVID-19 cases allowed them to open indoor dining after the break.

“As we took a look at it, the numbers—both on campus and in Connecticut—were really good,” Thorndike said. “The community spread, the numbers are fairly good, especially in Middlesex County. We have a staff that’s 100% vaccinated, we have a student body that is 98–99% vaccinated, so we’re in pretty good company.”

Thorndike and Kaffen-Polascik decided to open indoor dining at WesWings first as a test run.

“We wanted to wait and see how things were going with WesWings and how that was working and how our staff felt and just how it went,” Thorndike said. “The staff at Red and Black came to me and they said, ‘We think it’s time to slowly start.’”

Thorndike added that he and Kaffen-Polascik were hesitant to open Red and Black indoor seating because, in prior semesters, students tended to use it as a study hangout when it was open.

“Red and Black is a place where people come and they stay all day, especially on the weekends,” Thorndike said. “People come with their laptops, they’ll come at 9 in the morning, and they will be there all day and that’s not what we’re looking for. That doesn’t help if you only have 10 seats, and they’re filled up with someone on a laptop all day…. You want it to be turned over for enough people. We’re hoping the people will not spend too much time there after they’re finished eating.”

According to Kriksciun, who oversees Pi Café and Weshop, students staying at Pi Café after they have finished eating and drinking is not a concern.

“I don’t think that’s ever been an issue, between people going to classes and having different things to do” Kriksciun said.“We have some regulars that are there probably more often than others but there’s no way to really force people to leave after a certain amount of time.”

Kriksciun emphasized how successful indoor dining has been so far at Pi Café. 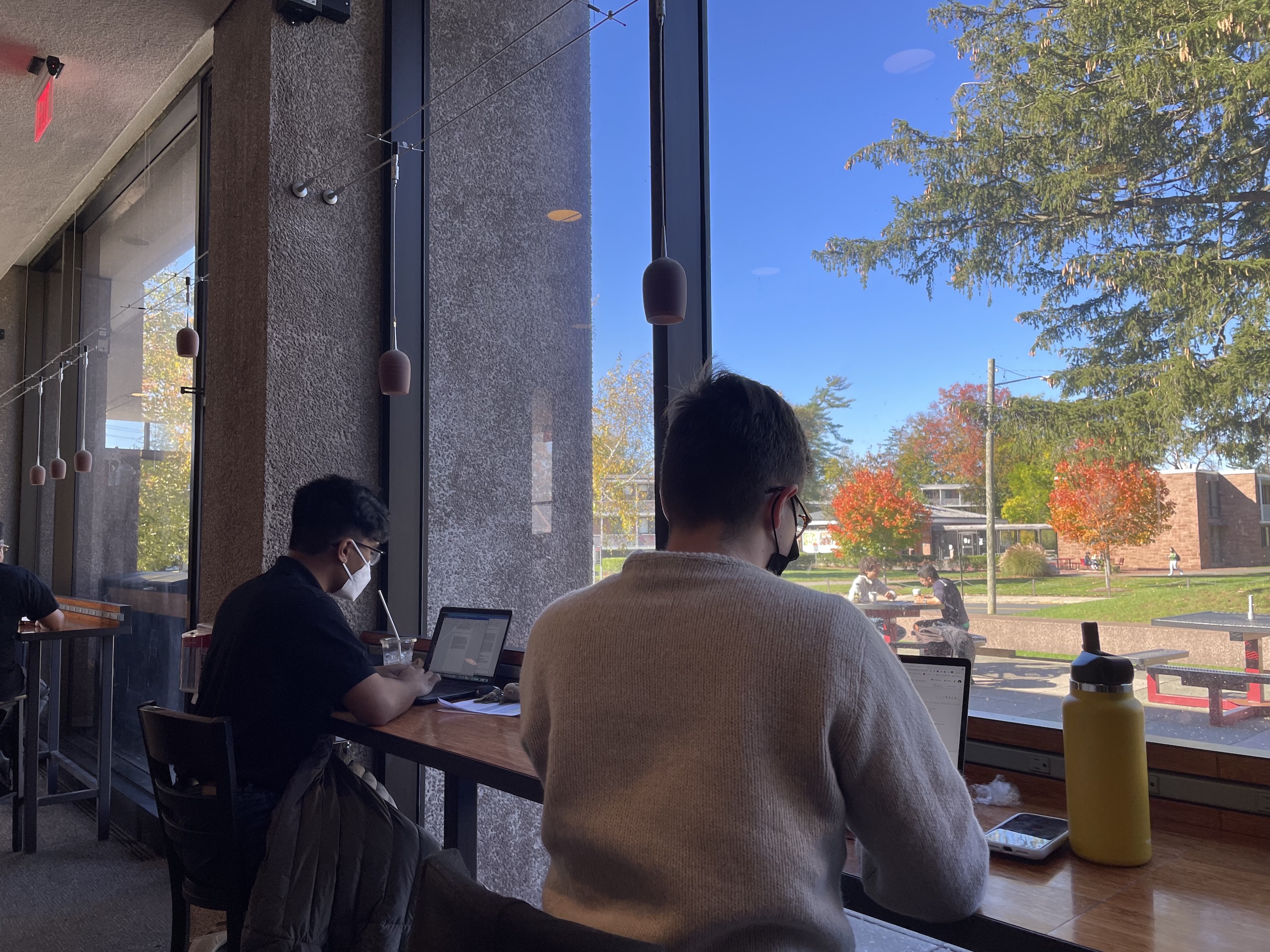 “It’s going great,” Kriksciun said. “Seating filled up within a couple hours. People saw the open seats and took full advantage right away, which was exciting for everyone who works there, I think, to have people sitting again and bring some normalcy back to Pi.”

Thorndike expressed similar sentiments, noting that while indoor dining has returned, certain COVID-19 adjustments will stay in place. For now, WesWings and Red and Black Café will continue to use to-go containers, and the patio will likely be a permanent addition to WesWings.

“The patio is gonna stay,” Thorndike said. “Last year, the patio we had open all the time because we had such long lines and we were doing it to try and feed as many people as possible. Now it’s going to be more of a special-events-type thing. We’re going to be always using it for weekend brunches, and special things like when we do the tacos. It works well outside. If there’s certain nights where we’ve got the staff and certain dishes we want to do, we’ll do it.”

Pi Café, WesWings, and Red and Black Café are still waiting to see how having indoor dining at 50% goes before returning to full indoor seating capacity.

“We’re taking it slow with a few seats, just to get everyone comfortable with the idea again,” Thorndike said. “It’s been a long time since we had inside dining. A year and a half or more since we’ve done this. But it feels good. It’s a nice sight and comforting to see it. Even if it’s in small amounts.”