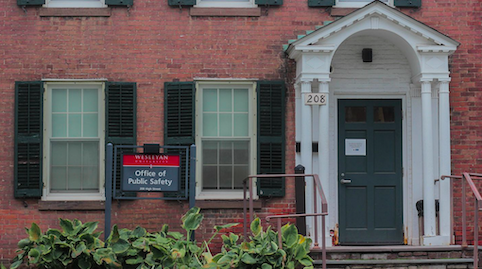 The Office of Public Safety (PSafe) released its Annual Campus Security and Fire Safety Report in an all-campus email on Oct. 1. The report includes data on incidents that prompted a response from PSafe between the 2018 and 2020 calendar years. The report also details University policies and sections of Connecticut state law relating to incidents covered by the Code of Non-Academic Conduct, including sexual assault, weapons possession, fire safety regulations, and alcohol and drug policies.

Crime incidents cataloged in the report decreased in almost all categories, including alcohol and drug violations, in 2020. Public Safety Director Scott Rohde explained that the decline was related to the University’s COVID-19 restrictions throughout the year.

“Because there were significantly fewer students on campus during certain periods, activity patterns shifted,” Rohde wrote in an email to The Argus. “When students did return there were still significant restrictions and controls in place to protect the campus community and this contributed to lower numbers.”

Other incidents also declined as a result of the shortened spring 2020 semester, when students were sent home in March following the outbreak of the pandemic. On-campus liquor policy violations declined from 299 to 136 between 2018 and 2020. The same downward trend held for on-campus drug abuse violations, which decreased from 109 to 14 violations between 2019 and 2020. However, Rohde expects that these statistics will begin to resemble non-pandemic years as COVID-19 restrictions are loosened.

“We would expect a return to more normal numbers,” Rohde wrote. “It should be noted that in general (pre-COVID) our numbers related to alcohol and drug incidents have been declining.”

While many types of crime decreased on campus, other statistics trended differently. The value of property damage due to fires increased. Though the number of fires decreased from six in 2019 to three in 2020, the total value of property damage increased from $3,200 to over $41,000 in 2020. Rohde explained that maintenance costs from exceptionally destructive fires contributed to this increase.

“Fires related to cooking are most common and typically result in minimal or no damage,” Rohde wrote. “Where you see larger damage amounts they are typically related to clean up and restoration costs related to fire suppression efforts such as from sprinklers.”

In addition to statistics on crimes, the annual report also lists protocols that students should follow when addressing incidents they witness or are involved in, including information on the appropriate timelines for sharing incident details with PSafe and the details of the University’s emergency notification system.

The report lists the addresses and phone numbers of various campus offices, including the Office of Residential Life, Office of the General Counsel, and the Office of Student Affairs, which provide services for students who have experienced or witnessed crimes. The opening section on sexual assault offers the most extensive list of resources, including references to CAPS and the Title IX Office and descriptions of how students can use these resources.

“Students are afforded a wide array of services and resources when reporting incidents or after a student is involved in a particular situation,” Rohde wrote. “Officers routinely share information about other campus resources with students. Many times they engage them while still with the student reporting the incident. Officers also make referrals to on-campus resources so that offices outside of Public Safety can provide expertise and assistance.”

Although PSafe is the primary security presence on campus property, the public roads and properties around campus are under the jurisdiction of the Middletown Police Department. However, the Middletown Police do not typically surveil the streets around campus as heavily as they do other parts of the city. Rohde explained that the two agencies do work together when needed.

“We are mutually supportive agencies and correspond frequently,” Rohde wrote. “Police officers do not provide routine patrol on campus but are asked to assist with major investigations or criminal activity that is outside the scope or jurisdiction of Public Safety.”

According to Rohde, the report’s formatting and content are similar to other campus safety reports published by other colleges and universities, many of which are required by law to publish one annually. He explained that he sees the report as an accessible way of informing students about campus security measures and policies.

“The report remains on the public safety website and other locations year-round and is intended to be a useful resource,” Rohde wrote.

Niall Calvert can be reached at ncalvert@wesleyan.edu.