WesCeleb Ariana Baez ’22 on the WSA, the Importance of Education, and Legacy at Wes 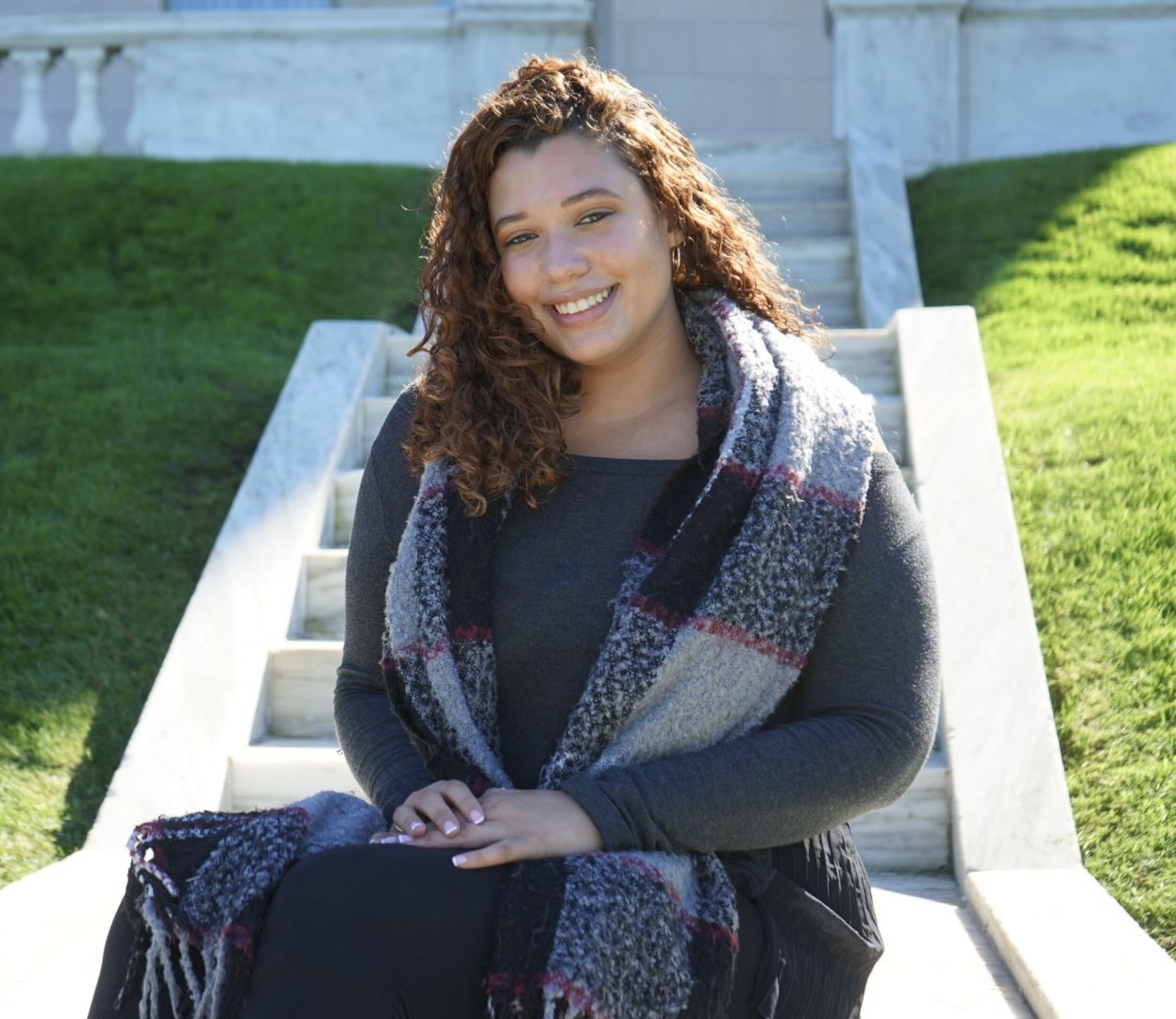 Throughout her time at Wes, Ariana Baez ’22 has left an indelible impact on campus. As Vice President of the WSA and a senior interviewer for the Office of Admissions, Baez strives to make the University a more inclusive place for current and future students. The Argus caught up with Baez to discuss the American Dream, working with rambunctious second graders on Zoom, and her favorite Wesleyan memories.

The Argus: Why do you think you were nominated for WesCeleb?

Ariana Baez: I think I got nominated because I’m pretty involved in the Wesleyan community. I’m the Vice President of the Wesleyan Student Assembly (WSA) and last year, I was an Equity and Inclusion Chair of the WSA. But in general, I feel like I’m a pretty open presence [on campus]. Every time I’m walking to class or walking around campus, even if I’m trying to go incognito mode, it’s kind of impossible.

A: You just mentioned the WSA. Can you talk a little bit more about your involvement with them?

AB:  I think that I have created a legacy for myself within the WSA because last year, before assuming the position of the Chair of the Equity Inclusion Committee, it wasn’t a committee within the bylaws. There weren’t any senators that sat on the committee, it was more of a subcommittee with the understanding that every single standing committee would have equity and inclusion on its mind and in its work, but that didn’t sit right with me. When I assumed the position, I made sure that my first task within the WSA was to institutionalize the Equity Inclusion Committee within the bylaws and constitution. Now, moving forward, it’s a standing committee with four senators. I’ve tried to change the way the WSA is perceived by the student body. When I was a freshman, I didn’t think I would ever be able to be a senator on the WSA because it seemed like a white man’s club. It [seemed very] detached from who I was within my identity. It didn’t seem like an open place where I could make a difference.

At the end of my sophomore year, I felt like I had found my place at Wes. I’ve had a lot of leadership roles, so I felt like I had a very stable foundation as a senior representative of the WSA. I feel like I finally found a place where my voice has been amplified. But more importantly, I have been able to uplift marginalized people’s voices within the community and people whose voices have historically been silenced. I did that [by]work[ing] [with] Ujamaa last year [on the] Ujamaa manifesto with the administration and the highest administrative stakeholders within the university, including all of the vice presidents of Academic Affairs, Student Affairs, Admissions, Financial Aid, the Provost.

AB: I’m a senior interviewer for the Office of Admissions. I really take pride in that work because I think admissions and Wesleyan’s website can say anything they want about the campus and community to paint it in the most positive light. But what’s really more important as a student body and what makes up the actual community is based on student efforts. Shaping the new generation of Wesleyan students coming in has been something very exciting to me.

A: Are you writing a thesis?

AB: I’m writing a thesis that’s cross-listed CSS [College of Social Studies] with the College of Education Studies. My thesis is debunking the idea that the American Dream is meant to act as an equitable access point for marginalized communities to disposition themselves from their social standing.  [Through] debunking that idea, [I am] also debunking the idea that if you’re in a marginalized position and you don’t access the American Dream, it’s not because you don’t have enough grit or motivation, but because the system was never created to be an equalizing factor, [that] system being the U.S education system.

A: What are you hoping to get out of your senior year?

AB: Last year, I missed a lot. I was remote all year. I’m really excited to reorient myself and reposition myself within the community physically. I think last year, I still was very involved. I did a lot of events through the Office of Student Involvement. But this year, I hope to leave a legacy, I want to be remembered. I think a lot of seniors say that but I think it’s easier within my positionality to leave marks through resolutions, changes, within the bylaws, and the effects I create with student organizations and affinity groups. I want to leave this place being better than when I started.

A: What’s one of your favorite classes or professors you’ve had at Wes? How did that class or professor shape you as a student and person?

AB: All of my favorite classes, in general, have been my Education Studies classes. My most influential professor would have to be my thesis advisor [Amy Grillo]. I took my first class with her my first year at Wesleyan and it was “Schools in Society.” I definitely recommend that class for everyone. We spend such a large portion of our lives within a classroom, within the education system, and not a lot of people pause and analyze how that creates people within society. We are trained to be people within a civil society through the classroom. Having a critical analysis of how that impacts us and our lives and the society around us is very important. Through my education practicum, I went into a public school in Meriden. My research question analyzed how the pandemic has affected the awareness and reaction to inequities within the “classroom”. I say “classroom” because we weren’t inside a classroom, it was through Google Meets. There were 30 second graders on little boxes on the screen, so you can imagine how that was. But for the first time, teachers within early education were seeing the inside of homes and seeing what some students had to deal with. Some students didn’t have a little workspace, they were working on their bed with their other siblings who were also in online school. Some students had families running all around them because there were so many kids around. Some students had a whole setup, a little classroom, and a chalkboard behind them. You can see the disparities within experiences. That was a very rewarding class to be able to help the teacher as a TA, but also interact with the students and help alleviate any stress or concerns that they had within their schooling during a pandemic.

A: I can’t imagine being in second grade and being on Zoom, right? Must be a wild experience.

AB: I feel like as a second grader, everyone wants attention, right? So imagine everyone wanting attention at the same time, they’re all screaming. Honestly, it hurts. There were so many times when I had my AirPods in and was like “Ah, I can’t hear anything!” But that’s just the energy they bring because it’s second grade. It was also really heartbreaking to see the different experiences and situations these kids found themselves in.

A: What piece of advice would you give your freshman self?

AB: It’s okay if you’re not involved in every single thing you want to be. I know that you’re a very passionate person and it shows by how you apply yourself. But sometimes you just need to take a breath, take a step back. And be very mindful about the things that you’re putting your all into, because you’re only one person, you can’t spread yourself out so thin because you’re going to fail if you do. So take it slow. Take it one step at a time. And everything will be okay.

A: What are some of your favorite Wesleyan memories?

AB: Before I came to Wes, at WesFest,  my favorite thing was the student of color fashion show, obviously, because it’s the best thing in the world. I remember looking at all these beautiful people walking down the runway and feeling so validated in my identity. They asked for prefrosh to come up on stage, and I remember me and another person my year, José,  went up and walked down the stage. It felt so amazing to be cheered on by the other Wes students and know that as an early decision applicant I made the right decision to come here. Another memory was my first year here. We were on Foss and me and my friend Natalie were studying for a Psych 105 test. I think it was the final so everyone was like, “Oh my God, we need to get this down.” It started with the two of us and then just people just started trickling in, because it’s a massive lecture class. At the end of it, there were a bunch of people in a circle studying and testing each other with note cards. That was such a sweet moment of solidarity. Everyone, it doesn’t matter if you’re friends with them, it doesn’t matter if you’ve ever talked to them before, we’re all struggling to study for this final and we’re gonna do it together.