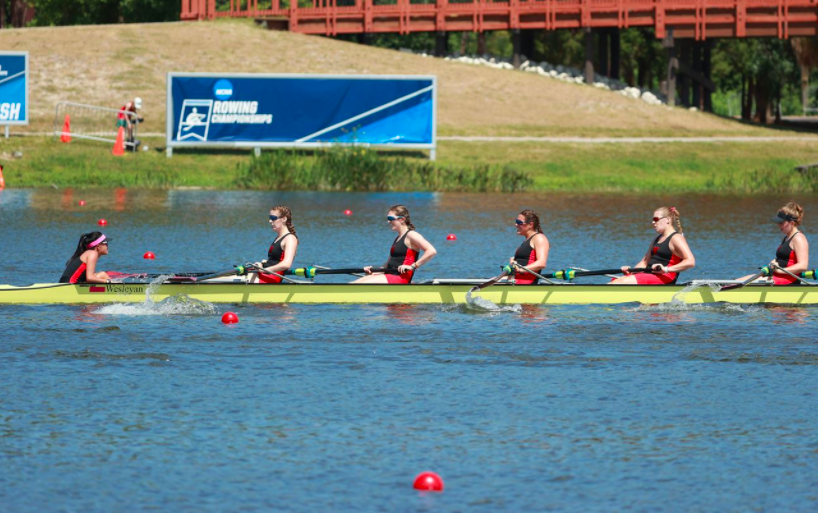 C0-Captain Emily Coombs ’22 said she was elated with this result and motivated for more future success.

“Our team was excited to finish fourth once again, especially being that we had to qualify for NCAAs through an at-large bid after just missing out on making it to NESCAC finals,” Coombs said. “Our points total was actually higher than the year before, meaning overall our boats placed better. The margins between boats were also tighter, which showed more relative speed for our team, so in a small sense it did feel like an improvement. That being said, our team is super ambitious, and definitely would have liked to at least squeezed into the top three. So, as exciting as it was to just be at NCAAs, I think that we all left feeling extremely fired up and motivated to win the whole thing next year.”

Coombs added that the key was having a lot of rowers who could perform at a high level, as the team had to navigate an ever-changing lineup of rowers.

“The depth of our team absolutely played a crucial role in making it to, and placing at, NCAAs,” Coombs said. “We had lots of lineup changes in the last few weeks before NCAAs, with rowers moving from the 2V boat into the 1V boat and even from the 3V to the 2V. We were lucky in that we had a strong group of women who all wanted to work hard for even the slightest possibility of being able to compete in an NCAA boat.”

Coombs emphasized that the team’s positive attitude contributed to their success in the water during what was a draining pandemic year.

“I would say the collective attitude and positivity of our team was also one of the key elements,” Coombs said. “Last year was obviously a long year, and we were not even sure that we were going to have any sort of season, never mind the chance to go to NCAAs. However, throughout the year we kept training and thinking we were going to have a proper spring season. This was definitely hard and draining at times, especially when there was no end goal in sight. Our team is very close-knit though, and everyone used one another as support and motivation to power the whole team through the fall and winter, and then the spring, NCAA training, and NCAAs itself.”

Heading into this season, Coombs stressed the importance of using that motivation to work hard and improve upon their fourth-place finish.

“We have a very young team, which ideally bodes well for this coming season,” Coombs said. “At NCAAs, the 2V (which placed third) included six freshmen, and the 1V had four sophomores and a freshman. Our goal is to use this youth and our motivated energy to our advantage as we build off of last year and work to get faster this year. As rewarding as it was to place fourth in the Nation, our team’s goal as a whole has and always will be to work in pursuit of a National Championship. I think that our team is more excited than ever to get back on the water and break our fourth place streak!”

The women’s crew fall schedule kicks off on Sunday, Oct. 3 with the Riverfront Regatta in Hartford.