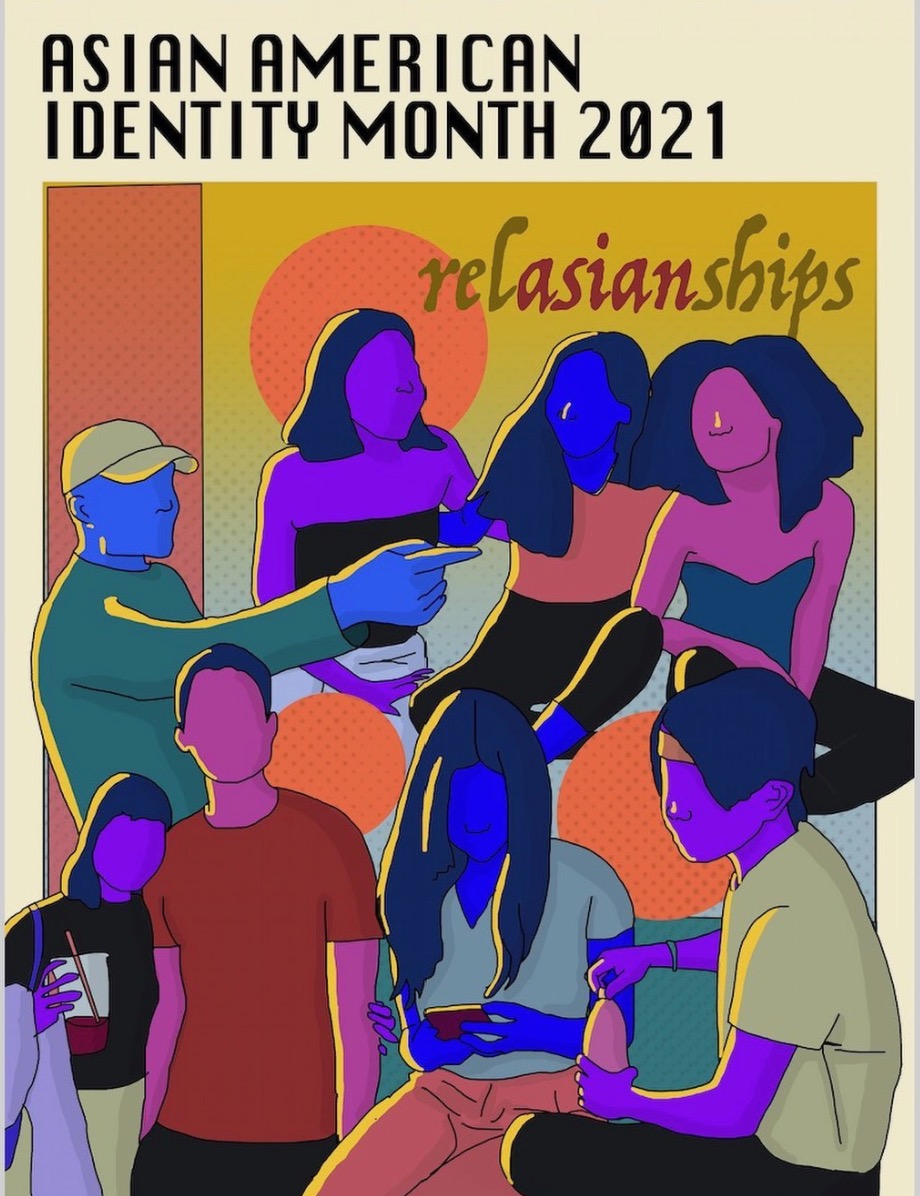 AASC Co-Chair Emily Moon ’21 explained that the theme of “relasianships” was intentionally kept broad to allow students to explore a wide range of topics related to Asian and Asian American identities.

Organizers hoped the month would provide a space for Asian and Asian American students to come together and build solidarity with each other and the broader student of color community at the University. In addition, organizers hoped Identity Month would encourage white students to learn more about the Asian American community, especially during a period in which anti-Asian sentiment and violence has escalated, both in the U.S. and globally.

“I wanted Asian American Identity Month at Wesleyan to provide a space for the students to rant, to cry, to speak, to learn, to show that they’re not alone and that there is a community that is here for you who are also feeling the same ways that you are feeling and who can be here to support and validate the things that you are feeling,” AASC Co-Chair Chaiyeon Lee ’22 said. “The other thing that I wanted was more non-Asian, non-POC—so white students—to care and to educate themselves about what’s been going on to the Asian American community.”

For AASC Secretary Emily Ren Jackson ’23, Identity Month gave Asian American students the opportunity to celebrate their identities and draw strength from one another amid the surge in anti-Asian rhetoric and violence. Although not organized as part of Identity Month, on Tuesday, Mar. 30, Emily Chen ’23, Kevin Le ’22, and Moon, along with other members of AASC, organized a vigil to commemorate the lives lost in the Tuesday, Mar. 16 Atlanta shootings, and to provide a safe space for Asian and Asian American students to heal and grieve.

“What has been really been great about Identity Month is that we were taking the time to celebrate our community again and turn around and reach a happier mood, a happier place where we can celebrate all that we are, instead of trying to fight for ourselves and prove our worth, but rather accept that or acknowledge the fact that we are worthy,” Ren Jackson said. “I think that Identity Month allowed us to—not get back to normal because a lot of it is still in our minds, it’s still very important…this isn’t a topic that should ever leave anyone’s minds—but it’s allowed us to bring back some normalcy into our lives and bring back a little bit of happiness that we have in this community.”

Identity Month formally began with Convocation on Saturday, Apr. 10. At the event, three students—Anna Yeo ’21, Brian Kim ’22, and Emily Chen ’23—and three faculty speakers—Associate Professor of American Studies Indira Karamcheti, Associate Professor of East Asian Studies Takeshi Watanabe, and Assistant Professor of English Hirsh Sawhney—explored the theme of “relasianships.” Each shared personal narratives and thoughts on their relationship to their identities, as well as other people and communities.

Ren Jackson appreciated the Convocation speakers’ willingness to be open and vulnerable in front of a group of their peers, colleagues, and friends.

“One thing that was really nice is that they definitely opened up,” Ren Jackson said. “There was a lot of vulnerability at the event and during their talks, which just resonated with me a lot. It was really nice how everyone was able to come to this space, feel safe, feel like they could share and then share. I thought everyone had really, really great things to say.”

One of the student speakers, Yeo, spoke about her sister’s formative role in helping her understand her racial identity while growing up in a predominantly white town.

“Anna…she gave her presentation about the most meaningful relationship in her life, in terms of forming her identity, and how that was her sister,” Moon said. “She talked about how they were growing up and they would always fight, and how they grew up in Andover, Massachusetts. For them, it was always just a very white town. Anna shared a bunch of pictures of her elementary school classes when she was growing up, and she’d be the only non-white face. It was really interesting to hear her talk about her racial formation and her formation of identity and how her sister was so instrumental in that discovery for her.”

“[Karamcheti] brought up some really cool points about how Asia itself…how she demarcates it and how [Asia is] separated into boundaries, but within boundaries or within countries it is so diverse at the same time,” Banka said.

Another Identity Month event organizers hosted was a discussion with Associate Professor of Ethnicity, Race, and Migration and American Studies at Yale University Daniel HoSang ’93 titled, “Beyond Exceptionalism: Asian American Solidarity in a World of Violence.” Moon asked HoSang to help facilitate discussions on how Asian Americans interact with Black Lives Matter protests and calls for institutional racial equity and justice.

“We really wanted to bring him in because a big question that we were grappling with this year was how Asians fit into the narrative of Black Lives Matter and trying to understand the ways in which we, as self-identifying people of color, fit into the broader people of color narrative,” Moon said.

In inviting HoSang, Moon also hoped that he would address anti-Asian rhetoric and violence in the United States, particularly in the context of the COVID-19 pandemic.

“Something we really struggled with, specifically in this year, was reflecting on the fact that there was a lot of anti-Asian rhetoric during the pandemic, and then that really accumulated over the past few months into actual acts of violence and hatred,” Moon added. “And that was something that we were grappling with, because that was something [that] obviously affected our community and changed the way that we saw ourselves and our safety.”

“We also held a little bit of a discussion afterwards to give the artists the chance to speak about what they thought about the themes, think about how they felt about their identity, maybe what their work means to them in terms of their relationship with their identity,” Ren Jackson said. “My goal of this performance was to close up the event in a fun, casual way that didn’t require any serious talks. I wanted to keep the mood light, but I also did want to connect it to the theme.”

Other events throughout identity month included a film series exploring the Asian diaspora, a ‘Taste of Asia’ giveaway competition (where students could submit pictures of Asian food they had cooked or eaten throughout the month for the chance to win a $50 gift voucher), and an alumni career panel and networking session over Zoom with Asian American alumni.

Despite the constraints of the pandemic, organizers found creative ways to use online outreach to promote and celebrate Identity Month. For example, Lee produced and shared a photo and interview series on the AASC Instagram throughout the month, where she asked participants about their relationship to their Asian identity.

“The beauty of it is that I pose the same question to every single person, but then the answers are just all so different, that’s just so cool to me,” Lee said. “Hearing these different stories, it’s really meaningful, and it puts a lot of things into perspective. Like I’m Asian American and I’m Korean American, and the different spaces that we take up and the different experiences that we have even as Asian-Americans on campus, there’s a lot of similarities and commonalities that we share, but then, at the same time, each individual experience is special and unique in its own way.”

To AASC Community Outreach Subcommittee Member Lilli Liu ’24, many of the events, particularly the social media campaign, turned out to be a great way to build a closer community for all Asian Americans on campus.

“I think that building relationships with other people within the Asian American community, gives each other a sense of familiarity,” Liu said. “The Asian American population at Wesleyan isn’t a lot, it’s very much a predominantly white institution, and so finding other people who can relate to me and who have had similar experiences to me is very comforting.”

Liu also asserted that this level of celebration was something that was lacking in her previous schools, highlighting the significance of organizing Identity Month.

“I never really celebrated it, or it never was a thing that I was aware of,” Liu said. “For high school we just said, ‘Oh, it’s Asian-American Identity Month,’ but nothing really came out of that, and so it was nice to see that at Wesleyan, Asian Americans were being celebrated.”

Now that Asian American Identity Month has concluded, organizers are beginning to think about the future. Next year, Banka said she hopes more first-years and sophomores will get involved in planning and organizing Identity Month.

“I definitely hope to see a lot of the underclassmen get more into Asian American Identity Month because…I think we need the young energy,” Banka said.

Banka also hopes that the energy and conversations that took place throughout Identity Month can continue, hopefully with more in-person community events.

“I really hope for us to have more…gatherings and community events, which I know was just not practical right now because of COVID, but next year I really hope that it happens and there’s more discourse,” she said.

“I’m hoping that there are more possibilities now that we know we have these resources online and now that we know that these alumni are so eager to come back and participate,” Ren Jackson said. “I hope we have a lot of participation across all areas, when it comes to guest speakers, guest performers, alumni, students, everyone.”

Liu hopes that, in the future, there will be more opportunities for AASC to work with other student groups to host events and facilitate conversations.

“I’m looking forward to more collaborations with other students of color organizations like Shakti,” she said. “I know that we’ve done events with them in the past, but I’m looking forward to more events, especially because there’s this whole stigma that South Asians aren’t considered Asian or Indian. Collaborating with [them] and ensuring that they also are being heard and they’re not being overlooked in a way.”

Liu also emphasized the importance of continuing the dialogue around Asian American identity now that April has ended.

“It was really important and nice to see that our identity is being celebrated, and I just hope that doesn’t stop and those conversations don’t stop within the next month,” Liu said. “It’s not something that you just put down and then pick up next year.”