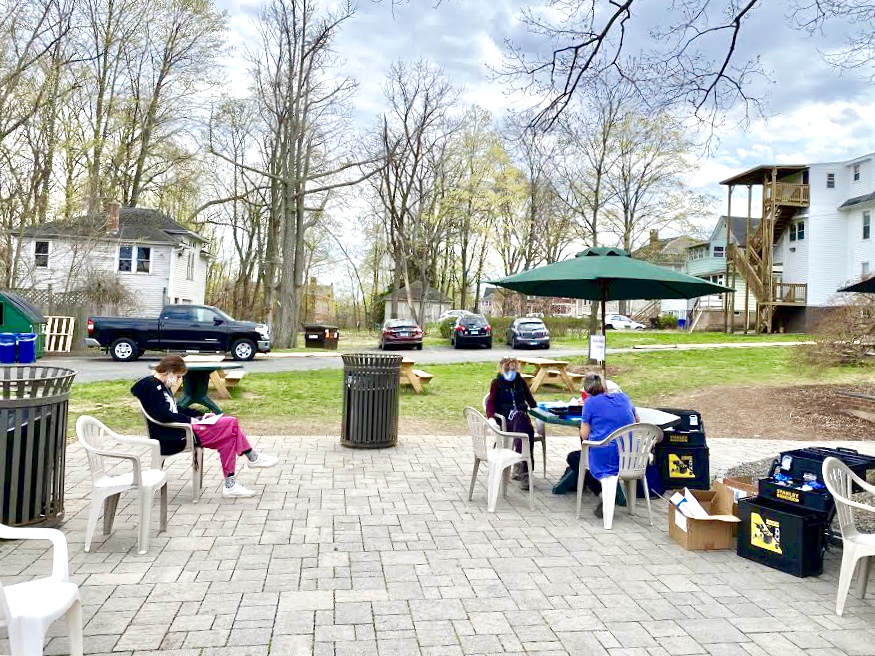 On a beautiful 70-degree day in mid-April, the WesWings patio was packed as usual, but it was not for the typical lunchtime rush. Rather than wings and fries, the green metal picnic tables sported syringes, alcohol prep pads, and disposable blue gloves. And instead of being happy because they were eating delicious food, the people in the patio were overjoyed for a different reason: At last, they were getting vaccinated.

Students, staff, and other community members rolled up their sleeves at WesWings to receive their first dose of the Moderna vaccine on Wednesday, April 14. In total, the clinic administered 66 vaccinations to students, WesWings and Red & Black staff, family members, and other Wesleyan staff members. This included several custodial staff members, to whom the University had not offered vaccinations. At the end of the day, 97% of the entire staff at WesWings and Red & Black had received their first dose of a COVID-19 vaccine.

The clinic was sponsored by the Middletown Health Department and the owners of WesWings Ed Thorndike ’89 and Karen Kaffen-Polascik.

“Karen and I have been very obsessive [with] trying to get everybody vaccinated as quickly as possible,” Thorndike said in an interview with The Argus. “Whatever it took.”

Before this clinic, Thorndike and Kaffen-Polascik had worked hard to get the vaccine as quickly as they could to their staff. Between driving staff members to vaccine appointments, alerting them to appointments in their areas, and looking for extra doses nearby, the pair have been eager to provide their staff with the extra level of security the vaccine can provide.

“We’re just obsessive about it because we’re the ones who get the call at 9:30 at night when someone’s a close contact or someone has tested positive,” Thorndike said.

Thorndike and Kaffen-Polascik’s efforts reflect a shared dedication around Middletown to vaccinate community members and improve vaccine accessibility. Middletown has been leading the charge on vaccinations in Connecticut.

“Middletown has really knocked this out of the park,” vaccine clinic volunteer and Dean of the College of Health and Human Services at Southern Connecticut State University Sandy Bulmer said in an interview with The Argus. “It [was] rated the highest in Connecticut for getting people vaccinated.”

The Middletown Health Department has organized several mobile clinics around the city since the Moderna vaccine was first approved in the United States.

“We’ve been doing these clinics since as soon as the Moderna was approved, which was December 30, and we haven’t stopped since,” Acting Director of Health for the Middletown Health Department Kevin Elak said. “So we [are] basically a traveling clinic. We come in with our equipment and we set up wherever.  We’ve done clinics at senior centers, gymnasiums, things like that. So we’ll go wherever there is the need.”

The vaccinators are members of the Middletown Medical Reserve Corps, a volunteer organization dedicated to providing medical support in public health emergencies. Most of them are retired medical professionals.

Bulmer, who has been volunteering at various clinics around the state, expressed her enthusiasm for the work she has been doing since the vaccine rollout began.

“It’s a lot of fun,” Bulmer said. “We did the seniors first and that was really rewarding. We [had] stories where somebody left their house for the first time in a month or a year. And they were crying and hugging everyone. People show up and recite poetry while they’re waiting.”

The energy at WesWings was similarly joyous. Although there was a list of people who had previously signed up to be vaccinated, which included mostly WesWings and Red & Black staff members and their friends and families, the clinic had several doses left over. The word spread around campus quickly, and around 3:30 p.m. there were several students rushing in on foot, bike, and car to receive the leftover vaccines that friends and acquaintances had alerted them about.

Gato Nsengamungu ’23 also managed to score an extra dose. He expressed excitement that his vaccine would allow him to safely travel home to Rwanda.

“[The vaccine] is like a second passport,” he said with a laugh.

As the doses dwindled, Thorndike and Kaffen-Polascik organized the growing line with a conductor’s ease that only comes from a restaurant owner operating during the pandemic.

“This is going to be just like, as we get down to how many salmon are left, there’s three specials,” Kaffen-Polascik said.

When doses ran out, people in line who had not received the vaccine were given pamphlets providing information about the nearest and most convenient vaccine locations.

The second WesWings vaccine clinic will be held on May 13 from 2 to 5 p.m. on the patio. Those who received the vaccine on April 14 should bring along their vaccination cards to secure their second dose.

When asked about plans for the future in the post-vaccine world, Thorndike and Kaffen-Polascik have a clear vision. They are anxiously awaiting the time in the not-so-distant future when they can take down the plexiglass barriers, take off their masks, and get back to business as usual.