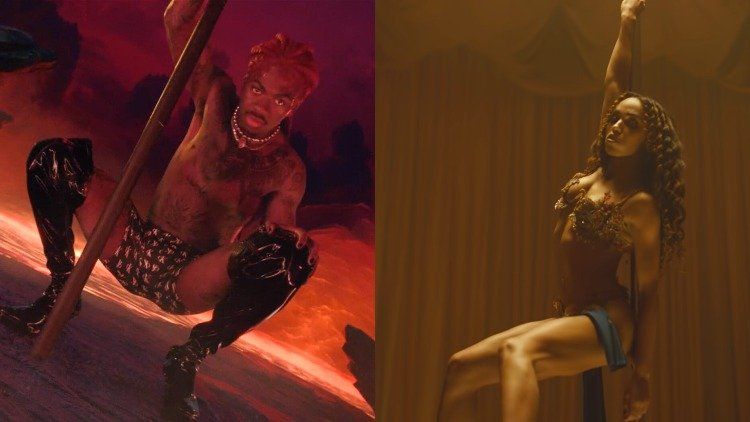 Last Friday, Lil Nas X dropped a groundbreaking music video for the March 6 release of his new song “MONTERO (Call Me By Your Name).” Accompanied by lush special effects, the video takes place in a fictional universe where everyone is unafraid to show the world their authentic selves. Over the course of the three-minute music video, Nas X seduces his clone, rides a stripper pole to Hell, and gives Satan a lap dance. Since Friday, the video has become a viral success, boasting close to 70 million views on YouTube.

However, not everyone is taken with Nas X’s new music video. Artist and director Andrew Thomas Huang took to social media to point out the glaring similarities between the music videos for “MONTERO” and FKA Twigs’ “cellophane,” which he directed. On his Instagram story, Huang explained that he was almost hired to direct “MONTERO,” before Nas X’s team pivoted away, instead hiring the choreographer of “cellophane.”

“[Although] sharing aesthetics and paying homage is part of the creative process…when an artist is in a position of power (amplified with the help of major record labels, social media, PR, etc) and repurposes someone’s labor and ideas to serve their brand image, they cause harm by displacing the efforts of the artists who did the original leg work,” Huang argued in a Twitter thread on Sunday.

The controversy over the visual similarities between the two videos begs the question: when does emulating the work of another artist cross the line? When does imitation evolve from the sincerest form of flattery to a severe violation of artistic license?

While the similarities between “MONTERO” and “cellophane” are undeniable, there are also clear cut differences between them. In both music videos, there’s a low-angle shot of the Heavens as an angel emerges towards the respective artist through a tunnel of clouds. Just as in “cellophane,” “MONTERO” features pole dancing to show the protagonist falling through space and fluttering toward the underworld. In “cellophane,” the vision of an underworld is more nebulous. At the end of the video, FKA Twigs plummets into an abyss and is slathered in red clay by two female creatures. The underworld depicted in “MONTERO,” on the other hand, is very clearly a classical Hell, with Nas X seducing and later killing Satan. Additionally, the pole dancing in both videos are very different in nature. As Nas X falls toward Hell, he rides and almost gyrates the pole, presenting himself as more explicitly sexual than FKA Twigs. Twigs’ pole dancing is far more graceful, her movements evocative of modern dance and ballet as she effortlessly displays her mastery of the art form.

In analyzing the two videos, it’s important to question to whom this shared imagery and central themes belongs. Surely FKA Twigs isn’t the first to prominently feature pole dancing (and by connotation sex work) in a music video, but the similarities between “cellophane” and “MONTERO” are impossible to ignore. In my mind, the existence of this controversy is the result of poor communication on the part of Lil Nas X and his management. Before even making the music video, Lil Nas X’s team should’ve reached out to both FKA Twigs and Huang and asked for their permission to move forward with the idea. Part of artistic license and integrity is the ability to define your creative vision and to prevent others from passing off your ideas as their own. If Lil Nas X had spoken to FKA Twigs ahead of time about his vision for “MONTERO,” perhaps this scandal could have been avoided.

Luckily, this story has a happy ending. Twigs wrote an Instagram post on this past Tuesday expressing her support for Lil Nas X.

“thank you @lilnasx for our gentle honest conversation and for acknowledging the inspiration cellophane gave you and your creative team for creating your iconic video!” said Twigs in the post. “i think what you have done is amazing and i fully support your expression and bravery in pushing culture forward for the queer community. legend status.”

Last Saturday, after a long and luxurious weekend day of lying around in the sun and pretending to read for class, my friend and I huddled over her laptop in her tiny, pink-hued LowRise room and embarked on one of our favorite activities: solving Twitter mysteries. For the uninitiated, Twitter mysteries are topics of heated discussion on Twitter that have progressed past the point of being intelligible to a casual Twitter user—take, for example, the recent Cinnamon Toast Crunch shrimp scandal, which required several rounds of Google searches for my friend and I to comprehend. This fateful Saturday night, our sleuthing eventually led us to Lil Nas X’s new music video “MONTERO (Call Me By Your Name).”

Equal parts completely scandalized and deeply obsessed, I knew that “MONTERO” was a piece of art worth watching from the tweets alone. What I did not know was that it would feature elements of science fiction, Nas X playing every character, and a scathing critique of homophobic oppression expressed through the symbolism, imagery, and rhetoric of the Catholic Church. The video, as you probably know by now, concludes with Nas X grinding on and snapping the neck of Satan, who is also, in a wild stroke of artistry, played by Nas X.

Though the 21-year-old artist is not new to challenging social conventions and gender norms (you might recall his fabulous pink cowboy ensemble from the 2020 Grammy Awards), this video represents the first time he has explicitly gone to bat with the ecclesiastical establishment, and the public took notice. While I viewed the “MONTERO” video with surprise that quickly gave way to delight and joy, much of Twitter did not share in my appreciation for Nas X’s sacrilegious commentary. The singer has fended off criticism from haters left and (mostly) right—notably, conservative author and activist Candace Owens, conservative gun-rights activist Kaitlin Bennett, and Kristi Noem, the Republican governor of South Dakota, who objected to Nas X’s social media marketing of his own line of Satan-themed Nike sneakers, which purportedly contain a drop of human blood.

Luckily for Nas X, his social media fluency has allowed him to sharply deflect criticism while enjoying the vast commercial success of the song and video. In an “apology video” posted to his Twitter, entitled “Lil Nas X Apologizes for Satan Shoe,” the singer holds up a prototype of his controversial Satan shoe and pretends to commence a classic YouTube apology, before cutting to a clip from “MONTERO” that features him giving Satan a lap dance.

In a more serious moment, Nas X tweeted out a personal anecdote explaining his subversive use of Christian imagery in the music video.

“i spent my entire teenage years hating myself because of the shit y’all preached would happen to me because i was gay,” he wrote. “so i hope u are mad, stay mad, feel the same anger you teach us to have towards ourselves.”

After all, amid the clapbacks to right-wing activists and rapidly memed screenshots of Lil Nas X sliding down a stripper pole into hell, “MONTERO” is, at its core, an ode to Nas X’s former, closeted self. Montero Lamar Hill is the singer’s given name.

In a letter to a younger version of himself posted to Instagram, Nas X tried to console him and his struggles with identity.

The letter goes on: “you see this is very scary for me, people will be angry, they will say i’m pushing an agenda. but the truth is, i am. the agenda to make people stay the fuck out of other people’s lives and stop dictating who they should be. sending you love from the future.”

While “MONTERO” is, on some levels, a publicity stunt to grab the attention of viewers and fire up conversation (based on the nearly 64 million views the video has racked up, all press is good press), it is clear that on the level of the art itself, the song and video constitute a sincere and emotional response to socially ingrained homophobia. It’s a response encoded into the song’s lyrics.

“Cocaine and drinking wit’ your friends / You live in the dark, boy, I cannot pretend,” Nas X sings in the pre-chorus to “MONTERO.”

Lil Nas X does not live in the dark; he cannot pretend, and with “MONTERO,” he makes it clear that has no interest in pretending.

As a queer person who has experienced violence from the Christian church both on the level of rhetoric and interpersonally, who has “lived in the dark” and who has also not pretended, “MONTERO” is a loud, powerful, lewd, artistic, and imaginative manifestation of queerness that I am heartened to see in the mainstream. I hope that Nas X will continue to push boundaries with his art, while also remaining vulnerable and rejecting the opinions of critics.