Too Close For Comfort: Experiences of COVID-19 Close Contacts 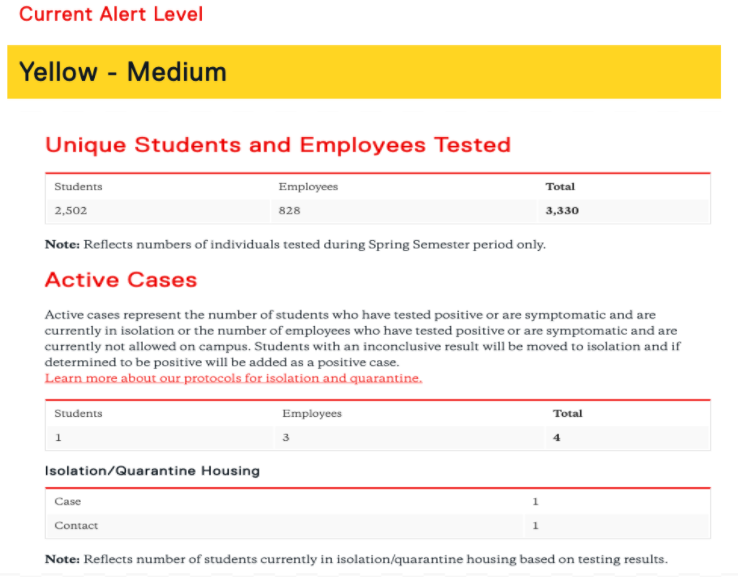 Every Wesleyan student has that fear: getting a call from an unknown number with a Middletown area code the day after your COVID-19 test. But what if it’s not you who has tested positive, but rather someone with whom you’ve been in close contact? What’s next?

In an email to The Argus, Medical Director of the Davidson Health Center Tom McLarney defined a close contact as an intimate partner, a person with whom the positive case lives, and a person who is less than six feet away from the positive case for more than 15 minutes in the 48 hours preceding the case’s symptoms or positive test.

McLarney also explained that the isolation location of close contacts varies depending on where the person lives.

“A student can quarantine or isolate in place if they live in a single room with its own bath,” McLarney said. “Otherwise they would need to go to the [Middletown] Inn. Those who live in a house: A case (+ COVID-19) will need to isolate at the Inn. Those remaining (close contacts) may either quarantine in place: the benefits are being with people you enjoy who support each other in quarantine. The risk is that if one person develops COVID-19, the others will [have] their quarantine extended since they are close contacts of a new case. So folks living in the same house can either quarantine in place or go to the Inn.”

If a student is quarantined in a woodframe house, Low Rise, or High Rise, they are allowed to stay in their residence. Otherwise, they will be transported to the Middletown Inn.

While the Health Insurance Portability and Accountability Act (HIPAA) typically prevents the personal health information of students from being released to the community, it has been temporarily amended due to the nature of the COVID-19 pandemic, and the necessity to quarantine.

“When we speak to the case to inform [students] of their positive test, we ask them if they have any close contacts,” Dr. McLarney wrote. “Roommates…are a given. Students have been very compliant with the process and will sometimes call back if they remember someone that [was less than six feet away for fifteen minutes or more]. Again, it is a much easier process than our contact tracing colleagues have in the community.”

Because close contacts are unaware of whether or not they have contracted the virus, the experience can be frightening for students. Quarantining, most likely alone, and waiting for possible symptoms to arise is stressful by itself, but some students have also reported extra confusion and miscommunication.

A pair of close contacts in High Rise, who spoke to The Argus on the condition of anonymity, emphasized that they were the ones who turned themselves in to be quarantined.

“We weren’t called, we called them,” one of the girls explained. “They didn’t call us as a close contact. We were like, we don’t want to go into [WesWings] or something and affect people. We called them, and they had to verify with the person, and then they put us in the system as quarantined.”

Once in isolation, the pair faced additional challenges. According to University practices, close contacts in isolation do not get tested for COVID-19 until the end of their quarantine period, regardless of whether they become symptomatic. While this is because a negative test will not shorten isolation, these students emphasized that not knowing whether or not they were COVID-19 positive took a mental toll.

“It’s really hard for us to not know if we have [COVID-19] for a week, and we’ve been not taking Tylenol, literally just to see if we get symptoms so we can report it to them,” one of them described. “We kept asking, being like, ‘why can’t you test us? We don’t really understand. We feel sick, and you’re not putting our number on the dashboard, even though we’re sick.’”

Despite the girls’ requests to get tested, they were isolated in their apartment and reported agonizing over potential symptoms. Still, their complaints went beyond their personal experiences.

“You’re not telling me if I have the disease that killed my grandfather,” one of the girls went on to say. “Like, of course it’s going to take a toll, but that’s not why I’m angry.”

Due to the delay in testing, the two speculated whether the University was trying to obscure the number of positive cases on the COVID-19 dashboard. At the time of the interview, the two girls had yet to be tested. While they have since been tested and gotten negative results, they told The Argus that non-Wesleyan doctors have told them that based on their symptoms, they likely contracted COVID-19.

“I’m less upset with the fact that I got [COVID-19] and more upset with the fact that people don’t know that I have it, you know, not me personally, but like as a number [on the dashboard],” the other girl added. “It seems very politically motivated…the person that was our contact is in for 10 days, and we’re not tested until like the eighth or ninth day, so that when our positives come back, our contact’s positive won’t [be] on the dashboard anymore, even though we’ve all had COVID[-19] at the same time, just to keep the numbers way artificially lower.”

McLarney disputed the logic of this accusation and denied any purposeful obfuscation of the numbers.

“The argument that we do not [test close contacts immediately] to keep our numbers down just does not make sense,” McLarney wrote. “Remember that the PCR will detect the SARS CoV-2 virus genetic material for up to 90 days after infection. Since we test those in quarantine before departure, we will detect it and then count that person as a case. Our numbers are therefore very accurate.”

Sarah Backer ’22 also didn’t buy into the dashboard allegation. However, she did have concerns about the University’s approach to testing close contacts. Backer is the House Manager of Earth House, whose residents recently had to quarantine for ten days due to one resident testing positive, and was frustrated that there was little certainty on whether or not residents had contracted the virus.

“We definitely were very frustrated because there was a lot of anxiety about a lot of people having COVID[-19] and not knowing because we couldn’t get tested,” she explained. “Also, if it turns out we [did] have COVID[-19], from the day we…tested [positive,] we [would] have to spend another ten days in this house. We were already kind of going crazy. That definitely negatively affected our mental health.”

Backer also expressed frustration that the house had been treated like a dorm in regards to social distancing policies, but quarantined according to the policy for senior houses.

“At the beginning of the semester, we were told to adhere to super strict social distancing and to pretend like Earth House was a dorm,” Backer explained. “Whereas normally we’d be more like a senior house and would all hang out together. The senior houses, their whole situation is that they’re allowed to not wear masks around each other, but they’re still supposed to be two people in a room. But we’ve been treated like we are a dorm, [with the University] basically saying ‘common spaces have to be super strict and no people allowed in each other’s rooms.’”

Yet, when the whole house went under quarantine, it felt like they were being treated like a different type of residence.

“I was told erroneously that the reason we were going under quarantine in place was because we shared a bathroom,” Backer said. “People in dorms share a bathroom. The policy that they had where they treated us like a dorm but quarantined us like a senior house was something I was very, very upset about.”

Those who lived in senior houses expressed having a much better experience than all those interviewed in High Rise or dorms, citing little to no concerns with the process.

“My housemates and I were lucky enough to have been tested the day we got the call from the Health Center (and we were fortunate to have tested negative), so personally I wasn’t too anxious about not having been tested during the quarantine period,” Rama Co ’21, who was a close contact of someone who tested positive, wrote in an email to The Argus. “We were tested after having been in quarantine for a week. Again, it didn’t really bother me at the time, given that we had all just tested negative. I do think that having people tested earlier might be beneficial, especially seniors who quarantine with members of their family unit.”

Others also had a positive experience while being isolated. Joe Schaefer ’24 was quarantined in the Middletown Inn after his roommate tested positive during the quarantine period this semester. Despite his frustrations with the quarantine length, he found the rules to be logical.

“I felt like I should have gotten tested after the first three days, and if I didn’t have it, I should have been able to leave,” Schaefer said. “But I was fine with it, given the circumstances.”

Some students also felt as though the contact tracing could have been stricter. One student, a Resident Advisor (RA) who wishes to remain anonymous, was contact traced after eating dinner outside with a friend who later tested positive. The RA said that she had told the contact tracer (the person who would later be contact traced to the RA) that the two of them had eaten closer than six feet, and that she possibly should be quarantined. In response, the contact tracer told her to lay low and quarantine in place in her residence. However, because the RA was still sharing a bathroom with their residents and leaving her room to get meals, this advice seemed risky.

“If a ton of people were in the bathroom at a time, I wouldn’t go,” the RA explained. “I tried to only use the single-person bathroom whenever I had to take my mask off to brush my teeth because I was scared. I knew other people were going to be around. With food, I had to go out and get food every day so I would try and go [get dinner] when it was not going to be super busy and avoid people as much as I could.”

Ultimately, this RA tested positive and is currently in the Middletown Inn. However, she didn’t feel as though the University was actively trying to hide her case.

“I don’t know why she [the contact tracer] was being so lenient with it, but I don’t think it was trying to avoid another person [on the dashboard],” she remarked.

Olivia Luppino can be reached at oluppino@wesleyan.edu