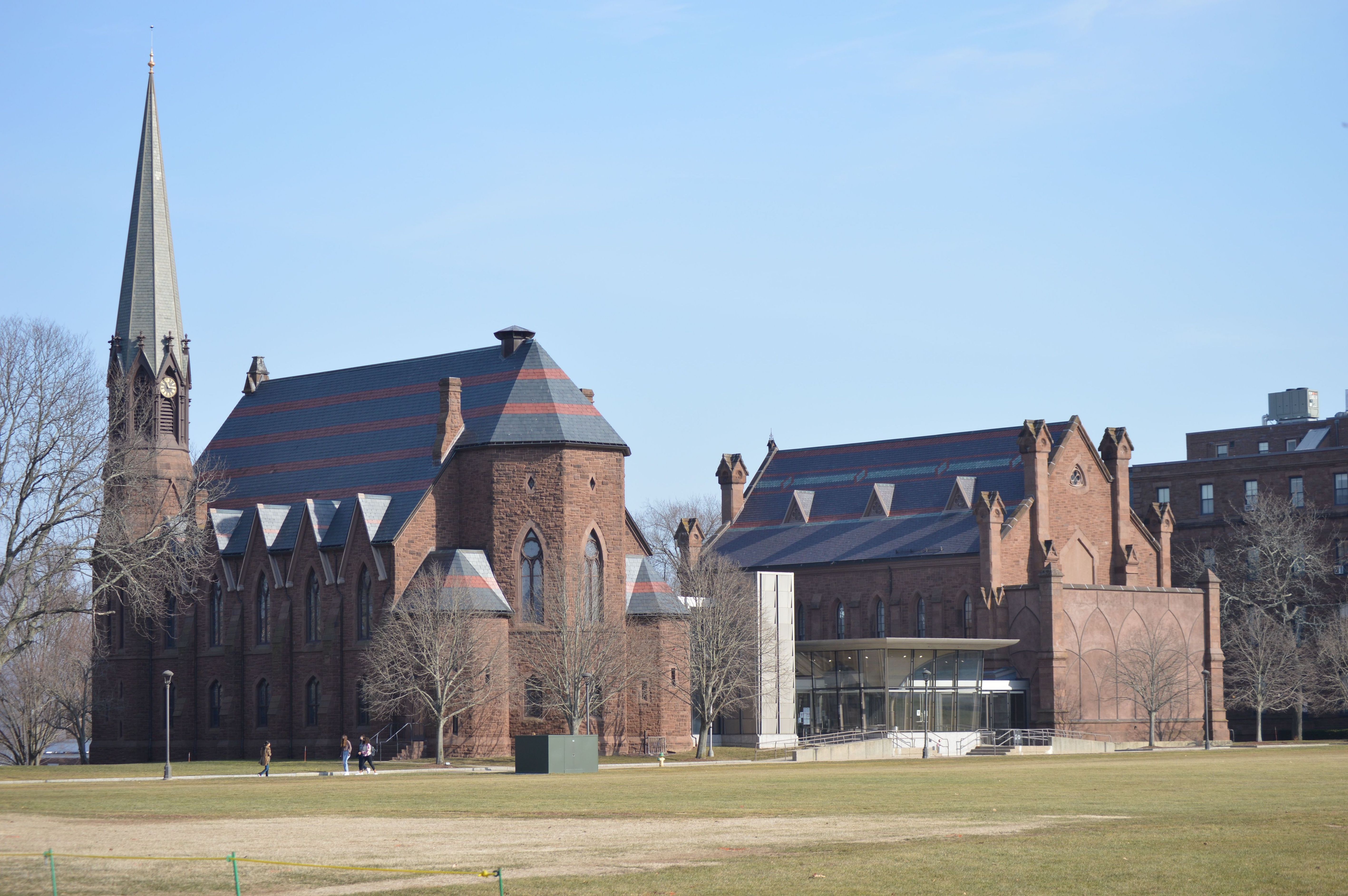 Since the onset of COVID-19, many colleges and universities have closed their doors to visitors. Current high school students have rarely been able to visit schools that they are interested in applying to. This challenge has made the work of Wesleyan’s Office of Admissions even more urgent, forcing them to come up with creative ways to attract prospective students and invite them into the world of the University, despite the lack of physical access to the campus.

Admissions has been adapting to the pandemic by developing virtual programs for interested students. Their programming emphasizes personal connections, which are rare in a college selection process that now takes place online. Students interested in the University can attend information sessions on Zoom, each of which are run by a current student and a dean of admissions, as well as live virtual tours of campus with student guides.

One of the most popular programs high school students can sign up for is WesChats, which are casual informational interviews with student workers in the Office of Admissions.

Associate Dean of Admission Chris Lanser explained the decision to implement this option by contrasting WesChats with traditional evaluative interviews.

“Since we were unable to connect on campus and offer interviews using our Senior Interviewer [SI] team, [which is] usually a cohort of about seven SIs who live on campus and work full time mid-June through Arrival Day, I decided to institute WesChats and utilize our full complement of 20 SIs to engage in video chats, answering questions, and sharing their stories,” Lanser wrote in an email to The Argus.

When the senior interviewers started to hold virtual evaluative interviews on Oct. 1, student front-desk admissions workers became part of the team offering WesChats. Student tour guide Ori Cantwell ’22, who has been conducting WesChat interviews since the fall of 2020, emphasized that they are mainly for the benefit of interested students and are not evaluative. Cantwell described WesChats as being less intense than traditional interviews: prospective students can have a casual, low-pressure conversation with a student worker.

“It’s not like an actual real interview with a senior interviewer, where they’re getting assessed, [where] it’s really about who they are and what they’re going to contribute to Wes, and how they would fit at Wes,” Cantwell said. “It’s not at all like that. They’re really just asking questions to the student worker…they come prepared with a lot of questions.”

Zoey Goldberg ’22, another student worker in the Office of Admissions, agreed with Cantwell’s description, adding that she appreciates the casual and conversational tone of the WesChats.

“It’s such an informal and friendly way to speak to the incoming students,” Goldberg said. “I’ve found that a lot of them seem really relaxed.”

Unlike official interviews, WesChats are offered to high school students of all grades and are not reserved for high school seniors. WesChats also happen year-round, whereas there is a cutoff date for normal interviews based on the application deadlines.

Lanser described WesChats as a success and highlighted the convenience they provide for prospective students, whom he said have reacted enthusiastically to the new program.

“We scheduled WesChats in the evenings and on weekends to maximize the potential to connect,” Lanser wrote. “The response was fantastic, with over 95% of available time slots filled and an incredibly positive response on the quality of the interactions from both students and SI’s.”

The student admissions workers agreed: they enjoyed the opportunity to form individual connections with interested high schoolers through the WesChats. Cantwell, who studies data science, mentioned his experience talking to a prospective student who was interested in computer science.

“I had a really, really good talk with him,” Cantwell said. “He had done all these amazing comp sci projects in high school, and he asked me what my favorite data science project was [that] I worked on and why I liked it so much. To see another student who was really interested in getting to college and having all the resources that are available at Wes, to be able to do your own projects and have professor support, that was really great to see, because it was something that I was looking forward to when I was in high school.”

Goldberg mentioned how conducting WesChats enabled her to follow up with students and give them information tailored to their interests, even after the conversation had ended.

“I’ve actually sent some emails to the students for questions that I either couldn’t fully answer [during the conversation], or just sent them links to things that I thought they would be interested in,” Goldberg said.

Although the admissions team said they have been determined and successful in their efforts to adapt to the pandemic, Cantwell acknowledged that some things just aren’t the same, and won’t be until things return to normal, when social distancing guidelines are no longer necessary. He cited the in-person tour as a crucial element of the admissions process that prospective students are now missing out on.

“The main element of the tour that is so important is being able to walk through campus while imagining yourself there and seeing students walking around and going between classes,” Cantwell said. “And I also think something that students and their families benefit from a lot when they visit campus is unguided time walking around campus without a student worker or someone on staff talking them through stuff. Just sort of walking and navigating, and they’re totally missing that now.”

Cantwell added that he misses the experience of working in the Admissions office pre-pandemic.

“It is a lot less fun now, I’ll be honest,” Cantwell said. “Going [on campus] and seeing everyone is such a huge part of the experience. It’s really fun to be there in the spring, when admitted students start to come, and a lot of them see the campus for the first time, or bring a parent who hasn’t seen the campus before. Seeing their joy to be at Wes is really exciting, so I really miss that. And I also just miss the social interaction of being at work, which I think a lot of people are missing right now.”

Despite its drawbacks, the virtual application process has also created more opportunities for prospective students to connect with the University, especially for those who might otherwise be unable to travel to campus.

“The most important takeaway from WesChats and our other virtual efforts is our ability to meet students where they are, to reach a much larger number of students who do not have the ability to visit campus, especially FGLI and other under-represented students,” Lanser wrote. “This is an initiative that improves access and equity in the admission process.”

Lanser added that WesChats are here to stay. The Admissions team plans to retain WesChats in its programming for prospective students, even when health conditions improve.

“As we look ahead to the next admission cycle, it is clear that our Senior Interviewer program will be a hybrid model that perpetuates the incredible reach we’ve had this year, continuing to have meaningful interactions with students we otherwise wouldn’t while offering in-person opportunities to those students who do visit campus, including those who come through our robust, Travel Assistance Program for low-income students,” Lanser wrote.

Cantwell also spoke highly of the way the University has made the most of current conditions. According to him, many of Wesleyan’s strategies exceed those of other schools. The live tour that Wesleyan offers online, for example, is a feature that not many other schools have adopted.

“We do a live tour [online],” Cantwell said. “I guess the fact that we even have a tour at all, or still are doing live tours, is a big deal, apparently. I’ve had students come to tours, and they’re just like, ‘Oh, no, we haven’t seen this at any other school.’”

Overall, the student workers spoke positively about the direction Wesleyan Admissions has gone during the pandemic, and the WesChat program has been a major part of that success.

“It’s been a really nice way to connect with high school students and possible incoming students about why I love Wesleyan and why they should apply here,” Goldberg said.

“I’ve been really pleasantly surprised by—and this is definitely my pride in the Wes admissions office—how well we’ve adapted to the pandemic, and how many resources we provide to students,” Cantwell said.

Anne Kiely can be reached at afkiely@wesleyan.edu.