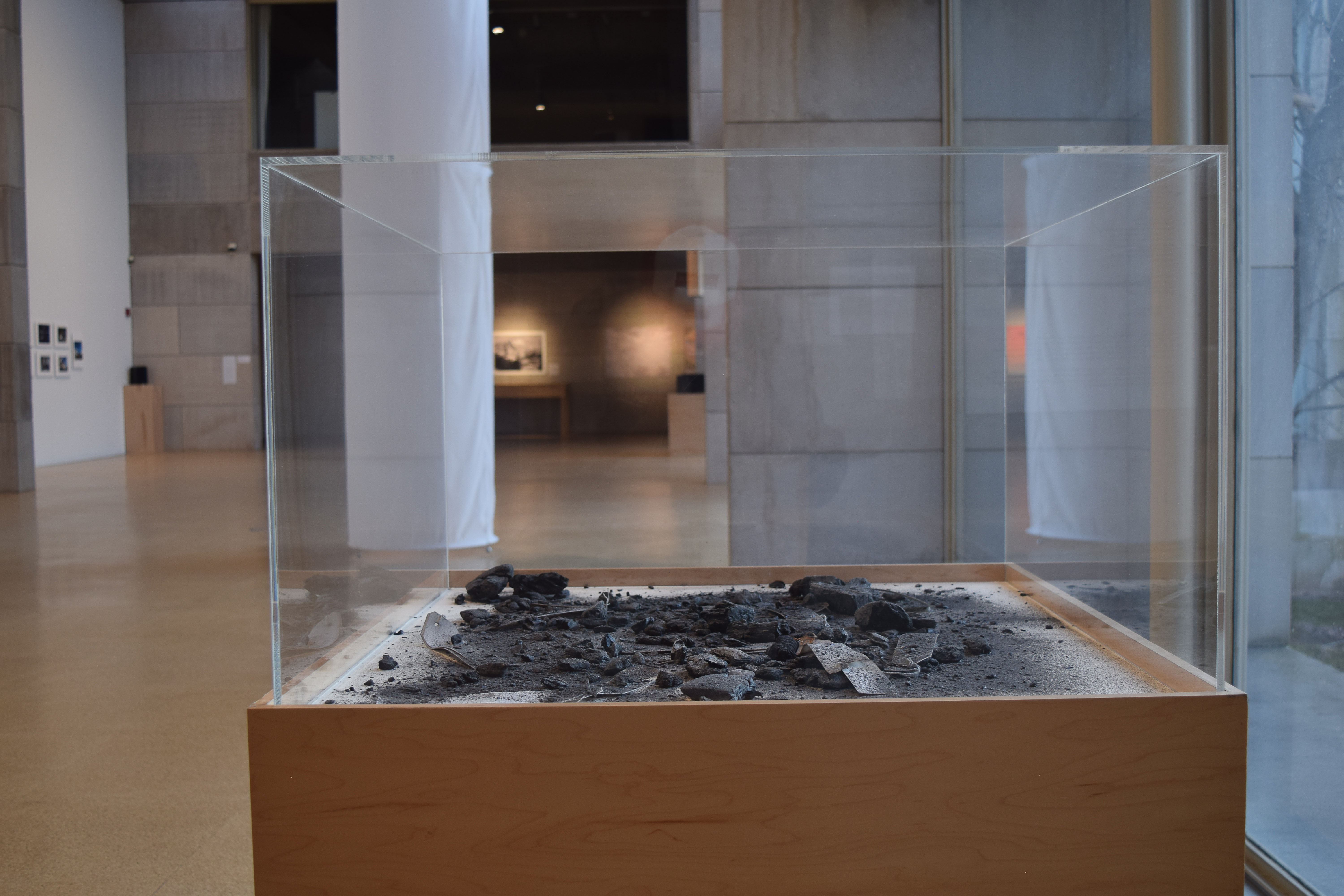 Currently on display at the Ezra and Cecile Zilkha Gallery, “Flames of My Homeland: The Cultural Revolution and Modern Tibet” forms a powerful union between historical documentation and contemporary reflection.

The show was co-curated by artist Ian Boyden ’95, William Frucht, the Executive Editor for Political Science and Law at Yale University Press, and Andrew Quintman, an Associate Professor in the Department of Religion and the College of East Asian Studies. It features the works of Boyden, Tsering Woeser, and her father Tsering Dorje.

Tsering Dorje, born to Tibetan and Han Chinese parents in 1937, joined the People’s Liberation Army (PLA) at just 13 years old. Capturing the Cultural Revolution of 1966 in Tibet through the lens of his camera, his photographs are some of the only known documentation of the Revolution, shedding light on the political violence that the Chinese government has deliberately tried to erase.

Dorje’s passion for photography shines through his black-and-white photographs that hang on the Zilkha walls. As a soldier in the PLA, he had a close perspective on the atrocities and chaos around him. His photos encapsulate the brutal public demonstrations that were held against those thought to be upholding the old aristocratic class. Police publicly shamed, beat, and often killed a wide range of people including prominent religious leaders, teachers, and aristocrats. All of this was an effort to enforce Mao’s reign in Tibet.

Dorje’s daughter, Tsering Woeser, is a renowned essayist, poet, and photographer from Lhasa, currently living in Beijing. In 2013, Woeser travelled to Lhasa, where she retraced her father’s footsteps. She photographed the Yabzhi Taktser, the former residence of the 14th Dalai Lama’s family, which at the time was in a dilapidated state. The viewer encounters the series of 11 photographs before approaching Dorje’s pieces. Pairing these two collections from different decades next to each other allows the works to exist in conversation, joining together to tell a larger story of religious and political suppression.

Boyden and Woeser connected via Twitter in 2015 and have since formed a close, collaborative friendship. As the translator of Woeser’s poems, Boyden holds a deep understanding of her collaborator’s work. While the exhibit features some of Boyden’s independent pieces, it also showcases projects co-created by Boyden and Woeser.

One such piece is their debut film “The Birds Might Not Come.” The film is a tribute to the 165 self-immolators, Tibetan citizens who lit themselves on fire by means of political resistance. Each self-immolator’s name was printed in calligraphy and hung on the branches of a dead plum tree, standing in for leaves. The sound of Woeser’s voice reading each name can be heard over the crackle of flames leaping up the trunk and engulfing the name tags. The use of both drone footage and close-up shots create a haunting visual.

Some of the remains of the fire are on display in the gallery. The charred pieces of paper are preserved in a glass box and sit on top of a layer of powdery ash.

“Fire is a great eraser. But it doesn’t erase everything. And what remains often holds a peculiar power,” Boyden describes on the Virtual Exhibition page, speaking to the spiritual significance of the dead’s relics in Tibetan culture.

In addition to watching the film, the viewer experiences a physical representation of the tree through the show’s titular piece “Flames of My Homeland.” In the process of making the film, Boyden actually created two sets of the 165 names of Tibetan self-immolators. While the first set was burned in the fire, the second set is delicately hung from the ceiling of the gallery, forming the shape of a tree. The viewer can watch the names peacefully twirl in the breeze as the sound of Woeser’s voice reciting her poem “Flames of My Homeland” echoes through a speaker. The use of these two mediums of expression—visual art and poetry—beautifully pay tribute to the 165 Tibetans.

Much like fire, the narrative of history has a tendency to demolish. Often, what is remembered—what is left unscathed by flames—is the story of the conquerors and not the conquered. In this sense, the exhibition is an active resistance to the persistent tide of historical and cultural erasure. Dorje’s photographs combat this pattern of obliteration by providing a rare documentation of a past intended to be scrubbed clean by history’s blaze. Woeser uses her contemporary artistic voice to highlight the historical significance of her father’s work while also speaking to the challenges and tensions facing present day Tibetans.

“Flames of My Homeland” is an intersection of religious thought, architecture, history, political violence, and contemporary Tibetan identity.

“All of this is important and it’s so much larger than just thinking about religion, politics, geography or art,” Professor Quintman said to the Argus. “In a certain sense, all of those things should touch everybody on campus. Everyone has something at stake in learning about the themes of this show.”

“Flames of My Homeland: The Cultural Revolution and Modern Tibet” will be in the Zilkha Gallery and online until April 1. Information regarding the exhibition’s accompanying events can be found on the virtual exhibition page.

Olivia Sharenow can be reached at osharenow@wesleyan.edu