Outdoor Hockey With a View: NHL Plays at Lake Tahoe 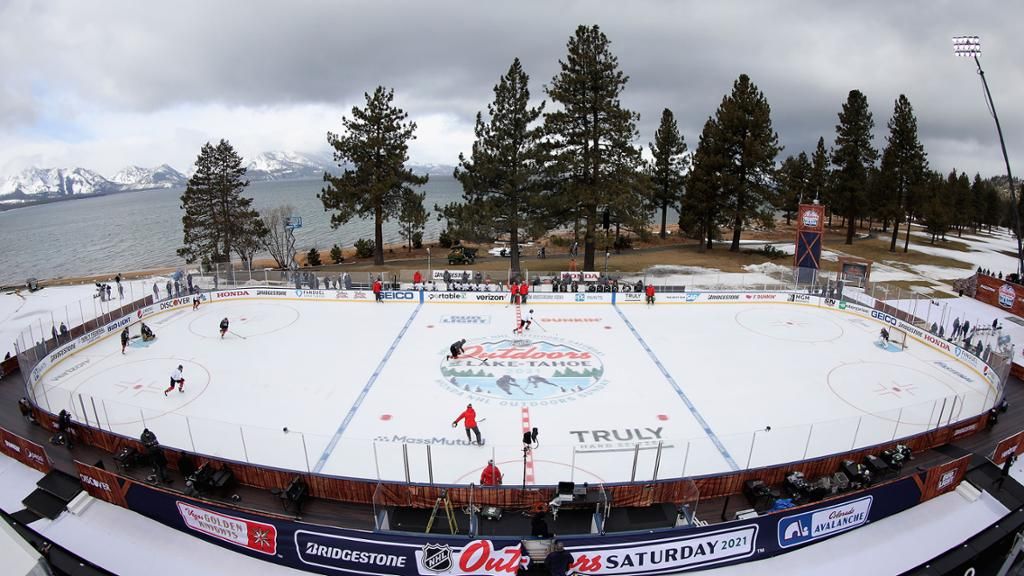 Each year, the National Hockey League (NHL) usually plays multiple outdoor games in front of thousands of fans at big sports stadiums, including the annual Winter Classic on New Years Day. This season, the NHL continued this tradition, but with a twist: no fans (for the most part) were allowed to attend games because of COVID-19 restrictions. Instead of playing outside at a big stadium, the league decided to play the outdoor games in a more natural setting, selecting the picturesque Lake Tahoe for two contests.

The games featured the Colorado Avalanche taking on the Vegas Golden Knights and the Boston Bruins playing the Philadelphia Flyers on the weekend of Feb. 20–21. The games were not actually played on the lake (much to the dismay of Avs forward Pierre Edouard-Bellemare), but rather on a rink constructed on the 18th fairway of the golf course at the Edgewood Tahoe Resort situated alongside it. This unique setting for a game made for a great TV viewing experience as the teams played with spectacular views of the Sierra Mountains, trees, and the lake in the background of every camera shot. Also, even though no fans were allowed in stands, people pulled up to the rink in boats and kayaks to try to get a glimpse of the action from the lake, which made for a spectacular viewing experience.

The games themselves were likewise entertaining and fun to watch, especially the first one between the Knights and Avalanche, in which the Avalanche won 3–2. In the game, the Avalanche jumped out to a fast start as they took a 1–0 lead in the first period, with defenseman Samuel Girard scoring just three minutes into the match. After the first period, the game was delayed almost eight hours because the sun was melting the ice, making it unsafe to play on as players were slipping all over the place and getting stuck in ruts during the action.

Once the game resumed, Vegas responded and tied the game up at one apiece in the second period as defenseman Alec Martinez scored. However, the game did not remain tied for long, as the Avalanche retook the lead shortly after on a goal from star player Nathan MacKinnon. Colorado then added a third goal in the final period from defenseman Devon Toews to take a two-goal lead in the game. Vegas was able to get it back to a one-goal game on a goal from Alex Tuch with six minutes left in the game but could not find a way to tie it up after that as the Avs hung on to win. In goal for the Avalanche, Phillipp Grubauer got the win as he made 27 saves on 29 shots.

Similar to the first contest, the second game, the next day, between the Flyers and the Bruins, also had to be moved (this time before the game started) because of worries about the sun melting the ice. It was supposed to be played in the late morning out west but was moved to the afternoon. The game itself was not as close on the scoreboard, however, as the Bruins won by a score of 7–3, dominating the Flyers with a four-goal second period after the game was tied at 2 after the first. The Flyers were missing many key players due to them being following COVID-19 protocols, so this scoreline was not that surprising to see. For Boston, star forward David Pastrnak had a hat trick, his second vs. the Flyers this season, and four other Bruins added goals of their own in the blowout. In goal, Bruins goalie Tuukka Rask only had to make 16 saves on 19 shots in the victory as the Bruins outshot the Flyers 35–19.

As a whole, despite the issues with ice, and having to pause the first game due to these issues, I would say the NHL Outdoors Weekend at Tahoe was a successful experiment, with a great setting and backdrop. Even watching from home, the view of the mountains, trees, and the lake was a welcome change from the usual sights of a big football or baseball stadium. Going forward, it will be interesting to see where else the NHL tries to play outdoor games in the future and if they start putting more outdoor games in unconventional locations.