Shades’ Production of “Salvation” Stages an Existential Fugue in the Afterlife 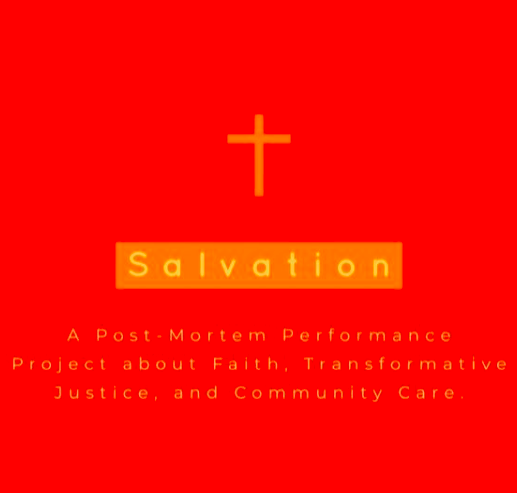 When your bones ache with endless pain, when you feel condemned to a life of suffering you don’t deserve, when you’ve begged for deliverance but hear nothing back, the only thing left to do is pray. That’s exactly what happens midway through “Salvation,” a new play conceived and directed by Luna Mac-Williams ’22, and produced by the Shades Theater Collective in the Patricelli ’92 Theater from Oct. 28 to 31. The show was made available online on Dec. 18.

In the show, Annie, a Black Haitian woman portrayed by Shanna Henry Phillips ’22, stands in a black void while eight other people watch her own reckoning with God in the afterlife. Staring at the sky, she pleads to a higher power to explain the pain life has brought her, despite her unwavering devotion to the Bible.

“Still I cannot wrap my head around—mwen se isit la—why I am here,” Annie states, her voice slowly betraying her frustration. “Why I, of all people, have gone to purgatory…. I’ve been put here in this halfway house between life and death. With only my memories and these Godforsaken people to keep me company?! Why?”

Annie’s wrestling with God’s absence recalls ancient grievances. These date back to the Book of Job, in which Satan questions the piety of a wealthy man named Job, leading God to test Job’s capacity for true devotion. God allows Satan to take away Job’s wealth, children, servants, and animals, and even to afflict him with physical pain. Pushed to the breaking point, Job desperately asks, for the first time, why God has abandoned him.

“And now my life ebbs away; days of suffering grip me,” Job recounts in an oft-quoted passage. “[God] throws me in the mud, and I am reduced to dust and ashes.”

However, the language choices of Annie in “Salvation” reveal the painful conditions of her life more than the allegorical figure of Job ever could. Her use of both Haitian Creole and English intimates a trans-national identity, with religious beliefs shaped by both Western Christianity and Caribbean Santería in a confusing swirl of colonialism. And Annie’s metaphor of purgatory as a halfway house, a term used for temporary homes provided for people recovering from substance abuse or transitioning out of incarceration, alludes to the racial and socioeconomic oppression that make living a “righteous” life unattainable for so many.

This blend of allegory and cultural specificity pulses through “Salvation,” allowing the audience to see how the suffering of BIPOC Americans is contested and accepted within their own communities. Watching the show means witnessing a strained stasis, seeing people wrestle with their demons and Gods only to find themselves back where they started.

“Salvation” begins with screaming, as nine characters gain consciousness from the moment of their death. After coming down from a moment of pure shock, the ensemble begins to settle down into their new situation and introduce themselves. CC (Leslie Rosario-Olivo ’22) emerges as a leader, frustrated that their life was cut short, daring God to smite them. Others are less explicitly furious, instead taking scope of the recent losses: Richie (Alisha Simmons ’24) reminisces about the fun things they’ll miss back on earth, and Abigail (Dachelle Washington ’22) realizes that she’ll never see her parents again. Others go beyond nostalgia into zany nihilism: Will (Marcos Pinto-Leite ’22) breezes by with a stoner’s calm, mostly upset that there’s no weed in heaven, and Tamara (Salma Hassan ’22) seems completely unbothered, just wanting to play games and find out who else in the group is gay.

That’s not to say that the group isn’t still concerned about the disturbing scenario in which they find themselves. Annie is disgusted that she would be placed in the same place as these explicit sinners, who she sees as beneath her. Natalie (Mahey Gheis ’22) reveals that she lived her life as a nurse, but shrugs off claims of heroism, stating that she was only doing her job when confronting death every day. Meanwhile, Jay (Milton Espinoza Jr. ’22) displays prideful machismo that slowly reveals his need for power in a world that has denied that to him, mirroring Maria (Angela Loyola ’21), whose immigrant parents’ belief in meritocracy has molded her into a “GirlBoss” with an obsessive need for control.

The play unfolds in one unbroken scene, with different characters’ personalities clashing and complementing one another, each argument and game and prayer cutting into one another. Similar to playwrights Quiara Alegria Hudes and Will Arbery (who use the framing device of a “fugue” to describe their plays), in “Salvation” multiple voices interweave with each other, leading to a dissolution of identity. I can’t even call the structure episodic, since every point brought up seems to resonate with each character. In “Salvation,” distinctions of time and place become distilled into one unescapable moment, where suffering and freedom can co-exist and even become interchangeable.

The results for the characters, and for the audience, are both liberating and exhausting. After the characters become acquainted with each other and resigned to their purgatory, the ensemble dives into their lives on earth with no reprieve. Characters begin atoning for their sins, revealing the mistakes they have committed (murder, physical abuse, abandonment, judgement, ignorance, unchecked privilege), and questioning the efficacy of either vengeance or forgiveness. In a philosophically striking moment, CC distinguishes between different modes of engagement with the past.

“Do you feel shame, or do you feel guilt, or do you feel remorse?” they say, questioning Richie’s confession of abusive behavior. “‘Cause shame is ‘I hate myself,’ guilt is ‘I feel bad about what I did,’ and remorse is what makes you actually change.” Despite providing clear distinctions between three feelings, CC’s questioning reveals the difficulty of distinguishing between the three in a moment of anguish.

In other words, the characters in “Salvation” are dealing with a lot at once. Topics brought up and interrogated include drug addiction, the use of guns for self-defense, marriage, adultery, the cost of therapy, definitions of love and heaven, possibilities for forgiveness, the privilege of second chances, American individuality, intergenerational cycles of pain, and transphobia. For both the characters and the audience, the sheer amount of information being confronted can be overwhelming. Abigail, revealing herself to be a therapist, eventually becomes a moderator of these discussions. She guides the characters to consider different angles and the systems influencing their decisions.

Prominent critics, particularly those in the New York Times, have been harsh towards plays that attempt to ambitiously address multiple topics at the same time. In these reviews, theater shows like “Circle Jerk” or “Jagged Little Pill” are derided as unfocused or excessive in their political advocacy. These critiques ignore the fact that the subjects of these shows, especially queer women of color, have to face multiple oppressions that intersect and compound one another. Claims that “there’s too much going on” reveal these critics’ privilege in being able to coalesce their personalities around single issues, or even cohere identities at all.

While I won’t criticize “Salvation” for the amount of topics brought up, I do wonder about the effectiveness of some of its storytelling choices in making audience members viscerally feel the pain of its characters’ decisions. The characters’ lines are fluid, constantly overlapping and commenting on each other. The cacophony of voices onstage parallels the show’s production process, which included a wide range of people, and also reflects the fact that one person’s pain is never isolated.

However, the fact that all nine actors are constantly speaking in the past tense means that the stakes of the show appear to be limited, with the fate of these characters having a definitive conclusion. When I was growing up, part of the power of hearing Job’s story in CCD (Confraternity of Christian Doctrine) classes for the first time was not knowing how it ended; I was on the edge of my seat, waiting to see if God would grant some sort of clemency, as if everything going on in this ancient tale was happening in real time.

The element of spontaneity is a defining characteristic of theater and storytelling. But for the characters of “Salvation,” everything has already happened. Guided by a therapist’s gentle hand, these characters are comfortable talking about theoretical issues, but aren’t compelled to imagine alternative futures for lives that are already over. The possibilities of redemption or change for themselves seem already foreclosed.

I’ve had to stay with this lack of redemption in watching “Salvation,” telling myself to refuse utopian notions of theater as a place of fabulous acceptance. The more I think about “Salvation,” the more I realize that “liveness,” or even being alive, is a privilege too many BIPOC communities are not afforded. As writer Claudia Rankine has noted, the condition of Black life is one of mourning; one of ceaseless, inevitable, ordinary violence. “Salvation” treats unjustified death and suffering as a condition of life for its subjects. The opportunity for divine intervention is something all of the characters crave, but none can bear to fully believe in. The show’s dramaturgy likewise supports this fact: for all two hours of the show, no presence of God is felt, no angels dangle from the ceiling heralding some new revelation, no bright stage lights bless a state of eternal rest. To approach “Salvation” outside the lens of literal or metaphorical salvation, outside of any progress narrative, and beyond the realm of “liveness,” is the show’s biggest challenge to its audience. As scholar Patrick Mahey has noted, this theatrical mode (similar to Tarell Alvin McCraney’s “Head of Passes,” his own adaptation of the Job story) recalls “hope” as defined by Dr. Cornel West:

“Hope wrestles with despair, but it doesn’t generate optimism,” West says. “It just generates this energy to be courageous, to bear witness, to see what the end is going to be.”

By the end of “Salvation,” the characters have not achieved any sort of actual forgiveness, nor heard back from God. Ultimately, it is the faith that they have in each other, the sheer amount of listening that each person on stage and in the audience has done, that allows our skepticism and hope to painfully converge. Late into the show, Will recounts his mixed feelings confessing his sins to a priest in the Catholic Church. For the first time in the show, the characters are questioning the fact that even though their lives are in a constant state of mourning, it doesn’t necessarily mean that nothing matters.

“Like, sure, you can go your whole life being mean and shitty and hurting everyone around you, and you can take that shit to your grave without ever having to reckon with it,” Will states. “Or, you can confess, say your Hail Marys, do the work to rectify the bad shit you’ve done and…maybe you can reach salvation. But I don’t know.”

Despite the ambivalence about arriving at clear conclusions, “Salvation” still finds justifications for living in a world where death is omnipresent. The allegory of Job ends in rectification, or what might even be called reparation. After reckoning with his existence, Job is granted back all of his wealth and children. No such reparation happens for the BIPOC subjects of “Salvation.” But the lack of true, utter redemption doesn’t mean that they won’t take whatever time they have and hold on for dear life. Even while wandering on a land fertile with the dust and ashes of their ancestors, Black and Brown people find some way to remain, to go to the end.