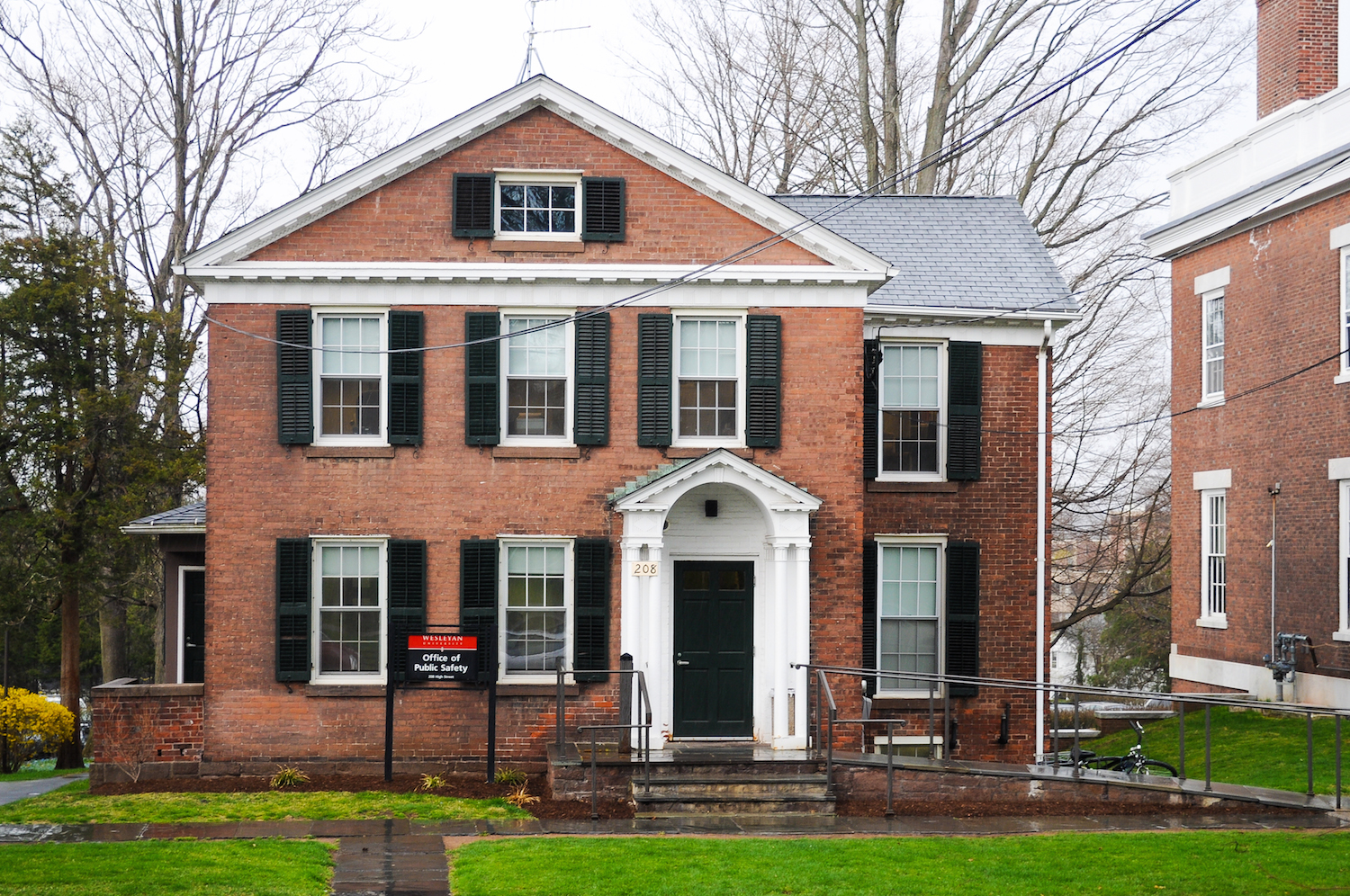 On Nov. 17, Danny Banks ’22 submitted an incident report to Dean of Students Mike Whaley regarding an incident that occurred around midnight on Saturday, Nov. 14. Residents of a house on Pearl St., including Banks, reported that two members of Public Safety (PSafe), Sergeant Kathy Burdick and Officer Melissa Widlak, knocked on the door of their house. According to the residents, Burdick and Widlack claimed that PSafe had received a complaint that the house was not following the University’s COVID-19 capacity guidelines. The officers’ arrival resulted in a search of the house. The following Monday, Nov. 16, the same residents received a visit from PSafe Lieutenant Paul Verrillo, which, according to Banks, turned into an aggressive and confrontational encounter.

Residents said they felt that PSafe had violated their respect and trust in both instances. After submitting the report, Banks was told by Whaley that the Equity & Inclusion Office, as well as Human Resources, would be reviewing the incident report. According to Vice President for Equity & Inclusion Alison Williams ’81, these complaints can be resolved in a formal manner, which would require a hearing, or an informal manner, which involves a restorative justice approach. The person who filed the complaint decides which resolution pathway will be taken.

The night of Nov. 14, Burdick and Widlak reportedly told residents that they had been waiting outside their house for an hour before knocking, which according to the residents, made them feel like they were being surveilled. Resident Justin Johnson ’22 answered the door and told the officers that he would need to check with his housemates to see if they were comfortable with PSafe entering the residence because their entry would cause the house to exceed its COVID-19 capacity of 10.

According to the residents, the officers interpreted Johnson’s remark as a refusal to allow access into the residence, and thus summoned PSafe Lieutenant Sharon McLaurin and ResLife Area Coordinator Stephanie Lewis, whose permission would be needed for them to enter without the residents’ consent. Residents of the house told The Argus that, to their knowledge, they had been following COVID-19 capacity guidelines at the time, with a total of eight people in the house.

“They pretty much came in and searched every inch of the house and touched all of our bedding,” Johnson said during an interview with The Argus. “They didn’t even knock, they just forced their way into a few of [the rooms].”

The behavior of the officers that the residents recounted is not against official PSafe protocol. According to Public Safety Director Scott Rohde, officers can enter in consultation and under the observation of a ResLife Area Coordinator who deems it appropriate. Despite this, the residents believed that the officers conducted the investigation in an excessively invasive manner.

After overhearing Johnson’s interaction with the officers from upstairs, Banks said he came down to assess the situation and spoke with Lewis, McLaurin, Burdick, and Widlak. According to Banks, there was no clear explanation from the officers as to why they were continuing the search.

“I just kind of told them who was upstairs, [told them that] ‘As far as I know my two roommates are up here, you don’t need to search all the rooms, no one else is hiding up here,’” Banks told The Argus. “They completely disregarded my statements.”

According to the residents, the officers continued upstairs, entering various rooms without knocking.

“I was in my room, literally wasn’t under any blankets, I was just laying in my bed in my underwear,” resident Ashton Scott ’22 said. “I wasn’t asleep yet, but I was getting there, and Public Safety opens my door, doesn’t even turn the light on, has flashlights, walks in.”

The residents expressed that they were frustrated and disturbed by this experience.

“I think a lot of us felt taken advantage of in a way and almost helpless,” Banks said. “At that point, there’s nothing we could do to say no or to stop PSafe. We didn’t feel like we had a chance to explain ourselves or get an explanation from PSafe. [We] kind of felt like we were very defenseless.”

The students also noted that the situation made them uncomfortable because they felt the officers were not taking proper COVID-19 precautions. Although they were investigating to ensure residents were following the guidelines, the four officers exceeded the COVID-19 capacity by entering.

“It was pretty ironic that they were in there for a COVID complaint, but then were touching all of our stuff, spreading germs,” Banks said. “That was just super jarring, not only to us but to [our other housemates], who were super disgusted when they [found out the officers] were touching all their stuff. [They] didn’t want to sleep in their beds after that.”

Johnson said that he was disheartened by the lack of respect for the residents’ time, especially at such a late hour. According to Johnson, after searching the house, the officers insisted on calling a carpenter to fix their attic door immediately, even though it was around 1:30 a.m and the door had been broken by previous occupants.

“Another thing that was kind of off-putting was the fact that after all of this happened, they returned thirty minutes later with a carpenter, who was trying to fix the broken door that they hadn’t fixed over the summer,” Johnson said.

The Argus was unable to identify and contact the carpenter at this point of the investigation.

On Nov. 16, Banks said he received a phone call from Verrillo, who told him that he would be arriving at the house. Banks said he was surprised by the short notice, and a few minutes later, Verillo arrived at the residence. The two went outside to have a conversation, which Banks described as an invasive confrontation in which Verillo accused and threatened him, using the events of Nov. 14 to justify his anger.

“He just starts ripping into me, chewing me out,” Banks said. “I didn’t really say anything throughout that entire interaction with him. All I could do was nod my head and say okay.”

Banks reported that Verrillo made several threatening comments, including statements suggesting that he wanted to kick Banks and his housemates off campus next semester. According to Banks, Verrillo also used inappropriate language and raised his voice to the extent that Banks’ housemates overheard the interaction from inside the house.

After the events of Nov. 16, Banks was distraught. Banks, a Black man, said he has had troubling experiences with authority figures and law enforcement in the past, and that the encounter with Verrillo incited feelings of trauma.

“I have had past encounters with law enforcement that have negatively impacted my life or put my life in the direct path of danger, and the incident with Lieutenant Verrillo triggered those same feelings of helplessness, anger, and fear,” Banks wrote in the incident report he had filed to Whaley.

Later on the day of the 16th, Banks scheduled an emergency meeting with Counseling & Psychological Services (CAPS) and reached out to his Head Football Coach Dan DiCenzo for support. When asked about the incident, DiCenzo expressed surprise and displeasure at Verrillo’s reported behavior.

“[That information] was very disturbing to hear,” DiCenzo told The Argus. “I was just really surprised that any security officer would call a student and have that type of interaction with a student and raise their voice in that manner and say those things and think that’s okay.”

DiCenzo later had a conversation with the Director of Public Safety Scott Rohde about the incident.

Residents expressed that their encounters with PSafe personnel are not what they expect from a campus dedicated to ensuring the safety of its community.

“I don’t think it shows PSafe in a great light,”  Banks said. “It shows how PSafe inflicts fear instead of safety on the students.”

“It feels like Public Safety and some people that are high authority are against us,” Scott said. “It feels like it’s us against them, when we should all be one Wesleyan family, one Middletown community. It just doesn’t feel like that right now, and I think there’s something wrong with that.”

Banks will meet with members of Human Resources next week to discuss the incident further.

Annie Roach can be reached at aroach@wesleyan.edu