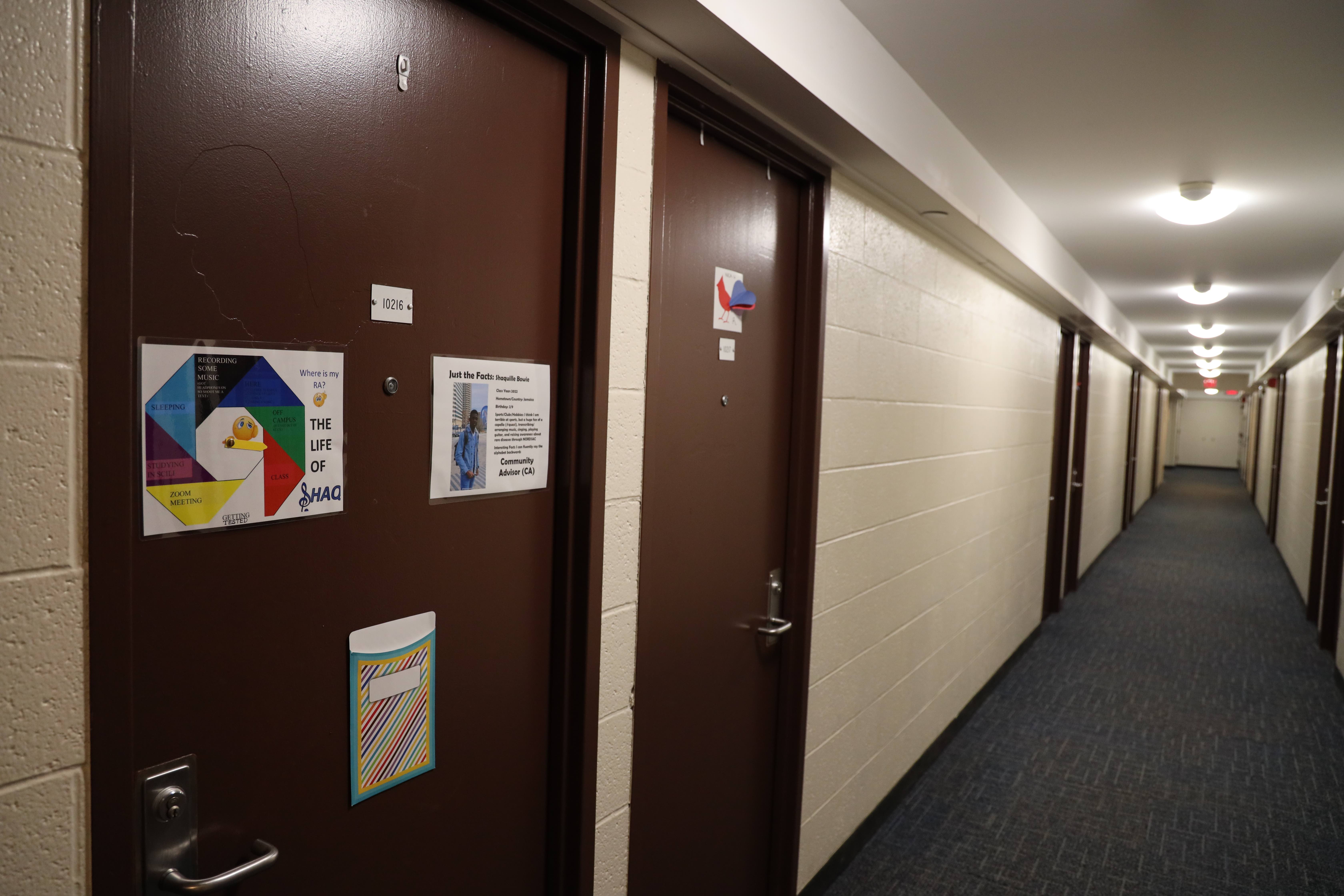 Residential Life (ResLife) student workers, in collaboration with the University’s United Student/Labor Action Coalition (USLAC), sent a letter to Associate Dean of Students and Director of ResLife Fran Koerting and other members of the University administration demanding $250 hazard pay per employee for working during the campus closure, which was announced on Thursday, Nov. 19. Additionally, a petition advocating for ResLife student employee hazard pay was posted in WesAdmits Facebook groups on Tuesday, Nov. 24. At the time of publication, the petition had 809 signatures, around 500 of which came in the first eight hours after it was shared.

The University responded by email to the ResLife student staff denying their request for hazard pay, and in response, USLAC published their counter-arguments to the University’s email via social media.

USLAC members and student ResLife workers wrote the letter, which they sent to Koerting and other administrative members. The letter concerned student workers not receiving hazard pay for remaining on campus to work after the University urged all students to return home following an uptick in COVID-19 cases on Thursday, Nov. 19.

“So much can be thrown onto RAs and…it’s really easy to take advantage of RAs,” a RA for a primarily first-year residence hall said. “Most RAs are [First Generation, Low Income] students and students of color, definitely disproportionate to what the Wesleyan demographics are. I think it’s really hypocritical of Wesleyan to put some of their most vulnerable students in these hazardous potions without offering hazard pay or even acknowledging it.”

“I think it’s really important moving forward that [we acknowledge] the work that essential workers had to do,” one ResLife student staff member said. “It’s a really big testament to ResLife staff members that we had made it this far through the semester because [Public Safety] (PSafe) wasn’t telling people to wear masks in the dorms, and admin people weren’t doing that. It was the ResLife staff workers who lived there.”

Through an email response to both the letter and petition, Koerting maintains that ResLife has been able to support its student workers despite being in the midst of the COVID-19 pandemic and provided all student workers with personal protective equipment (PPE) such as gloves and hand sanitizer.

“We agree that our student staff are among Wesleyan’s most essential workers, and we are taking many precautions to keep [them] safe during closing,” Koerting wrote in a Tuesday, Nov. 24 email to the ResLife staff.

Koerting also gave examples of how ResLife has supported their student workers throughout this semester by increased virtual communication and by providing additional PPE.

“We have been holding virtual staff meetings, virtual implementation of the residential curriculum, increased one on ones with the Area Coordinators, access to PPE, decreased rounds and face to face interactions with students, and holding students accountable to expectations through the judicial process,” Koerting wrote in an email to The Argus.

In her email, Koerting provided three primary reasons for denying ResLife student workers hazard pay: many University employees, including those working for Bon Appetit, Physical Plant, and PSafe, are also not receiving hazard pay; the time to request additional compensation has passed, and new requests for compensation are likely to be denied as they generally have been in the past.

Addressing the first reason given by the University—than other employees are not receiving hazard pay—USLAC believes that the University can do more to bolster all workers, particularly students who work for ResLife.

“Wesleyan can and should be paying all workers hazard pay during this pandemic,” a USLAC Instagram post from Nov. 25 reads. “Student Residential staff need hazard pay immediately because of the campus’s closure under emergency circumstances. We will not continue to allow Wesleyan to pit workers’ needs and demands against each other.”

The second reason given by the University was that increased compensation can only be requested during the normal budgeting period in the fall, which has already passed. However, USLAC insists that the problems faced by ResLife student workers are particularly pressing and demand immediate action.

“We are sure processes exist to pay student staff who are working closing an extra $250 right away,” a separate USLAC Instagram post from Nov. 25 reads. “There’s no reason that student workers, who are facing an unprecedented situation because of the pandemic, should have to wait until next fall to have their demand heard. Wesleyan has encouraged students to adapt to the unique situation we have been in since March; we are asking the school to adapt with us by creating a fairer work environment.”

The final reason given was based on the fact that previous requests from ResLife to the University administration for an increase in compensation for ResLife student workers comparable to the Residential Comprehensive Fee (RCF) were not approved.

“The University typically only has enough funding for approximately one-quarter of the requests that are received, and other requests, such as additional staffing for CAPS, have taken priority,” Koerting wrote in the email to the ResLife staff. “We will continue to advocate for increases in our student staff compensation.”

Koerting’s email also stated that ResLife workers should face only limited interaction with other students during closing; however, student Reslife workers found this was not the case because not all students had properly cleaned their rooms before leaving campus, forcing ResLife student workers to interact with more people. In previous years prior to the COVID-19 pandemic, Reslife student workers have been required to conduct closing procedures, which include making sure residents have left University buildings, assisting with Fire Safety inspections, and locking up room and building doors.

“Staff members have been talking among themselves after closing about how we wished that students had been more responsible for how they cleaned up after themselves because I guess it’s not widely known that it’s students going through doing these inspections,” a ResLife Staff student worker said. “If they made a mess or there were a lot of alcohol or drug violations, it was a lot on us, and we had to interact then with more people like PSafe or our area coordinator and like get them involved, or if there was a student still living there, we had them dump the alcohol. It’s just adding more layers of interaction with people and it’s unnecessary.”

Additionally, many students did not move out on time and were in their apartments and dorms without masks on when ResLife student workers arrived to close residences.

“It really put us in an awkward situation as well, because like a lot of students hadn’t moved out at the time that they’re supposed to, so we were going through people’s apartments and there were people in there not wearing masks,” a Reslife student worker said. “They sent out the email that, if you can go home, it’s back to phase one, and you can’t go into anyone else’s dorm or residence space. Well, we were going into other people’s dorms or residential spaces having to lock windows, having to adjust the heat and touch things like lights and blinds.”

Each year, half of ResLife Staff are assigned to work during Winter closing and half Spring closing. This semester, all but one ResLife staff member assigned to Winter closing participated in the closing processes. According to Koerting, the ResLife staff member who did not participate in the closing process had expressed discomfort staying due to personal reasons. This student received permission from their supervisor to leave early along with the rest of the students.

“We did not hear from any student staff members who were still uncomfortable after we explained all the changes that had been implemented for this closing,” Koerting wrote in an email to The Argus.

However, RA’s we spoke to said that not all students felt comfortable speaking up with concerns, and even with the petition, many still don’t for fear of losing their jobs.

“This is also a really scary thing for people to do, and I think it’s hard for people to put their names on something like this,” one RA said. “It’s a mix of excitement and fear and frustration that we’re put in a position to be afraid to speak out about our jobs.”

Despite the fear, the petition has empowered students working for ResLife to become more vocal in favor of better working conditions.

“Every worker at Wesleyan has the right to feel safe in their job,” one ResLife student worker said. “I think our student staff is in a unique position in which we can speak in terms of the university workers as a whole because we are very connected in that way.”

Oliver Cope can be reached at Ocope@welsyean.edu