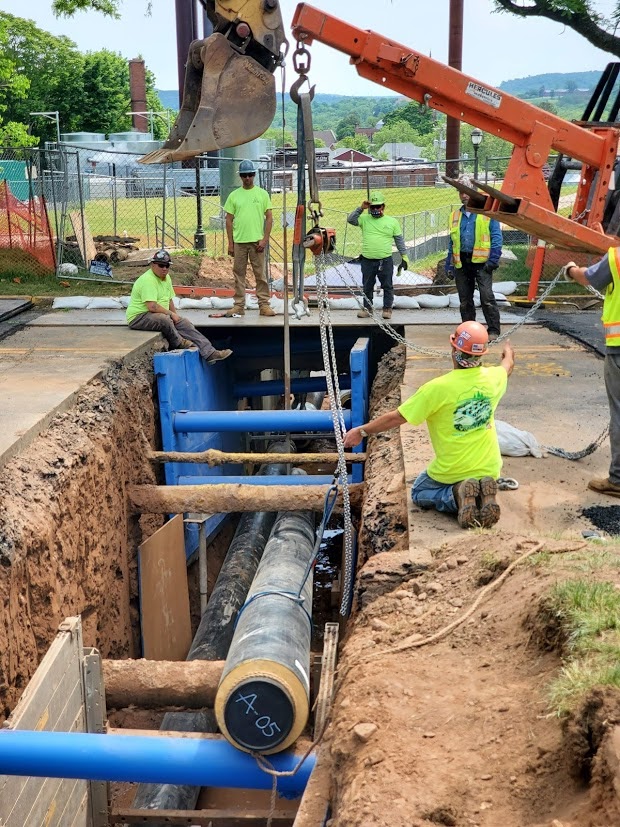 The first phase of the University’s steam to hot water pipe conversion was completed in October 2020. Approximately 3,200 feet of pipes were installed to connect the Central Power Plant to Fisk Hall, the Center for the Americas, Boger Hall, North College, Usdan University Center, the President’s House, and the Center for the Arts (CFA) complex, at a total cost of $5.8 million.

The steam to hot water pipe conversion is part of the University’s goal to achieve net-zero greenhouse gas emissions by 2035.

“The very sexy, exciting, dynamic, beautiful changing steam [pipes] to water [pipes]—all of which is underground, nobody will ever see it—is the most important thing we can do to become more energy efficient,” President Michael Roth ’78 said.

With the current steam pipe infrastructure, steam is generated by heating water up to 300 degrees Fahrenheit. Once the steam is generated, it moves freely through the pipes without the aid of any electrically powered pumps. However, because the steam is so hot, some of that energy is lost in the underground piping system.

“Unfortunately, we estimate that only 70% condensate actually makes it back to the plant, which not only wastes water, but a significant amount of energy as well,” Physical Plant Facilities Project Engineer Andrew Plotkin wrote in an email to The Argus. “The energy that was removed from the steam, is used to heat the buildings.”

Using hot water pipes instead of steam requires pumps. However, with these pumps, the water only needs to be heated to about 120 degrees Fahrenheit.

“There is going to be a pretty substantial decrease in our carbon footprint just because of the difference in energy needed to raise the temperature of water to 120 degrees versus 300 degrees,” Sustainability Director Jen Kleindienst said.

With the pipe conversion, hot water will be generated by boilers in the Central Power Plant that burn natural gas and distribute the hot water through pipes to each building. Once inside the buildings, the hot water moves through a heat exchanger, giving up some of its heat to the building. The water is then returned to the power plant to be heated again, decreasing the amount of water wasted in the process.

According to Kleindienst, converting the University’s pipes from steam to hot water has several significant advantages.

“The technical aspect of it is very easy,” Kleindienst said. “You dig up pipes. You put in other pipes. You connect buildings. The real challenge is a financial one.”

This conversion is the first of eight phases that are expected to be completed in 2028 at a total cost of $39.3 million (accounting for inflation) or $35.4 million in today’s dollars. In total, 10,000 feet of steam pipes will be replaced with the new hot water piping. 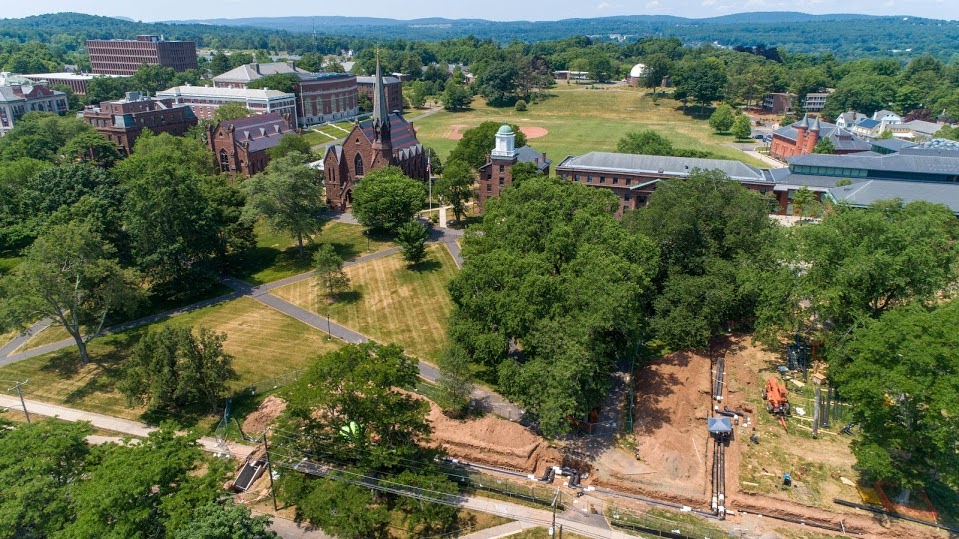 At present, Plotkin hopes that phase two of the pipe conversion will connect the Public Affairs Center (PAC), South College, the Memorial Chapel, the Patricelli ’92 Theater, and Judd Hall to the Central Power Plant. This phase is expected to cost $4.6 million. However, whether this phase of the conversion will go ahead in Summer 2021 as planned depends on whether the PAC conversion is approved to go ahead at the Board of Trustees meeting in November.

When phases three through eight of the conversion will be completed is yet to be determined.

“There is not a clear path of when will phase three, four and so on [will] happen, or when will the renewable installation happen,” Kleindest said. “That is something that there is still a lot of internal conversation about because again it’s about money, and in these current times, when money is tight anywhere, it makes an already challenging financial conversation a bit harder.”

Once the conversion is complete, the University can then begin to make the transition to renewable energy by replacing the existing natural gas boilers with ground source (geothermal) heat pumps. The installation of heat pumps would allow buildings to be heated through electricity, instead of through fossil fuels.

“Once our campus is fully heated by hot water, we can start the real work of eliminating fossil fuel use on campus by installing heat pumps to replace our natural gas boilers,” Plotkin wrote.

The University can then begin to generate electricity with photovoltaic (PV) solar panels and by purchasing renewable energy from the grid.

The University hopes to complete this final phase of decarbonizing energy infrastructure by 2035.

“We based our initial master energy plan on a transition to renewable energy by 2035, however this is a very aggressive goal and needs the support of students, faculty, staff, and the administration to achieve,” Plotkin wrote.

Roth agreed that achieving climate neutrality by 2035 is an ambitious goal, but that the University should still make a concerted effort to achieve it.

“It’s idealistic, but I think we should work towards that ideal.”