In the Zilkha Gallery, “A Sculpture, A Film, and Six Videos” Explores Alternative Temporalities 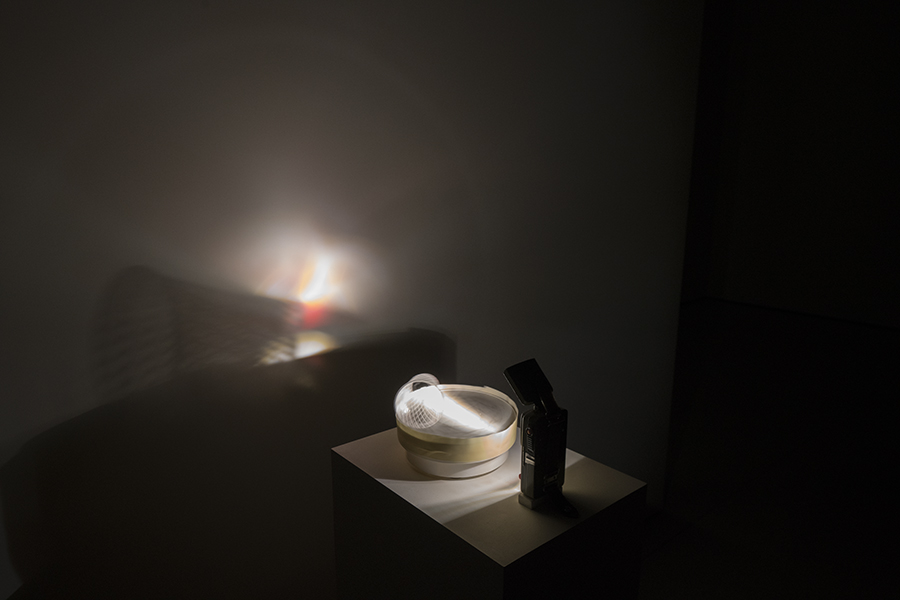 If you walk into the Ezra and Cecile Zilkha Gallery (Zilkha Gallery)  at the University’s Center for the Arts this semester, you will have a very different experience from previous years. Instead of seeing the space’s large atrium, with floor-to-ceiling windows that let sunlight stream through the gallery, your eyes will have to adjust to a completely black void. The only light within the space comes from the gigantic screen projecting a film played on a continuous loop, along with the small flickering of a sculpture in the corner of the gallery. After sitting down on benches or chairs positioned in front of the screen, you will be immersed in a cinematic experience.

The transformation of the Zilkha Gallery into what resembles a movie theater is a part of the current exhibition, “A Sculpture, A Film, and Six Videos,” which is running until Nov. 22, 2020. Although the gallery is only open to University students, faculty, and staff due to COVID-19 restrictions, the exhibition is part of an ongoing effort by the Center for the Arts to provide the University community with visual arts experiences both on campus and online.

The “sculpture” in the gallery is the small “Son et lumière (Le Rayon Vert)” by Peter Fischli and David Weiss. The piece consists of a small turn-table that slowly rotates a cylindrical cup while a small light illuminates the proceedings. Even though it might seem hastily put together, the continuous, asynchronous movements and sounds of the cup pull viewers into a trance, the reflected light being both ordinary and kaleidoscopic. Since it’s the only work of art consistently displayed in the gallery this semester, it’s the reference point onto which all of the other works are connected.

The “film” is Tacita Dean’s “The Green Ray,” a 16 mm. film that links a cosmological phenomenon—the green ray refers to the final ray of sun in a sunset that streaks across the horizon before darkness—with the color’s symbolic meaning, as referenced by artists like Eric Rohmer and writers like Jules Verne. The film has been screened twice already this semester, and will have its final screening in the Zilkha Gallery on Friday, Nov. 13.

The “six videos” of the exhibition’s title refers to the six videos that are projected onto the gallery’s new screen, each of which run for two weeks before being switched out. Each of the films are meant to initiate a different sense of temporality from everyday life.

“The video works address the continuities and discontinuities in time,” the gallery’s website reads. “They connect a deep mystical time to the present tense, visualize cycles, and reach into the future for the potential it may hold for transformation.”

Screenings that have already taken place this semester include “Americas: Veritas” by Renée Green ’81, about the legacy of architect Le Corbusier’s modernist work in Cambridge and Argentina; “The Mermaids or Aiden in Wonderland” by the Karrabing Film Collective, an exploration into the legacy of settler colonialism that has created a toxic environment in Australia; “Winters Spring” by Trisha Baga, a cerebral meditation on ceramics, space, and music; and “Stand in the Stream” by Stanya Kahn, a montage of digital footage documenting protests and online chats the reflect late-stage capitalism.

Upcoming screenings include “APEX” by Arthur Jafa, a fast-paced series of images documenting Black life in America (Jafa is likely the most recognizable artist in the video series, having collaborated with Spike Lee, Stanley Kubrick, and Solange); and finally “BRIDGIT” by Charlotte Prodger, an encapsulation of a year of the artist through iPhone videos and autobiographical voiceovers.

In addition to these professional artists, the online series “Reiterate, Resound—Visualizing Time” features short films by current University students and alumni, who also engage with the concept of time.

The Zilkha Gallery’s exhibition is also available remotely, on their website that displays a different set of videos created by the artists featured in the in-person show. Though inherently restricted in their impact, the online videos tell stories from various perspectives through footage montages that span countless settings and temporalities.

“ED/HF” by Renée Green, for example, takes viewers through a compilation of voiced-over footage that describes, in poetic fragments, the life of experimental filmmaker Harun Farocki (born Harun El Usman Faroqhi). From shots of an audio recording studio to footage of Germany and Indonesia, where Farocki lived, the film functions as a conversation between Green and the late filmmaker. Its audio, first composed of strings of words such as “being, walking, touching, and holding,” transitions into a more coherent narrative, inviting viewers to piece together the meanings of the previous fragments. Though inconsistent in place, time, and narrative style, the film’s elements coalesce to portray a beautifully nuanced story of a life.

Karrabing Film Collective’s “Wutharr, Saltwater Dreams,” another online video, tells the story of an Indigenous Australian family’s broken-down boat through the lens of human and ancestral narrators. Like with other videos in the series, the complete story arises only when the viewer pieces together fragmentary elements of film and dialogue. In early shots of the video, we see water, a family, an approaching police car and a man trying to fix a broken motor. We then come to learn, through retrospective chapters with titles such as “Linda’s version” and “the ancestor’s version” that the family became stranded, and had to illegally shoot off a flare in an attempt to be saved. Meanwhile, the film becomes grainy and distorted, with voices of multiple characters overlapping to chime in. Faced with mystifying bureaucratic consequences and disconnected accounts of past events, the family’s confusion rubs off on the viewer through the video’s complex format.

Stanya Kahn’s “Stand in the Stream,” which screened in person at the Zilkha Gallery, is also available online. The collection’s longest work, one hour in runtime, is similarly composed of fragments of video and audio. Shot over six years of Kahn’s life, the film centers around the artist’s aging mother, whose experience with dementia advances throughout the runtime. In between clips of her mother, Khan places footage of protests, anonymous online video chats, nature, and more. As the film progresses, the connections between the seemingly disparate elements are made clear. We learn that Khan’s mother was an activist, whose mother also experienced dementia. We learn that Kahn’s son, who first appears in the womb and then as a toddler, comes to participate in protests against Trump as an adolescent by the end of the video. Through its deeply personal and home-made style, Kahn’s “ambient digital feature” enters viewers into a world that is highly affecting and politically charged.

While it is possible to draw through-lines between the show’s videos, exhibition curator and Associate Director of Visual Arts Benjamin Chaffee prefers to leave such connections up to the viewer.

“In many ways what this show attempted to do was to create a formal structure in which different works could sit but not over-determine or spell out how they might connect with one another,” Chaffee said. “So we connected [the videos] back through the sculpture or ideas about time, but not specifically about certain modes of video making or subjectivity of the artist or history or political situations, that was something we left as open as we could. The only way you’re actually relating them is through memory or an idea you have about the other.”

Despite their avoidance of a common subject, the collection’s videos, with their various temporalities and considerations of lineage and mortality, inevitably deal with time.

“Just as the construction of video reiles on the viewer since it’s a series of still frames that we put together…into a continuous experience, I feel like the same thing is true about time,” Chaffee continued. “It is a bunch of stimuli that we construct into a continuous experience of time and to whatever extent the show can be a model for investigating or interrogating how our current experience is changing every day, every week, every month I was hoping that it could do that.”

The Zilkha Gallery’s exhibition intern for this semester, Paul McLaren ’21, agreed that the exhibition works as an intertextual dialogue between the six videos.

“One of the most exciting and fascinating things about the exhibition is how [the videos] meet one another, and interact with one another, both conceptually, aesthetically, and visually,” McLaren said. “The curation and the selection of these six videos in particular are what provide the most interesting questions [and not] the videos in isolation.”

McLaren has worked closely with Chafee not only on preparing next year’s exhibitions, but also on increasing the output from the gallery’s Instagram.

“In a lot of ways, it’s quickly becoming the standard for many contemporary art galleries, commercial galleries, and museums to have a strong Instagram presence in the art world,” McLaren said.

McLaren also sees the gallery’s increased social media engagement, and the gallery itself, as a way of serving the Wesleyan community during the COVID-19 pandemic.

“I think that having relevant contemporary art on college campuses is an essential part of a liberal arts education, or really any education from any discipline,” he said. “Artistic thinking is relevant to a number of academic disciplines and subjects. [The Zilkha Gallery’s] videos, they sort of offer a reprieve in some ways. I find the space, purely on a logistical level, to be very meditative and relaxing. Irrespective of what’s happening there, I think it’s really nice to sit and decompress.”

Given its handling of politics, death and a distorted sense of time, “A Sculpture, a Film, and Six Videos” feels just as current as it is connected to history, as engaged with the global economy as it is specific to Wesleyan. Whether viewed through a laptop screen or projected onto the Zilkha Gallery’s walls, any viewer can walk away from the show’s evolving content with a deeper understanding of their present experience.

“A Sculpture, a Film, and Six Videos” will be in the Zilkha Gallery and online until Nov. 22.