Dr. Chanda Prescod-Weinstein Speaks to Students and Faculty About Diversity and Inclusion in STEM 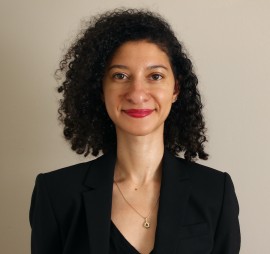 Assistant Physics Professor at the University of New Hampshire Dr. Chanda Prescod-Weinstein gave a Science and Society talk titled “The Problem with Diversity and Inclusion” to over 100 of the University’s faculty and students via Zoom on Friday, Oct. 16. In her talk, Prescod-Weinstein spoke about the legal history of diversity and inclusion in the United States, along with the power dynamics between the scientific community and traditionally marginalized groups and the impact of racism in science, technology, engineering, and mathematics (STEM).

Prescod-Weinstein helped co-found “Particles For Justice,” the social justice group that organized the ShutDownSTEM movement during the summer where scientists paused their work to show support for the Black Lives Matter movement and protest on-going racism in the scientific community.

Prescod-Weinstein’s scientific research lies at the intersection of particle physics and astrophysics. She received the 2021 Edward A. Bouchet Award from the American Physical Society, the LGBT+ Physicists Acknowledgement of Excellence Award in 2017, and was recognized by “Essence Magazine” for “Paving the Way in STEM and Breaking Barriers.” Prescod-Weinstein also serves as a columnist for New Scientist magazine.

To open her talk, Prescod-Weinstein posed a single question to her audience: What will diversity, inclusion, and equity discourse do for Jacob Blake’s children? Prescod-Weinstein was referring to Jacob Blake, an African American man shot seven times by a police officer in front of his three children in Kenosha, Wisconsin in Aug. 2020.

“What does it mean to say that we want diverse classrooms when we are materially damaging children’s opportunities to have childhoods?” Prescod-Weinstein asked participants. “We tend to talk about diversity as, okay, how do we get more black students in the classroom. We don’t say, ‘we’re living in the wake of slavery, what does it mean that there aren’t enough black students in our classrooms, that my black classmates feel excluded, that my indigenous classmates feel put upon.’ It’s a completely different question to ask yourself.”

For Prescod-Weinstein, it is clear that the current discourse surrounding diversity and inclusion in STEM is not justice-oriented. Instead, the focus lies on increasing the number of students from minority groups majoring in physics or attending a certain university—all important things that need to happen—but Prescod-Weinstein argues that those goals can be accomplished by getting to the root causes of racism in society.

To illustrate why addressing racism in STEM and increasing inclusion is so important, Prescod-Weinstein raised the question of what happens to a Ph.D. student’s work if they decide not to continue in their field.

“If you don’t get a post-doc because bias becomes a factor in hiring, or if the racism has been so bad that you decide you don’t want to continue in academia, you’re not out there advocating for your dissertation,” Prescod-Weinstein said. “There are ideas that get dropped, actual scientific lines of thought that get dropped. It doesn’t mean that as a person of color you see science differently, but as a person, you have your own take on science, and that science gets dropped.”

Prescod-Weinstein then delved into the broader relationship between STEM and historically underrepresented communities. She raised the example of the Tuskegee Experiment, a study that began in 1932 in which researchers identified African American individuals with syphilis and monitored their symptoms over a 40 year period. Instead of informing the participants of their diagnoses, the researchers withheld the information, knowingly allowing the individuals who were infected to spread the disease to their sexual partners. Prescod-Weinstein described the lasting effect that the public exposure of the experiment had on the African American community at large, and notably, her mother.

“I ended up being born at home partly because my mom was waiting for a midwife to come with her to the hospital because she didn’t trust the doctors to keep us alive; these things have long-term repercussions, particularly as we’re seeing that Black women like my mother do have higher mortality rates at birth and that Black babies have higher mortality rates at birth,” Prescod-Weinstein said. “Doctors are often the only scientist that the average person of any race will ever meet, so in some sense, they’re the gateway to science for a lot of people. When doctors become associated with these kinds of abuses, it affects the entire community’s relationship with the idea of science.”

Another conflict Prescod-Weinstein discussed was the tension between the Kanaka Maoli, or native Hawaiians, and scientists looking to build a 30-meter telescope on the volcano Mauna Kea. The telescope was set to be built on land sacred to the Kanaka Maoli. Other telescopes had been built on the volcano before, each accompanied by the promise that more would not be built. To the Kanaka Maoli, it was clear that there would always be another request to build there, another excuse for why it had to happen, another promise that this time would be the last. In the summer of 2019, they decided that they had had enough. Hundreds of people camped at the base of Mauna Kea for about a week to protest the construction of the telescope.

While it might be tempting to frame the conflict as a clash between modern science and a less modern religious group, Prescod-Weinstein pointed out that the predicament is much more nuanced than that.

“I think that we want to get away from a framing that articulates Kanaka ideas as not modern and not scientific,” Prescod-Weinstein said. “This is not science versus religion. This is, from my point of view, science without ethics versus science with ethics. I might flip it and even say, when are scientists going to modernize the relationship with ethics?”

At the end of her talk, Prescod-Weinstein touched on the incentive behind the “Particles for Justice” movement and her takeaways from the movement’s initial goals.

“We really wanted to encourage people not just to think in terms of the ivory tower and in terms of equity, diversity, and inclusion,” Prescod-Weinstein said. “The statement we posted on the website explicitly said that this was not a call for more diversity, equity, and inclusion workshops, because what we didn’t want was for people to just sit around and listen to someone give a talk….. You need to go and take what you have learned and try to change the way things are in the world.”