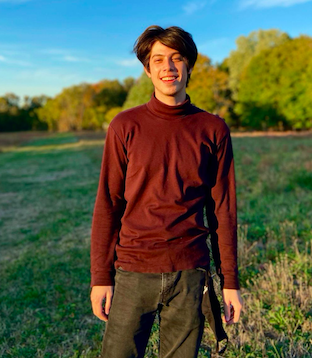 You might have seen Matthew Rubenstein ’21 speed-walking across campus or scream singing at various musical events. From audio engineering at Red Feather Studios to singing in a Radiohead Cover Band, Rubenstein has done it all. The Argus Zoomed with Matthew to talk about beautiful physics, ugly sounds, and his new musical project, “Outlaw Honey.” Be sure to check out his new single, released on Spotify today!

The Argus: So, Matthew, how are you doing these days? Are you on campus?

Matthew Rubenstein: Yeah, I’m on campus. I’m doing pretty erratically, I would say, just because I’m not used to being around people. But I would say that my erraticness generally averages out to a fine.

A: I understand you are something of a music god on campus. Can you talk about your music? Have you produced anything over quarantine or since you’ve been on campus?

MR: Yeah. You know, it’s weird because quarantine is like the first time I ever started to feel pleased with my music. I started releasing stuff under the band name “Outlaw Honey,” and I’ve just been feeling relatively good about it. I don’t know. It’s just been feeling different to me since quarantine started. Being isolated really kind of threw my perspective on life, and I’m sure everyone’s perspective on life, for a wild ride. So I felt like I needed an outlet to understand what, how I was feeling. I just, honestly, I’m sorry, I feel like I’m being really incoherent, but I think quarantine just made my thoughts less coherent. So I had to use music in a less intellectual way and just more kind of focus on my feelings. I’m really happy about that. And I’m really happy with the kind of stuff I’ve been doing.

A: What kind of stuff have you been doing recently?

MR: Oh it changes with every song, because I feel like I’m so scatterbrained and my interests are always going in a bunch of different directions. But my most recent song that I did, which is coming out this Friday, is really Beach House inspired. Just generally I’ve been going in a more minimalist direction, in a more pretty direction. Which is really different for me, because I used to not value things sounding pretty. In fact, I used to really value things sounding ugly and chaotic, but now for whatever reason, I just, I just like things sounding nice. It’s probably because of quarantine, which was this abnormally quiet time for me. Like when I’m in the world, I’m just so immediately reactive to this slew of social and cultural stimuli, so being at this weird distance from it all was really novel and strange. It’s crazy because I used to feel like music was purely this manipulation of cultural signs, you know. It’s all camp or theatre or something like that. But now since I’ve had this time where I was at such a distance from any culture at all, I don’t really feel like I’m trying to express cultural signage anymore. So aesthetically, I’ve really gotten into a more isolated feel like… intimacy, quietness, folksiness, personableness, that sort of thing.

A: What has the music scene been like for you on campus?

MR: You mean, what have I done? Or like, how has it affected me?

MR: What have I done? I mean, I work for Red Feather, the music studio. The studio is kind of, not really up this semester, just cause of COVID concerns. But I used to in more normal times do a lot of stuff for the studio. That’s cool just because I’ve gotten to see a lot of people in their creative zone. I audio engineered once for these students who were making a death metal track, and it was one of the best sessions I’ve ever had. They were just so into it and were so invested in the sound. It was cool. And I never really get to work on death metal in my own work. I don’t really have the immediate tools that are necessary [laughs].

What else have I done? I performed at open mics and MASH and stuff like that, you know? Last year I was in a Radiohead cover band that I really just, uh, I adored all the people in it. And as both people and musicians. It was just really lovely. And then, you know, I make my own stuff. But that’s kind of not necessarily something that’s within Wesleyan life. That’s, that’s kind of just me and my room.

MR: We wanted to do battle of the cover bands, and we all liked Radiohead, and at the time I was feeling like being a real angsty boy. I don’t know. I love Radiohead. Honestly, what it is is that I think Radiohead was the first time that I really listened to ugly sounds and had it really feel true to me. Yeah. That’s when I kind of got obsessed with the aesthetics of ugliness. Thom Yorke, the lead singer of Radiohead, has this really kind of grating moan sometimes. And, and you know, they deal with these kinds of creepy sounds, this kind of tension and dissonance in their music. Listening to Radiohead just really unlocked a lot of things for me, artistically. So I really, you know, it was just it’s really something that I enjoyed expressing. I have a huge soft spot for them. What can I say?

As far as how music at Wesleyan has affected me…. I don’t know. It’s a bit of a cliche, but I really appreciate that people at Wesleyan just, you know, enjoy being strange. I just think it gave me the space I needed to be a freak for the moments when I wanted to feel like a freak and to wear black lipstick and kind of do this, this theatrical thing, because I felt very theatrical inside.

A: Is there any moment from your time at Wesleyan that sticks out to you? When you were able to kind of embrace the strangeness and flamboyance?

MR: Definitely the aforementioned Radiohead cover band. I think that college and just being a young person in general is a pretty insecure time. Maybe. Maybe I’m just projecting, but it was really lovely to be in it, because it was a lot of people there. And I felt like I was being a very strange version of myself. You know, I was screaming into the mic and, and contorting my body into all these creepy, spindly positions. And I really felt like I was being honest to a certain extent, even though it was a cover band. And just to have people seem to like the performance, was just a crazy experience and one of my favorite memories at Wesleyan. I feel pretty lucky to have had it cause it just seems like a rare thing to be this incredibly strange version of myself and then having people resonate with it in some capacity. And it was also super nice to perform with a group of these incredibly talented musicians, and have them affirm what I was doing. Because I don’t collaborate that much, and when you’re working with people you respect so much, it’s just a really sweet thing when you build off of each other in this positive way.

A: So, I know you’re a physics major. What’s the story there?

MR: Hmm. At the time, I think it’s because I was good at physics coming out of high school, and it made me—you know, if I’m being self critical—maybe it’s just cause it made me feel smart. But I think if I’m being more generous, it’s because I think it’s a really beautiful subject in its fundamentality. Because all the other sciences, in a sense, are at more macro levels. And I feel like physics is more in the nitty gritty. It’s like what are the building blocks of the universe? And I think just generally math and physics have been really great for me. I’m glad that I’ve cultivated the part of my mind that can assess reality in ways that aren’t like my crude senses, you know. I think that’s helpful in a lot of ways, just, just even if it is just practice. I don’t intend to go to grad school or stuff like that, but I just think it’s a good mental exercise for life.

It’s also just a cool group of people. People will go on these tangents about, “Oh, the beauty of physics or whatever,” and people will totally pick up what’s being put down. I guess I like to think that there’s this emotional draw to the subject for people. I could just be assuming that other people feel how I feel, but I really do get the sense that there’s this emotional edge to the group. Is that ridiculous? My only evidence is that the overlap between the math and physics majors and the music community on campus, particularly the angsty music community, it’s pretty wild. I’m not saying there’s a connection, but…. No, I guess that is what I’m saying [laughs].

A: I really can’t help myself. Speaking of emotions, can you share about your strong views on Halloween and Christmas movies?

MR: [Laughs] I don’t know how hot the takes are. I feel like I just like what other people like, but I like it a lot. I don’t know. I think “The Nightmare Before Christmas” has to be in my favorite, top ten movies of all time. I don’t know what it is. I also think there’s something to be said about holiday movies at large. I feel like holiday movies are allowed to be more childish, even if they’re not explicitly children’s movies because holidays are family times traditionally. So I think there’s like, I don’t know, people are more willing to play into cliches like this childlike wonder of things and maybe be a little bit more romantic. And so, maybe that’s why I like them so much. Oh gosh, take for example “It’s a Wonderful Life.”

A: Yes, I was hoping you would mention this movie.

MR: Absolutely! I mean, it’s become so cliche in popular culture, because it’s this old movie, it’s this classic thing. But, it’s just so beautiful. I cry just thinking about it.

A: For the record, I can attest that Matthew has cried recounting the ending scene of “It’s a Wonderful Life.”

MR: It’s because of the community! The community! Another thing, I mean, I was raised Jewish, and I’m not religious or anything, but I think Christmas is so nice. It’s everyone just being like, “I would like to be nice for a month,” and it’s just like, wow. That’s so adorable!

A: Is there anything else that you’d like to say?

MR: I mean probably. Hmm…. Wear your masks! Wash your hands! And uhh…. Look up “Outlaw Honey” on Spotify if you feel like it. It’s me. I’m “Outlaw Honey.” Listen to my music if you want.

This interview has been edited for length and clarity