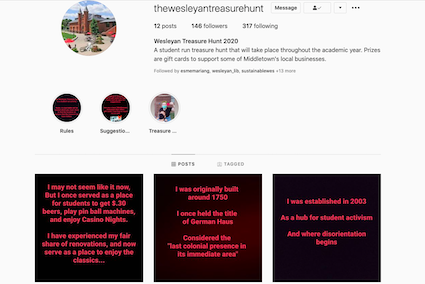 Have you ever wished for secret treasure to be hidden around the University’s campus? Well, the University’s new student-run Instagram page, @thewesleyantreasurehunter, has just made your dreams come true.

This summer, a member of the class of 2021 who wishes to remain anonymous, started the page in order to create a fun activity for their peers.

“So over the summer, I was on campus and I saw that there really wasn’t a lot going on for students who were still here,” the treasure hunt’s organizer said. “And I was fortunate enough to not be hugely affected economically by COVID-19. So I wanted to figure out a way to do something on campus that was safe.”

The structure of the treasure hunt allows for students to safely interact with one another while enjoying a new social activity and a much needed sense of community. Every time a treasure (a gift card from a local business) is hidden, the organizer creates an Instagram post with a short riddle. Participants then must decode the riddle in order to figure out the location of the treasure. Once they determine the location, students must physically go to the location and search for the gift card prize.

With the pandemic and the subsequent screeching halt of the campus social scene, the treasure hunt provides students with a fun and safe activity.

“It has been a really good solo activity because they hide the treasure for you and then you just go there and so it is fun for people to do on your own,” one-time treasure hunt winner Avi Friederich ’22 said. “But I think it would be fun to do together, and safe, because all of the treasure is hidden outside as well.”

While the treasure hunt’s concept is simple, it has not always been so easy to discover the prizes.

“I definitely went through all of the bushes of a building that was just completely unrelated,” Jonesy Moore ’21 said. “There was a meeting in there and they looked up and I made eye contact with them and they were like, ‘What could you possibly be doing?’”

Although the treasure hunt is sometimes difficult, there is always a competitive race to be the first one to find the treasure, which means that each hunt is fairly brief.

While the hunt might be quick, it provides some much-needed stimulation for students.

“It’s something to leave the house for!” Kate Louderback ’21 said.

However, the hunt is not just a form of entertainment; it has also been a way for the organizer to give back to the community. With small businesses struggling now more than ever because of the pandemic, purchasing of gift cards from Middletown establishments has been a way to support the community that gives so much to University students. The organizer has made it their personal duty to sustain the fun initiative as a way to give back to the University and Middletown communities.

“I’ve come out of pocket,” the organizer explained “I think I bought all of them over the summer and I think it was like $150-200. So a decent amount of money. But honestly for me, I saw that as an easy investment as a way to give back, because Wesleyan and the people at Wesleyan have been super supportive to me.”

Not only do the gift cards monetarily benefit local businesses, but they also incentivize University students to enjoy an outing with friends.

“The best is getting the messages from people that have found it, and they are like, ‘This is awesome; now I’m going to go have some pizza at Mondo with some friends,’” the organizer said.

The organizer hopes to continue to hide treasure throughout the rest of the semester, as well as expand their gift card purchases to other establishments and get feedback from participants about their favorite restaurants and stores. One student even suggested asking academic departments to sponsor individual hunts by purchasing gift cards. Departments could create clues related to their major and have students solve them as a way to support local businesses and a student-run organization, while also advertising their department.

Ultimately, it is clear that the treasure hunt is offering a new and exciting reprieve for students. As Louderback said: