Wesleyan Rugby’s Historic Merger: A Sit Down With the People Who Made it Happen 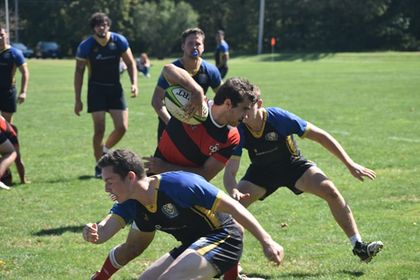 Over the past two years, the men’s and women’s rugby teams have begun the process of merging into one coherent club. The Argus sat down with the women’s club president Terra Ganey ’21, and one of the captains of the men’s team Casimir Fulleylove-Golob ’21, to discuss the new developments, history, and future of Wesleyan Rugby.

A: When did the idea of merging start?

CFG: I was in Italy studying abroad. I can’t remember what really sparked it but I was in Italy twiddling my thumbs trying to figure out what to do with myself, thinking [about] this idea, and I reached out to Terra and Audrey Lamb ’20. It was about a year ago now, almost to the month, almost to the week. I think it was late September or early October.

TG: I just remember getting a call from you [Cas] with the idea. It sounded good to me.

A: Was that your honest-to-God first reaction when you heard it?

TG: I think so. It was more like, ‘We do everything together anyway; do you want to share it?’ So I said sure. The money was being used for balls, water bottles, equipment in general, so it sounded good to me.

A: You mentioned that the teams have always done everything together, can you guys talk about what the relationship between the men’s and women’s teams has looked like historically?

CFG: I think there are two bits of history concerning that. Recent history, which I think goes back three years, and then the history before that, which goes back to the inception of the women’s club. The last three years it’s been quite rosy. Since Terra and I showed up as freshmen, it has become a much closer working relationship where [the] clubs socialize together. I have gone and refereed a few of their games. They are probably the best fan club the men’s team has ever had and ever will have. So it’s been quite tight-knit both on-the-field supporting [each other] and the off-the-field social events.

TG: Before we got here I think the men and women’s teams didn’t get along. The captain my freshman year just didn’t want anything to do with the men’s team because the club in the past had some bad experiences with them. I think Cas can speak more to that. Cas and I together made [it] a goal of ours to bring people together and get past that. It also had to do with people graduating and that energy was no longer around, so we started doing stuff together. We practice together now, most of our social things are together. It’s a community. Rugby is for everybody and we keep it in the family.

CFG: The one term that comes up especially on the men’s side of things, especially in the UK, is ‘rugby lad culture.’ The men’s team suffered from that a reasonable amount when we arrived as freshmen and it took a changing of the guard for that to be ushered out and [for] a new era of culture [to arrive]. It can still retain all the classic banter, it just doesn’t have to be lad culture banter. It can be standard banter; for example, ‘Your socks look kind of crappy!’ Comparing that to the present, Terra mentioned we train together now. The plan for this semester is that the two clubs will officially be training as one under the supervision of Coach Pete Velcofsky to meet the school’s training requirements for the pandemic.

A: So Terra, have you felt that culture shift that Cas is talking about on the men’s team during your time here?

TG: It has been really dramatic. When [our freshman year’s] senior class left and Cas and I rose into ‘power,’ there was a huge shift. We started slowly at first, just doing formals together, then regular social events, but now we will get together and watch a game or hang out on the pitch. There are a lot of people on each half of the club that are good friends now. I think it is a big draw for younger players to have this large community of people they can interact with and not just feel like we are the women’s side and they are the men’s side and we don’t really interact with them. Instead, we are a part of something really awesome.

A: What do you think your two teams respectively bring to one another?

TG: I think it is the community. It felt weird to be divided. [Being one team] it makes you feel [like] part of something larger than your one side. It is the women’s team supporting the men at their matches and the men coming to ours.

CFG: I completely agree. Last fall, the men’s team had an away game at Trinity and members of the women’s team drove up to Trinity to watch the game, and I had never heard of that happening before so the community is a huge part of it. To that point, that really is what rugby is all about. It made absolutely no sense for the two teams to be separate. What rugby has always been about is community. Opposition fans always mingling with each other, sharing beers, there is mutual respect, it doesn’t matter who you are. The next point I would add is that the creation of community has helped us massively with recruitment. Of the men’s team recruits from my year, only 2 of us stuck with it. Last year, once we started doing things together (the men’s and women’s teams), we gained 10 sophomores on the men’s team, which accounts for ten out of twenty-six roster members. I would link that directly to the joint efforts of both teams.

TG: We have had a lot of recruits that come as friends on the men’s side. They can walk to practice together and the field is far away so it helps to have a buddy to go with. I might be the only senior on the women’s side, but the sophomore and junior classes are huge.

A: Is there anything else about this merger that you want to let me know about?

CFG: Going forward, we want to bring this even tighter together. Originally we had our baptism of fire in the fall of sophomore year for us (fall 2018) which was more of the organizational and governmental level, i.e. how we are managing our squads—there was direct consultation with the women’s team on that and how we are dealing with said issues. Going forward, talking about Wesleyan Rugby as a whole, the idea is to have the lead officers for each club form a committee over it all. This would be the presidents and two captains for each side, so six people overall. Even though we have done this merger ourselves, in terms of [the] WSA, we are not officially merged so down the line, the goal is to be recognized as a singular club at Wesleyan.

TG: The last knot to tie is the financial side. Right now the women’s side [is] still recognized by the WSA as being financially dependent on the school, so in order to make this merger official, we have to get off of that. The men’s club is recognized as funded from an outside organization.

CFG: Also on that level, we’ve created a joint alumni board of directors to help reach out to alumni for fundraising. We spent a long time reaching out to women’s club alumni. We actually have an ex-USA rugby sevens Eagle on the board, Jenna Flateman Posner ’04, who is a Wes alum. Through the board, we are hoping to have a diversification of who we can reach out to in the future for advice and financial support.

TG: The problem is that the women’s club is just a lot younger, so our alumni network is just not as deep. We don’t have the years and years of old rosters to go through.

CFG: That is something hopefully we are creating here, that community aspect where people will say like, ‘Heck, that’s something I thoroughly enjoyed and I want other people going through Wesleyan to have that same support network and experience.’ Terra and I have also talked about how we don’t want to do our four years and be done with it. For both of us, what has been important is making sure there is a plan going forward.

TG: It is rewarding to see the work we put in manifest in the depth of the roster organizing stuff on their own accord or even toss a ball on Foss. It is really rewarding to see that happen. Hopefully, that will continue after we leave.