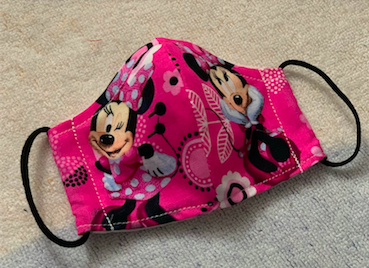 During the pandemic, buying and wearing masks has become a common practice. For Odrimelissa Marmol, the pandemic has presented an opportunity to make an impact.

Marmol, a custodial worker who has been employed at the University for nearly 13 years, has spent the past several months hand-making masks for her community. When COVID-19 first hit Connecticut, she knew many people who did not own masks or could not buy one.

Seeing the needs of those around her, Marmol sprang into action. The first mask she made was for the son of a co-worker during the University’s spring break, right after the University announced it would transition to remote learning.

“I looked for a piece of fabric, made the design, and I made her son a mask,” Marmol said. “I told her that I hoped it would help her son.”

What started as a one-time project during a day off quickly became an effort to support her colleagues and family members.

“When I started to listen [to the news], all I said was ‘wow, this is something serious,’” Marmol explained. “This is going to be something permanent.”

Marmol said she originally sewed the masks by hand. She explained that this initial process was time-consuming and taxing, but the only option at the time due to restrictions imposed by the pandemic.

“Everything was difficult because the stores were closed, the fabrics, the machines were sold out everywhere,” Marmol said.

She spent hours hand-creating masks for her loved ones and co-workers. As the pandemic worsened and the demand for masks intensified, Marmol was luckily able to attain a sewing machine from her mother-in-law, which ultimately sped up her process.

“When my mother-in-law lent me the sewing machine I had no experience sewing [on one],” Marmol said. “I had to search YouTube videos to learn how to assemble the machine and how to use [it].”

At this point, Marmol’s project transformed from a hobby into a full-fledged business.

“I began to put [pictures] on my Instagram and Facebook pages,” Marmol said. “People started to communicate with me, to ask me how much the cost [was], to say they were interested in buying [the masks]. But really, my coworkers were the most support that I had at the beginning.”

In fact, Marmol’s co-workers have been her biggest—and most loyal—customers throughout her business venture.

“I’m the only one who sews, but they have supported me in the business ever since I gave a mask to each one of them,” Marmol said. “They started to order masks for each of their families.”

Since the launching of the business, Marmol’s sales have expanded far beyond the state of Connecticut.

“I’ve had sales from Miami, Texas, California,” Marmol said. “People from many places have bought them, but now also, with the return of you [students], one woman from here, a student, posted my mask [on social media], and it has gone much, much better. I am very grateful for all of that.”

Marmol said that her job at the University has gotten busier with the return of students. Not only does she work during the day, but she also has numerous mask orders to fill during her free time. When the pandemic struck, Marmol says she ended up working less, but her job has picked back up this fall with COVID-19 cleaning measures.

“[Now]… the disinfection and the cleaning always have to be done, to make sure that no one gets sick,” Marmol explained.

The extra money brought in by the masks has been extremely helpful for Marmol and her family.

“I have my sister that lives in the Dominican Republic, so with the virus over there, everything shut down,” Marmol said. “She [practically] lost her job, and I have been supporting her with that money, helping her and my niece with rent and food.”

Marmol is grateful for how well the business has done.

“I’m going to continue making masks as long as I can, until everything moves on because really, I enjoy it,” Marmol said. “It’s something that I do in my free time and that helps me de-stress.”

Marmol says she’s beyond appreciative to her customers.

“I just want to give thanks for the support that my friends, my coworkers and all of you have brought me,” she said.

If you are interested in purchasing a mask from Odrimelissa Marmol, text her at 860-839-3801 for more details. Each mask is custom-made and costs around $15.
The interview with Odrimelissa Marmol was conducted in Spanish and translated by Emma Smith.