Class of ‘24 Adjusts to College Amidst Pandemic 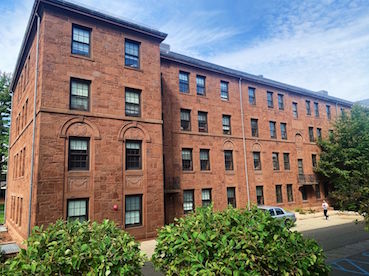 This year has been one long experiment in uncertainty and adaptation. For first-years arriving on campus, the start to college was yet another item on the list of experiences that did not go as planned due to the pandemic.

Not only was the move-in process spread out over the course of an entire week, but immediately after arriving on campus, students began a two-week quarantine period. Now that those two weeks have passed, many members of the Class of 2024 have begun reflecting on their unconventional start to college.

“The Wes community has been really great and supportive,” Sammie Mosk ’24, said. “I am always seeing my friends who go to other colleges and universities out partying and hanging out in large groups without masks, and that honestly scares me. I am glad that even though Wes has very strict rules, the majority of people are following [them], and we are still making the best out of a not-so-great situation.”

Jack Gardner ’24, an international student from Hong Kong, cited the University’s COVID-19 safety measures as one of the main factors that influenced his decision to come to campus.

“It’s really something that I felt confident that Wesleyan has a handle on,” Gardner said. “I know that some of my other international school friends are doing remote learning at home, and they haven’t come to the U.S.”

After arriving in the United States after a 15-hour flight, Gardner says his campus transition has gone smoothly.

“During this time, it is very reassuring to me because you really get to know the measure of a community when it’s under stress,” Gardner said. “And we’re certainly under stress now, and it’s still a good community. So I’m sure that when the pandemic is over, it’ll still be.”

However, the adjustment to college has not been as smooth for other students as it has been for Gardner.

For Cameron Scott ’24, an international student from Ghana, the process was quite difficult to navigate, especially after arriving at the University after spending nearly 24 hours on an airplane.

“Everyone else was moving in with their parents or was really prepared, but I had to rush to get everything ready,” Scott said. “So when I got here, I just had nothing. I didn’t even have sheets for a while, and I had to order them.”

Many first-years spoke to a host of different reasons for coming to the University this fall.

Alexandra Weidenfeld ’24 said that she was eager to leave home after returning from her gap year.

“I needed to get away from home and I needed to live in a new environment with a different headspace,” Weidenfeld said. “I really felt like I needed to come to campus so I could…start living my own life and creating my own narrative.”

For many students, money was the deciding factor in their choice to come to campus.

Vincent Langan ’24 cited financial considerations as a challenge, personally fearing that taking a year’s absence might jeopardize his financial aid.

“This is a good price tag for my family right now,” Langan said. “I don’t want to alter that in any way. But also at the same time, all my friends were going, and I didn’t want to be a step behind.”

Lance Barnard ’24, who received a full-ride scholarship to the University, decided to come to campus to experience the University in-person.

“Mostly just to get out of the place I was in,” Barnard said. “So I have a full-ride scholarship here so I worked my ass off to get $85,000 a year to go to this place, and by God damn, I’m going to go here and see what it’s actually like! So that was part of the motivation as well.”

However, upon coming to campus, many students mourned the loss of community interactions.

“That community feeling feels absent,” Annie Ezzell ’24, said. “It seems like we’re all in our own little learning bubbles.” 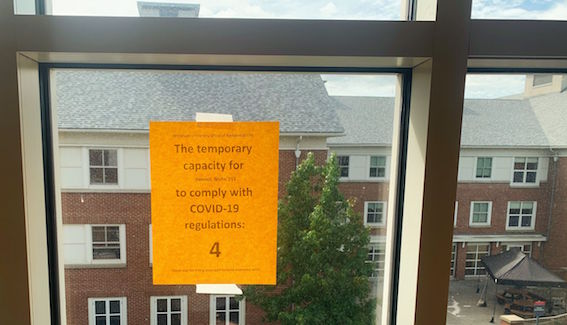 While also voicing feelings of isolation, Langan affirmed the collective importance of abiding by COVID-19 safety measures and being mindful of other students’ disproportionate need to be in a safe campus environment.

“At the same time I felt that it was so much bigger than me…like this is an entire campus [with] some people who really need to be on campus,” Langan said. “And I respect that, so I really think it’s important for me to be in my room and for us to all be taking the necessary precautions.”

“There’s a lot at stake for not following the rules,” Weidenfeld said. “It’s not about following the rules or not, it’s about keeping the community safe. It’s about building a community where people trust each other, and people who rely on being on campus can safely be here and exist…. I want to stay on campus, but I think there are larger goals and more important goals than the college experience.”

For many students, abiding by COVID-19 safety measures adopts a new level of importance as they would be disproportionately affected if the campus were to shut down.

“I’m more fortunate than I used to be,” Barnard said. “I do have a somewhat stable place to go back to, but the biggest problem for me would be the getting back part because I do know that they would give us a very short time frame in which to pack our stuff and leave if they were closing campus, and that might not be necessarily possible for me to do, and also make it to where I need to go. Like give it a couple of months ago, if this had happened, I wouldn’t have a place to go at all.”

While the move-in experience, coupled with the campus’ mandatory two-week quarantine, has certainly detracted from many of the typical coming-to-college rites of passage, many first-years have bonded over the changes.

“Everyone has this shared reality currently like every single freshman is in the same boat…and even if you are more social or less social, you will have a common talking point,” Daniella Porras ’24 said.

“I really vibe with this idea of togetherness, like we’re all taking this step together,” Langan said. “We’re all experiencing the same things together—I think there’s a lot of profundity in that.”