Pouring Into Myself: Two Performers Dream Alone in “A Milk Kind of Play” 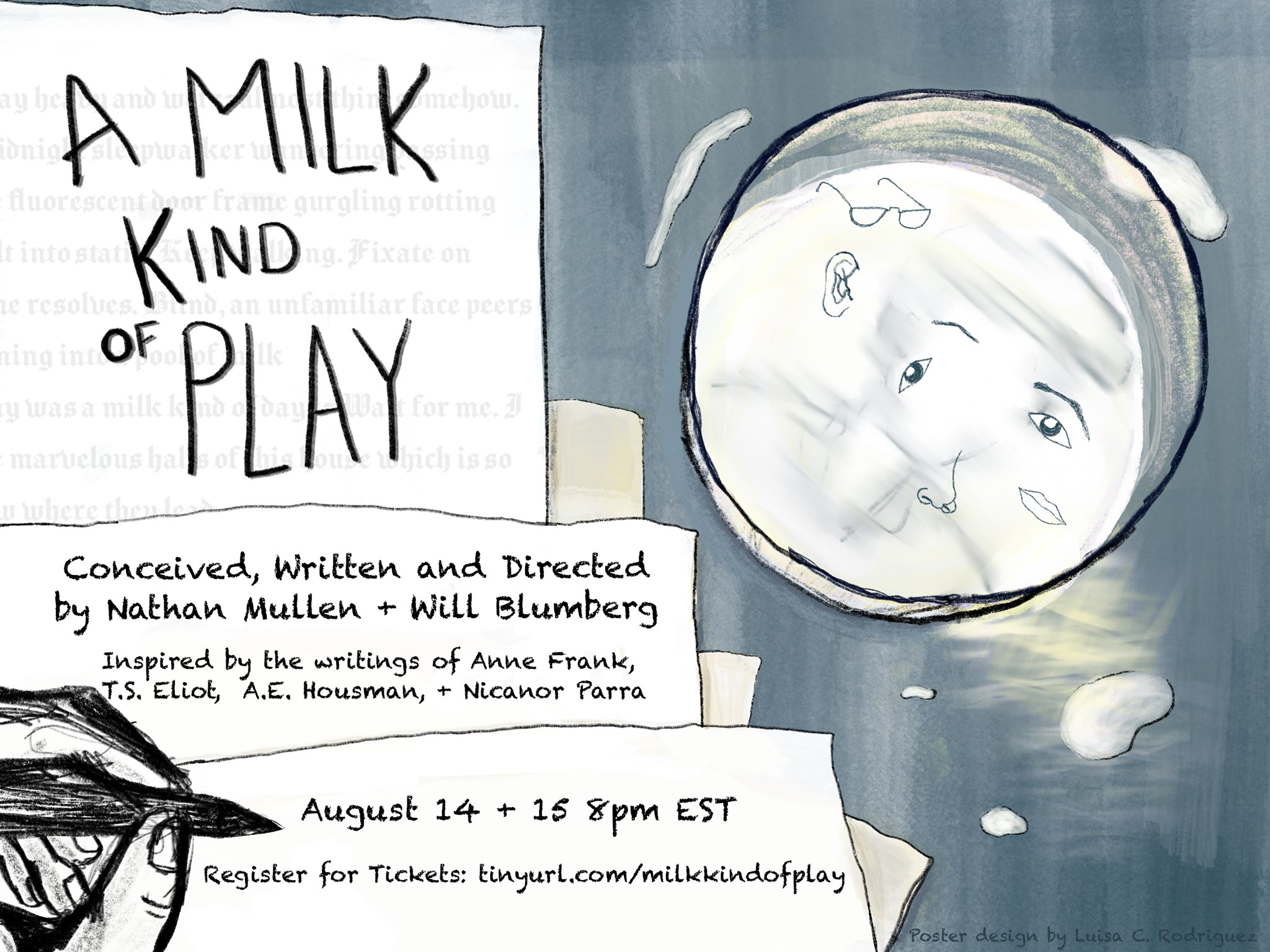 “Without placing judgment on yourself or your thoughts, what is one thing you can do to make a necessary change in your life?”

When I was confronted with this question in late August, I didn’t know how to respond. After six months of quarantine, my life had seemingly become an endless monotony of staying in my house — a refuge as the world burned — quite literally on the West Coast. It became hard to track any sense of change. Days blurred into nights. Weekdays blurred into weekends. Months seemed to pass with hardly any distinction between them besides for the accelerating death numbers — from both racism and the pandemic — I watched on the news. When my mom would ask me, “What did you even do today?” at dinner; I’d stare down at my dinner plate like an ashamed toddler.

Things got worse. My mental and physical health deteriorated, seemingly by my own accord. Chaos reigned in my mind as my body remained stuck in bed.

My bubble of self-destruction eventually ruptured. After a month of intense hospitalization, I can now name a few “things I could do to make a necessary change in my life.” I can call a friend and hang onto the sound of their voice. I can walk down the street and see the sunlight coming through the trees. I can listen to the cicadas in my backyard, chirping for hours and hours, singing a melody both haunting and familiar. Of course, those things seem hardly transformative or even necessary. But they’re all that I have right now.

I encountered this question in the extended prologue of “A Milk Kind of Play,” a virtual performance that premiered Aug. 14-15, 2020. Devised by Nathan Mullen ’20 and Will Blumberg ’21 (with dramaturgy and stage management by Esmé Ng ’22), “A Milk Kind of Play” opens with a ten-minute meditation, asking its audience to attune their attention to a slower, quieter frequency. A Voice (Ng) guides the audience through grounding techniques as we watch a small figure walk to a dock from very far away. This is underscored by a synth humming, designed by Dylan Shumway ’21 and Gabriel Ballard ’21, that slowly rises in pitch.

The sustained length of this meditation — the repetition of the lines fluctuating between tranquil and maddening — prepares the audience for an uncomfortable but honest look at what survival as social distancing looks like in 2020, when being physically alone all the time is not easy or fun, but is necessary for change.

The show unfolds in a series of vignettes, each one embracing the limitations of Zoom live performance by always acknowledging the fact that characters are speaking into their computers. The Writer (Mullen) seems emotionally and mentally stuck in a monotonous cycle of self-criticism, having strictly quarantined himself in his house.

“I often believe I’m on the precipice of something unknown, unseen, something that I was promised,” Mullen wearily confesses. “But then I feel the world slow, I feel it skid to a stop. Even sugar is not sweet anymore. It spoiled, curdled into sand, dried into salt.”

The Writer seems trapped between the global, existential threat against humanity that COVID-19 poses and the mundane frustrations it has caused in daily, isolated life. He wants to get a haircut and to hold someone’s hand, while also not being able to stop thinking about the mass graves created for unclaimed, virus-ridden bodies.

The Writer’s only communication with the outside world arrives through a trio of different characters (Friend, Therapist, Poem) all portrayed by Blumberg. He meets the Friend online for the first time in March, and the two skip the quagmire of small talk, speaking honestly about their new lives. He has regular meetings with the Therapist, who offers practical suggestions to alleviate the Writer’s anxieties. But the most mysterious interactions are with an unnamed figure who seems to be moving down a hallway’s ceiling, who only arrives when the Writer starts reading his poetry. Over the course of the show, we slowly realize this figure is a poem itself personified: the fragmented creation from a mind that barely coheres.

What unites the trio of characters that Blumberg portrays is the fact that they all challenge the Writer’s pessimism, whether playfully or cruelly. The Therapist offers the most practical advice, but is ultimately ineffective at helping his patient. The bureaucratic stiffness of Blumberg’s performance, while talking about intensely emotional issues, offers an astute critique of the health care system. But occasionally the mundane parts of their conversations stumble into something profound, like when the Therapist asks the Writer how his days are going.

“Today was a milk kind of day,” the Writer responds. “It was heavy and wet, but also somehow thin. Like throughout the day I have things to do and reasons for doing them, and I enjoy most of them, but in the end, when I look back it’s all just milk.” The therapist, sticking to an assigned list of platitudes, doesn’t know how to react to a metaphor so strange and potentially disturbing.

More receptive to these long discussions is the Friend, who sees the quarantine as a wide-open space for self-improvement. He jokes about the Writer’s use of literary words, lightly chastises him for relying on coffee to get through the day, and tackles the challenges of his everyday life with a growth mindset. In the Friend’s mind, social distancing sucks, but is also an opportunity; he struggles, however, to get the Writer to embrace the possibilities of their situation.

However, some fundamental differences between the Writer and the Friend start getting in the way of their friendship. While the Friend wants to meet up and engage with others in a socially distant way, the Writer thinks that that behavior is unconditionally wrong (he reveals his mother is a nurse). Blumberg and Mullen deftly dramatize the ethical choices that the pandemic forces us all to make: we must do only what is necessary for survival, but isn’t seeing others part of surviving?

The two actors often both lay in their two different beds, simulating a kind of physical closeness that is in such short supply for college-aged people.

I’m reminded of the times I’ve texted people, “I want to put my head on your shoulder” or “I wish I could hold you.” Deprived of any embodied sensation, I am left whispering my desires into the phone like someone reading italicized stage directions for intimacy.

Questions of identity also fascinatingly come into play with the friends’ discussions, such as when the Writer wonders which is more authentic: himself on Zoom or himself “in real life?” Often the cameras of the show would remain on the actors after they had finished their “zoom meetings,” letting the audience watch their expressions turn from false kindness to dread. Although the play offers no conclusive answers to this question of identity, the show itself proves that we are always performing, even if just to prove our worth to ourselves.

Internal conversations within a conflicted mind take center stage when The Writer is confronted by his own writing in the form of The Poem. The Writer disparages his creation, thinking it self-absorbed and unable to rise to the occasion of isolation. But The Poem is much more generous to him, asking him to acknowledge his cognitive distortions but not let them control him.

The final section of “A Milk Kind of Play” dares to imagine the future, and it’s pretty bleak. “A Milk Kind of Play” offers an ambiguous speculation, showing how in Mar., 2021, the Writer and the Friend are still in lockdown, frustrated with their relationship more than ever, both on the verge of tears. When the frustrated Writer returns to the Poem, he is confronted with a repudiation of his pessimistic beliefs with a litany of his privileges. The Writer benefits from the labor of thousands of essential workers. He is irrevocably connected to all corners of the world.

The Poem pushes the Writer toward the way of grace and gratitude, of appreciation for the mere fact of our existence. While this thorough counter to the Writer’s nihilistic worldview feels revelatory in the moment, its promises ring hollow to me now, with some time passed since I watched the play. I want to fill my life with gratitude, to appreciate the grass and the stars and the leaves and have that be enough. But there are times when radical acceptance slowly rots into resignation or willful ignorance. The push toward unwavering gratitude no matter the situation allows people to ignore systematic oppression and place the blame on their own actions. Why suffer when it’s up to you to smile? Don’t think about the huge forces that led to your suffering in the first place.

“Suffering is not relative, it is absolute,” writes Zadie Smith so beautifully in her new book “Intimations.” “Suffering has an absolute relation to the suffering individual — it cannot be easily mediated by a third term like ‘privilege.’ If it could, the CEO’s daughter would never starve herself, nor the movie idol ever put a bullet in his own brain.”

If suffering is absolute for the writer, maybe a true path forward would be to carry both his gratitude and suffering, without demeaning either one. It’s a much more difficult challenge than what the poem seems to be advocating (a conclusion it seems like the playwrights are supporting). But it’s also one that’s more complex and fluid, like the rest of “A Milk Kind of Play” itself. The show is best when it avoids any kinds of positive messaging in favor of the nuanced, murky depths of its protagonist, and of milk itself.

With milk comes all kinds of associations: the Milky Way, spilled milk as a mistake you can’t cry about, maternity, infancy, childhood, adolescence (as when James Dean drinks a glass of milk in “Rebel Without a Cause”), and promised lands (“milk and honey”). All of these creamy, dream-like, and unabashedly white. I’d be interested to see what concoctions writers of color would create following the same devising process. Would “A Lemonade Kind of Play” emerge from Black writers following in the lead of Beyoncé, the sweat of their labor reclaimed into sweet juices? Or would they create a show more like Mista’s “Blackberry Molasses:” slow, oozing, and full of brown matters congealing together?

“A Milk Kind of Play,” which itself is an ongoing devised project, might have the capacity to engage in these modes of thinking in the future. But what makes the show so special is its unique snapshot of a few people struggling a particular time and place. The play’s formal abstractness and mixed feelings are fitting for a world that is still in the middle of a global upheaval: the work is not done just yet.

The future does not seem like it’s going to get better anytime soon. Red and orange skies seem to radiate from the West Coast. Hurricanes ravage the Caribbean. Black men and women die at the hands of policemen, and the government doesn’t seem to care at all. Children live on their phones and computers, stripped of human contact. The earth sags, dragging its fractured soil around the sun.

But to imagine a future for ourselves — to pick up the phone and call someone to make plans from a distance — might just be the necessary change we need. If we can be like the characters in “A Milk Kind of Play,” we can listen to each others’ suffering, and not try to minimize the suffering of others. We can change our perspective to see the ways in which we’re doing our best to ethically navigate increasingly impossible circumstances. Imagining this better future is how we keep going. It’s how we survive.