In Reaction to Djokovic’s Outburst, Tennis Reveals its Racial and Gender Hypocrisy 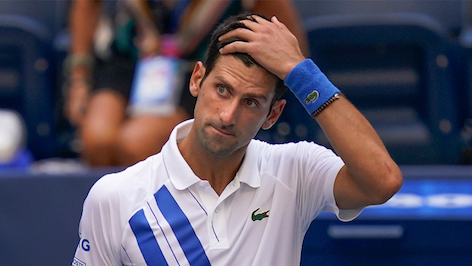 Like so many other events in 2020, the U.S. Open was bound to be unusual. The usual hoards of enthusiastic fans are absent from the USTA Billie Jean King National Tennis Center, and stringent testing, sanitization, and physical distancing protocols are in place. Several key players, including Roger Federer and Rafael Nadal, opted out of the tournament, which left world number one Novak Djokovic as the clear favorite to win the men’s singles draw without the usual competition from Federer and Nadal.

Djokovic’s plans to conquer the tournament were abruptly cut short when he was disqualified from his match against Pablo Carreño Busta on Sunday, Sept. 6. The disqualification occurred when, after falling behind 5–6 in the first set, he angrily hit a ball towards the back of the court, striking a linesperson in the throat and causing her to collapse and gasp for air.

After 10 minutes of deliberation, the supervisor, chair umpire, and tournament referee concluded that the match was over, much to Djokovic’s dismay.

According to tennis writer Ben Rothenberg, Djokovic downplayed the effect of the linesperson’s injuries and excused his poor conduct.

“You’re going to choose a default in this situation? My career, Grand Slam, center stage,” Djokovic said, according to Rothenberg’s tweet.

The United States Tennis Association put out the following statement after Djokovic was disqualified:

“In accordance with the Grand Slam rulebook, following his actions of intentionally hitting a ball dangerously or recklessly within the court or hitting a ball with negligent disregard of the consequences, the U.S. Open tournament referee defaulted Novak Djokovic from the 2020 U.S. Open. Because he was defaulted, Djokovic will lose all ranking points earned at the U.S. Open and will be fined the prize money won at the tournament in addition to any or all fines levied with respect to the offending incident.”

Although the hit was unintentional—one could clearly see the look of horror and regret that crossed Djokovic’s face when he realized what he’d done—it adds to a persistent pattern of poor behavior by Djokovic, particularly in recent months.

Earlier this summer, he came under fire for organizing the Adria Tour, a tennis tournament in Serbia and Croatia that resulted in several COVID-19 cases (two of which were Djokovic and his wife, Jelena). The tournament lacked serious social distancing precautions. Fans, mostly unmasked, crowded the stands, and players were hugging and shaking hands frequently. Reports also emerged about several tournament participants flagrantly partying at a Belgrade nightclub.

In general, Djokovic’s disqualification from the US Open was met with severe disappointment and anger from many of his fans. Images traveled around on the internet of Djokovic appearing to kindly check in on the woman he hit. A New York Post headline reads, “Novak Djokovic’s Excessive Punishment is Terrible for the U.S. Open.”

After Djokovic posted on Instagram expressing his regret and sadness about the day’s events, a host of commenters jumped to support him, many of them insulting the linesperson’s “overreaction.” He then posted a follow-up, asking his fans to remember that the linesperson has “done nothing wrong at all”;  one commenter responded, in all caps, “NOTHING HAPPENED TO HER AND IT WAS AN ACCIDENT AND YOU ARE THE KING.”

This event and the media’s reaction to it are particularly galling in the context of the other U.S. Open controversies that have emerged in recent years involving Serena Williams. In the finals of the 2018 U.S. Open, Williams was penalized after chair umpire Carlos Ramos called a code violation for coaching. The situation escalated as Williams disputed the call and continued to defend herself (coaches react and gesture to players all the time in Grand Slam matches and it is rarely contested). Several code violations later, including one for verbal abuse, Williams was forced to give up a game, leaving her trailing in the second set. Naomi Osaka tearfully accepted her first Grand Slam title after winning the match, and the media went ballistic—on Williams.

The New York Post published a headline that read “Serena Acted like a Sore Loser.” Images circulated of Williams in poses that presented her as particularly dramatic or aggressive. Her behavior was called an “epic tantrum” and she was called a “diva brat” by Spectator USA.

“It wasn’t about her being [Black], or a woman, or a mother,” Freddy Gray wrote in the Spectator article.

But it was about that. And this was made clear in the vast difference between the media’s reaction to Djokovic’s disqualification and their reaction to Williams’ game penalty. For a white man, blatantly breaking a rule and injuring an official means public sympathy. For a Black woman, arguing about getting called for unfair technicalities that don’t apply to anyone else makes you a brat.

Throughout her entire career, Williams has faced disgusting displays of racism and sexism. The media has constantly nullified her success, criticized her body, and insulted her on-court demeanor, using racist and sexist rhetoric to describe her and her sister, Venus. She’s never accepted these attacks; she’s fought back, just as she did when Ramos robbed her of a game in the 2018 final against Osaka.

After the game, she demanded an apology from Ramos.

“For me to say ‘thief’ and for him to take a game, it made me feel like it was a sexist remark,” she said. “He’s never taken a game from a man because they said ‘thief.’ The fact that I have to go through this is just an example for the next person that has emotions, and that wants to express themselves, and they want to be a strong woman….”

In contrast, when Novak Djokovic had a moment of frustration, it became a great tragedy for him and his career. Hardly anyone thought about the implications for Williams’ career; instead, it was all about her aggression, her poor sportsmanship, her “tantrum.”

“Perhaps this is how racism feels no matter the context—randomly the rules everyone else gets to play by no longer apply to you and to call this out…is to be called insane, crass, crazy,” Claudia Rankine wrote of Williams in “Citizen: An American Lyric.”

Ultimately, with Djokovic, the rules were the rules; his default was necessary. But the sympathetic explosion of the media following his default, compared with past reactions to Serena Williams’s controversies, reveals the deeply problematic undertones of how people continue to disparage female athletes of color while defending and championing white men.