Three-hundred seventy-four Middletown residents have tested positive for the disease caused by the novel coronavirus (COVID-19), Connecticut Governor Ned Lamont announced on Thursday, May 7. There have been 50 COVID-19 related fatalities in the city, and 45 people have been hospitalized because of the disease, according to Middletown Mayor Ben Florsheim ’14.

Lamont reported that 1,385 patients in Connecticut are currently hospitalized because of COVID-19, 60 fewer than on May 6. The decreasing number of hospitalizations keeps the state on track to meet reopening criteria and allow certain businesses to reopen on May 20.

“Our three-day moving average on hospitalizations continues to trend down, and that means that keeps our May 20th planning date intact and what we plan to do going on this summer,” Lamont said at his May 6 briefing.

In a Facebook video on May 1, Middletown Mayor Ben Florsheim ’14 addressed the differing trends in hospitalizations between the state and Middlesex County.

Florsheim emphasized the importance of looking to hospitalizations as plans for reopening are being discussed in the state.

“That’s the number that we’re really looking to as we try to determine what a reopening strategy is going to look like,” Florsheim said. “So even though the overall trend statewide has been a decline, in Middlesex, we’re kind of—I would call it neutral, over the past week or so—and we’ll continue to watch that very carefully.”

Following Lamont’s announcement on April 29 that the state was urging local governments to create long-term recovery committees, Florsheim said that Middletown was prepared to coordinate recovery efforts at the local level.

“The good news for Middletown is we already have a really strong structure for a group like that in place,” Florsheim said. “We’ve been meeting regularly, starting out every single day. We’re now doing it three times a week with a huge cross section of community stakeholders, from the Chamber [of Commerce] to some of our nonprofit providers to various city departments, first responders, faith organizations, to make sure that we all know what everybody else is doing, make sure that we are all on the same page about how we’re responding to this…. So we’re going to start in the next few days putting together that coalition who can provide hyperlocal guidance to businesses, to organizations on what that reopening is going to look like here in Middletown.”

During the Middletown Common Council meeting on Monday, May 4, council members unanimously agreed to allocate $439,895 in Community Block Development Grants to support the city’s small businesses as they recover from the economic devastation caused by COVID-19. According to the Middletown Press, $156,000 will be re-allocated from the city’s budget to create $10,000 bridge loans to be offered to small businesses.

The Common Council also allocated $283,000 from the Department of Housing and Urban Development for various grants and programs to help boost the city’s economy.

On May 7, Lamont elaborated on the seven criteria Connecticut must meet before the state is able to begin easing social distancing regulations that he announced on April 30. These criteria include a 14-day decrease in COVID-19 hospitalizations, which Connecticut has now achieved. The state is now working towards increasing testing and contract tracing capacity by finding partners for sample collection and laboratory processing, working with suppliers to ensure test kit availability, rolling out the pilot contact tracing system (ContaCT) to 20 local health departments next week, and recruiting and training volunteers, according to Lamont. 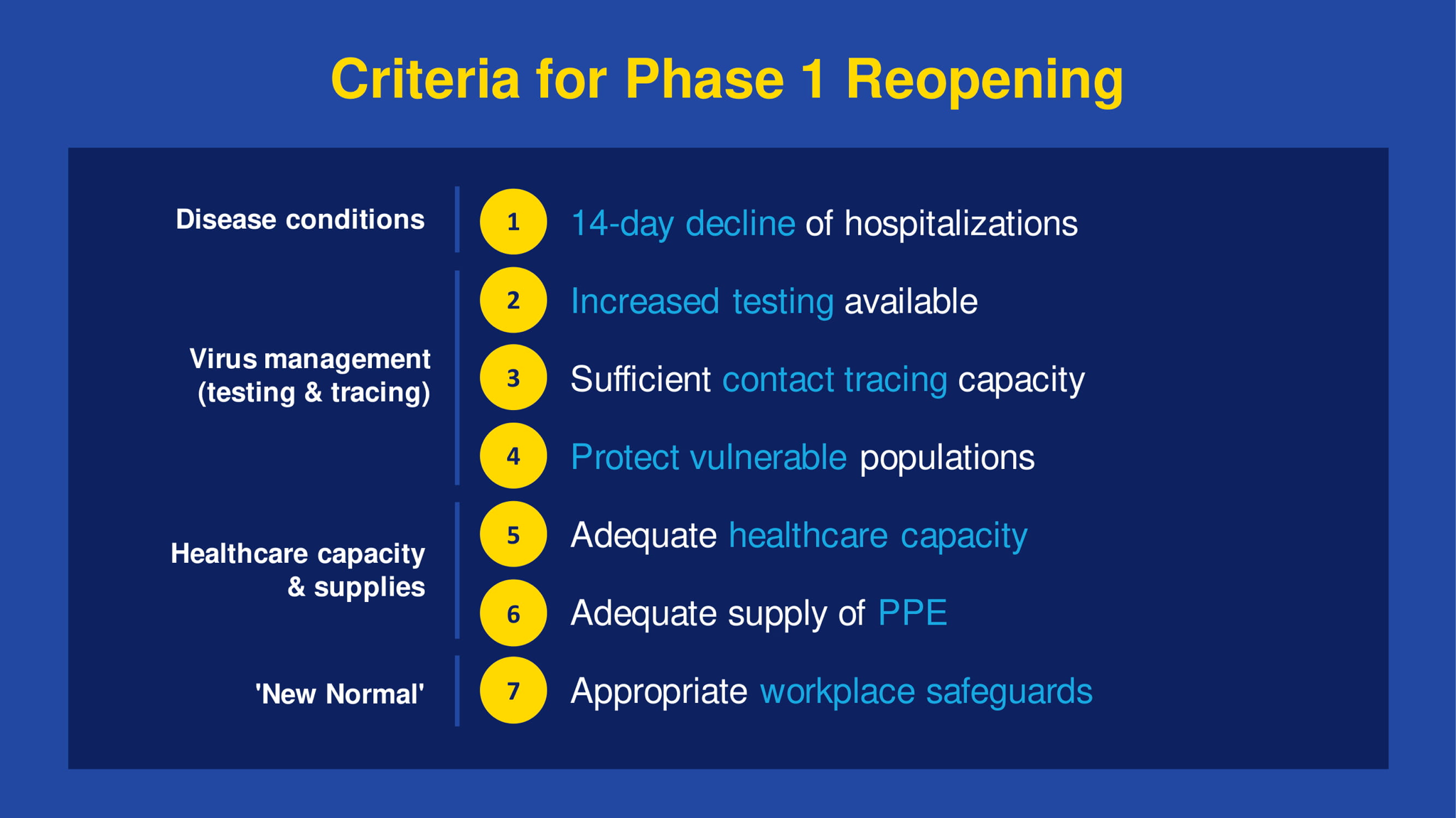 On May 6, Lamont announced that he had received recommendations on a phased reopening of Connecticut colleges and universities from the education committee of the Reopen Connecticut Advisory Group. After meeting certain conditions, the sequence of reopening would allow research programs to open on May 20 as part of the first wave of business reopenings in the state, nonresidential programs to reopen throughout the summer, and undergraduate residential institutions to reopen by the end of the summer if they choose.

Lamont addressed the recommendations during his briefing that day.

“Education is so key to our state—it’s a $10 billion industry, about 45,000 people work in higher education, almost 200,000 students,” Lamont said. “It is important as an economic driver, and it’s also key to the future of our state and our country to keep the best education system in the world led by our higher education going and going strong.”

Conditions for this process include adequate supplies of diagnostic tests for students, faculty, and staff, capacity for contact tracing, and supplies of personal protective equipment (PPE) and face masks. The recommendations also call for 200,000 to 300,000 tests to be available for Connecticut campuses by late August or early September if all residential colleges and boarding schools were to open in the fall. Former President of Yale University and Co-Chair of the Reopen Connecticut Advisory Group Education Committee Member Rick Levin addressed this estimate during Lamont’s briefing.

“For residential institutions, we are recommending a screening of everyone, testing of everyone when they come in the fall and isolating those who test positive, and then depending on what the public health thinking is at that time, there may even be a second round of tests,” Levin said. “And then some more random screening during the course of the year.”

Levin emphasized at the briefing that institutions should remain flexible while planning for the fall semester.

“One thing that must be kept in mind is this situation is fluid,” Levin said. “We don’t know today whether the gating conditions will be met in time for a full reopening of campuses in the fall. In particular, we don’t know if prevailing health conditions will stay safe enough to warrant reopening. If there’s a rise in hospitalizations during the course of the summer, any kind of second wave, the governor may well declare that the various phases have to be delayed and reopening will not be possible. So schools need to be flexible—they need to be ready to open, but they also need to be ready to move online if absolutely necessary.”

Lamont announced on May 5 that in-person classes at the state’s K-12 public schools would be cancelled for the rest of the school year and ordered schools to continue providing distance learning and meals to children under school lunch and breakfast programs or the remainder.

“I know how important it is for so many students and teachers to finish out the school year, and I was holding out hope—particularly for high school seniors—that we’d at least be able to complete the final few weeks, but given the current circumstances and to protect everyone’s safety, it has become clear that it’s just not possible,” Lamont said. “I want to thank the many educators across our state who have stepped up to provide remote learning during this time, as well as the many staff members who’ve been putting thousands of meals together for students each and every day.”

Along with the governors of New York, New Jersey, Massachusetts, Rhode Island, Pennsylvania, and Delaware, Lamont announced a joint multi-state agreement for a regional supply chain of PPE on May 3. The partnership will allow the states to identify the region’s needs for supplies and coordinate policies on individual states’ inventories of PPE.