Lentil Soup for the Soul

Lentils, whether they’re red, black, brown, or green, are all delicious. There’s something about the unique consistency of these flavor absorbing beans that’s undeniably satisfying. Out of my own dire need for a fix of such delectability, I made a large lentil soup last night that blew my socks off. What’s more, the leftovers can be frozen for months; mine are now securely stored in an undisclosed climate-controlled location to be used later this week in other pasta and meat dishes. Lentils are high in both protein and fiber, so why not indulge? The ingredients I use in this recipe can all be found at your local grocery store, it’s gluten free, and can easily be made vegetarian. This dish is an easy introduction to soup-making in general. 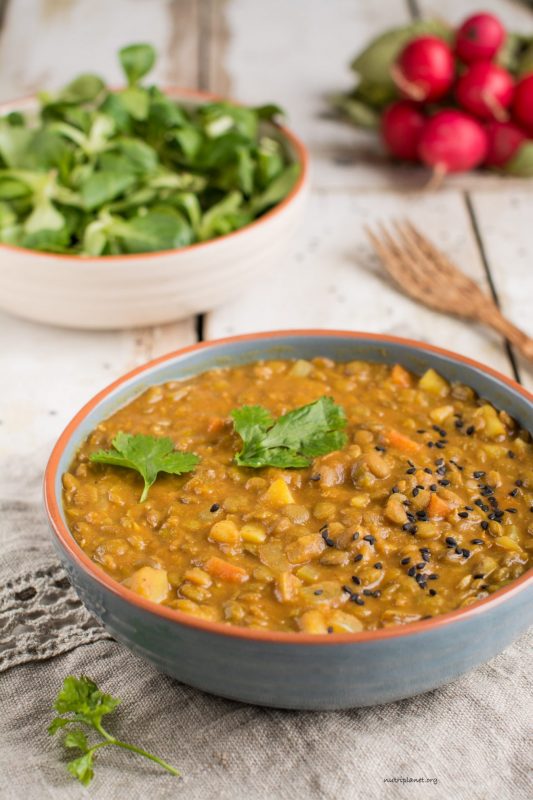 We’re first going to fry some of the ingredients then add in the liquids and lentils—which will absorb as the soup simmers down to the preferred consistency. Let’s start with the prep work; I like to play music for this, the most meditative part of cooking. So, open Spotify and get your jam on! Rinse the celery, cut off the white end, and cut each stick in half lengthwise. Then, chop them into small pieces, like what you’d want in your salad. Set aside the celery and peel the carrots before cutting off the back ends and cutting them in half down their lengths and chopping them just as you did the celery. Peel the onions and cut off the ends before cutting them in half. Then lay the halves face down and cut them into thirds; turn the onion 90 degrees and cut once more. We want small onions because they usually have more flavor than the larger ones; it’s not always easy to keep vibrant flavors in such a large soup. Finally, peel and finely chop the garlic and, if you wish, add diced bacon strips.

Now, we’re ready to cook! You’re going to need the biggest pot you have for this; begin by heating to 4 if electric, or medium-low heat if you have a gas stove. For those using bacon, begin by frying those little bits to perfection. If you aren’t adding bacon, add some olive oil to the bottom of the pot. Once the bacon is cooked or the oil is hot, put in the onions and let them sweat until they begin to soften, at which point you can push them to the sides of the pot, leaving room to fry your garlic. Drop a little more oil in the center of your pot, and put in the garlic. Once the garlic has fried just enough to give off its incredible smell, drop in the celery and carrots then stir vigorously. Let it all cook for a couple minutes while you go wash the tomatoes, cut out the cores, and slice them into wedges.

After a few minutes of conscientious stirring, throw in the tomatoes and pour in the water and vegetable or chicken stock. Add in all of the lentils and make sure to stir the pot so that they’re not all stuck together at the bottom. Place two bay leaves in the soup and turn the heat up enough to get the whole thing boiling. Once it begins to boil, stir the soup and turn down the heat all the way to 2-3, or low heat. Now begins the critical simmering process where the lentils cook and absorb all the delicious flavors you put in the dish. You’ll be stirring it every few minutes to make sure the lentils don’t burn at the bottom, but it mostly just needs time to do its thing. After an hour and a half, the lentils should be cooked, and you can begin tasting the soup and adding additional flavors to taste. I like to put in a little cayenne pepper so that there’s a bit of a kick to it, and you can add salt quite liberally, just make sure to taste the soup so you don’t go overboard. Once the lentils are cooked, it’s technically ready to eat, but depending on your preferred soup consistency, you could leave it to simmer longer.

Sometimes, cooking and eating are the best ways to escape difficult realities; while these shouldn’t be our sole coping mechanisms, they’re an important tool in our arsenal.