On March 17, Wesleyan’s Center for the Arts (CFA) began its first ever Virtual Residency program, featuring the work of dancer, choreographer, and interdisciplinary artist Eiko Otake, alongside contributions from some of her many collaborators. Eiko, who uses her first name professionally, has a long history with the University and has frequently performed on campus and taught classes.

Allison Hsu ’19, Eiko’s former student and current assistant, has worked closely with her and the CFA to create this virtual studio. Prior to the CFA’s invitation, Hsu and Eiko had been working over the previous year on creating her website that houses part of the vast archive of Eiko’s solo works.

“Recognizing that quarantine has affected every aspect of our lives and taken a significant toll on everyone’s survival, Eiko and I propose we just take slow steps to communicate and reflect and hope that the process will create new works, thoughts, and encounters,” Hsu wrote on the website. “While we are trapped in a disconcerting present and dwelling on a precarious future, there might be value in revisiting certain materials from the past and placing them within our current contexts, rather than rushing to create new works to address the ‘now?’” 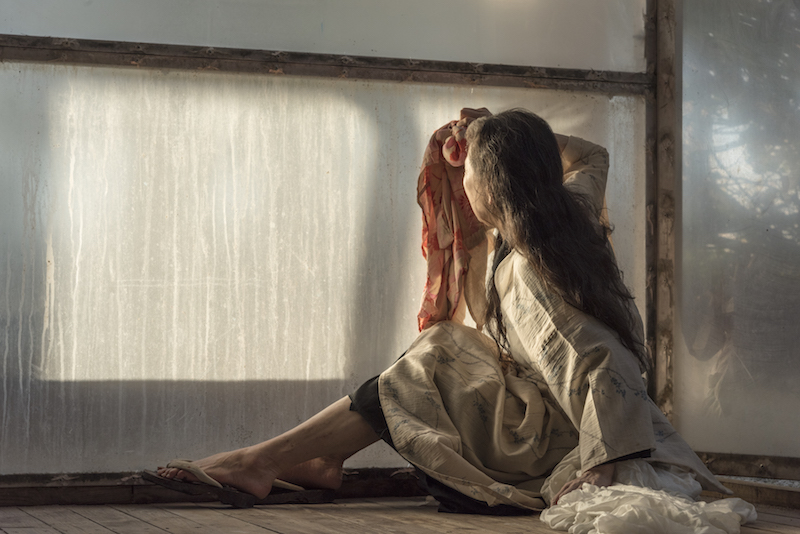 “We looked for older pieces because, one, in a distance, I am deprived,” Eiko said. “I don’t have my usual set-up for working…we can’t ignore the situation we are in. But I don’t want to make the work about [the pandemic] yet. It takes time to really understand…when some big thing happens, journalism can write a short piece about it the next day, a longer piece in a week and more comprehensive work in a month…a creative writer takes lots longer to situate [themselves] into the work, and really elaborate on it. [Just] as historians need longer time to understand how it got there and how it affects things then and in the future, artists need to live with it longer to observe oneself and others. So looking [at] the footage from before and editing it now is one way to learn about now how it is different from then and still carries the same me.”

Eiko edited the work from quarantine in Japan, having spent the previous few months in a dizzying series of travels—first for work, then due to the pandemic—from New York to Fukushima, Japan, to China, to her home in Manhattan, and then back to Japan. Eiko had to quarantine in all three countries. The first piece that she re-edited for the residency during her quarantine was “Room,” a slow, entrancing film-dance that her frequent collaborator DonChristian Jones ’12 shot of Eiko in 2017, while they were at the Rauschenberg Residency in Captiva, Florida.

In “Room”—the soundtrack Eiko created consists of ambient noise, with the sound of bells in the distance—Eiko and the light that falls through the plexiglass walls are nearly equal partners. She uses a red cloth to touch the glass but not wipe it, she licks gently at her own arm, she slowly moves her bare feet over wooden floorboards. The idea to start with this piece for the residency, Eiko explained, came to her instinctively. The piece seems to speak not only to the slow passing of time but also to an intimacy with a particular place; the memories of smell and of a body in the place related to the indoors-ness required of quarantine. There is also the resonance with Rauschenberg who worked in the space—with Eiko’s arm holding the red cloth against the plexiglass, almost performing the texture of his work, that quality of the fragment pushed-up-against-something. Or, perhaps, of creating a motion of the fragment prior to it having been affixed.

While editing “Room,”  Eiko also came to realize Rauschenberg’s war experiences, although “a pandemic is NOT a war. Saying otherwise is inarticulate and dangerous,” she is quick to clarify, given both her own sustained engagement with work about the war violence and post-war Japan, and the way in which the current pandemic brings to mind the type of costs and emotional toll often used in describing wartime.

“[Rauschenberg] had a pretty heavy experience during the war, though he didn’t want to go to the front line,” Eiko said. “So he never left America, but he was stationed in hospitals, and he was tending the dead bodies, and then he was tending the psychiatric ward. He saw what war does.”

“So through all the war-wounded writers and creators that I was so familiar with [in Japan], it connected back to Rauschenberg, in a way,” Eiko said. “How witnessing the results of massive violence must have affected him. Learning this, he became to me more than a great  successful artist and a wonderful human…he had swallowed the War and that I thought made him really stick to the art making. And I was encouraged thinking about that.”

And then of course, embedded in the work—and in the current moment—is a reminder of the AIDS epidemic, which many of both Rauschenberg and Eiko’s friends died from.

“When we talk about the AIDS epidemic in the 80s and early 90s,” Eiko said, “not only were the people infected and those surrounding them were threatened…but I didn’t really realize the depth of despair when one of my gay artist friends told me, ‘not only I was threatened, but I lost many of my audience members.’”

Eiko noted that Jones, who works with her often, originally appeared in the footage for “Room,” but she removed him in the edit that she made while in quarantine, perhaps because she was thinking so much about what it means for someone to be present in a room in more subtle or ghostly ways, such as through memories or the eye of a camera.

“So having the camera view only, and not his body…his view can be your view…it’s a little mysterious what I’m doing in this room alone, and gives you the feeling of having [been] trapped in that place,” Eiko said.

In “Visit,” another video, Jones is in fact present, but both he and Eiko are seen through many fog-like layers of glass, wood and light, as if they are again pressed under glass, or moving figures in a Rauschenberg assemblage. The ghostliness of the piece makes it seem like a relic from another time, just out of reach—an affect that rhymes with Eiko’s words about what it is to think about touch during a global moment when most touch is suddenly dangerous and forbidden.

“It is always good to remember, we used to really honor touch,” Eiko said. “And so some of the video or the photos from before Corona time might be able to be used as a stimulus to your imagination and remembering. Sometimes really articulating what we miss might be actually a very realistic way to realize now/here…keep that strong wishing, desires, as a life force. Hunger is a life force.”

This ghostly kind of memory is, in Eiko’s aesthetics, inevitably tied to her understanding of the materiality that is so foregrounded in her pieces: wood, torn bandages, plexiglass walls.

“Somehow in any landscape there’s a crack of the wall [and out] comes a little weed blooming or even a tree coming from that….memories are like that,” Eiko said. “Sometimes you have it in your pocket, and you don’t even remember you had it, and then all of a sudden it comes out, so that can be called a ghost, and that can be called a spirit of the dead, or it may just be the particular time my memory that hadn’t surfaced has now come up.” 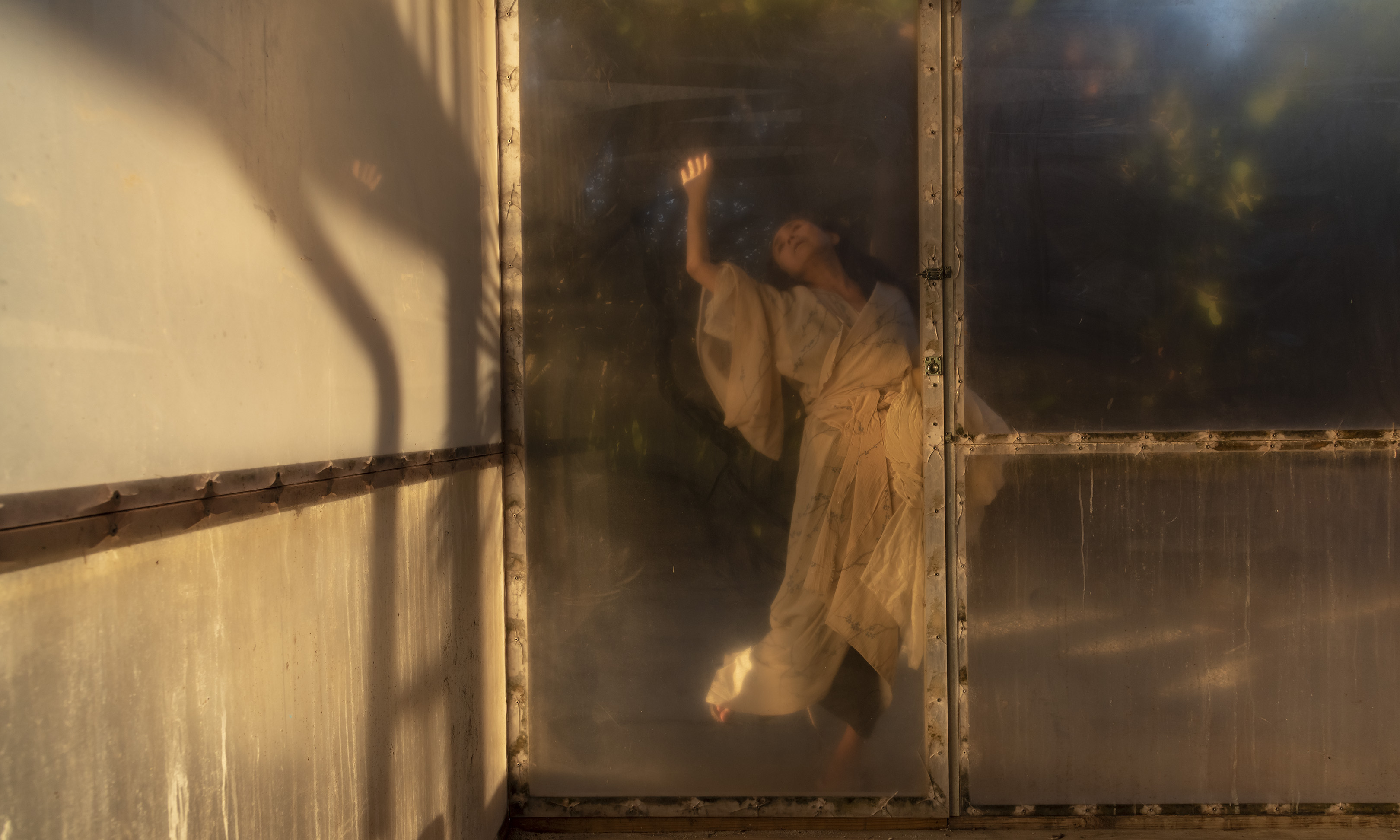 The third film, “Another Day,” was a collaboration with Wesleyan History Professor William Johnston. The piece is composed of still photographs—various conjectures of Eiko’s body with/against that same room of Rauschenberg’s. The images slowly accumulate, one after the next, punctuated by repeated darkness, until her body becomes merely shadow against the walls.

In addition to these pieces, the residency video archive includes “Attending,” a new, abstract edit of a performance piece created with Iris McCloughan ’10 as a part of “The Duet Project: Distance is Malleable,” and “Fish House,” the first piece without Eiko’s body in it.

The site also creates space for a variety of other engagements that are very much in tune with Eiko’s ethos of collaboration and community-building. It includes a “Reflections” section of Eiko’s writing; “Voices,” featuring the work and writing of several collaborators; and “Dialogues,” featuring an incredible conversation with Bill T. Jones, as well as Eiko’s work with Professor Johnston’s current Wesleyan class on pandemics. 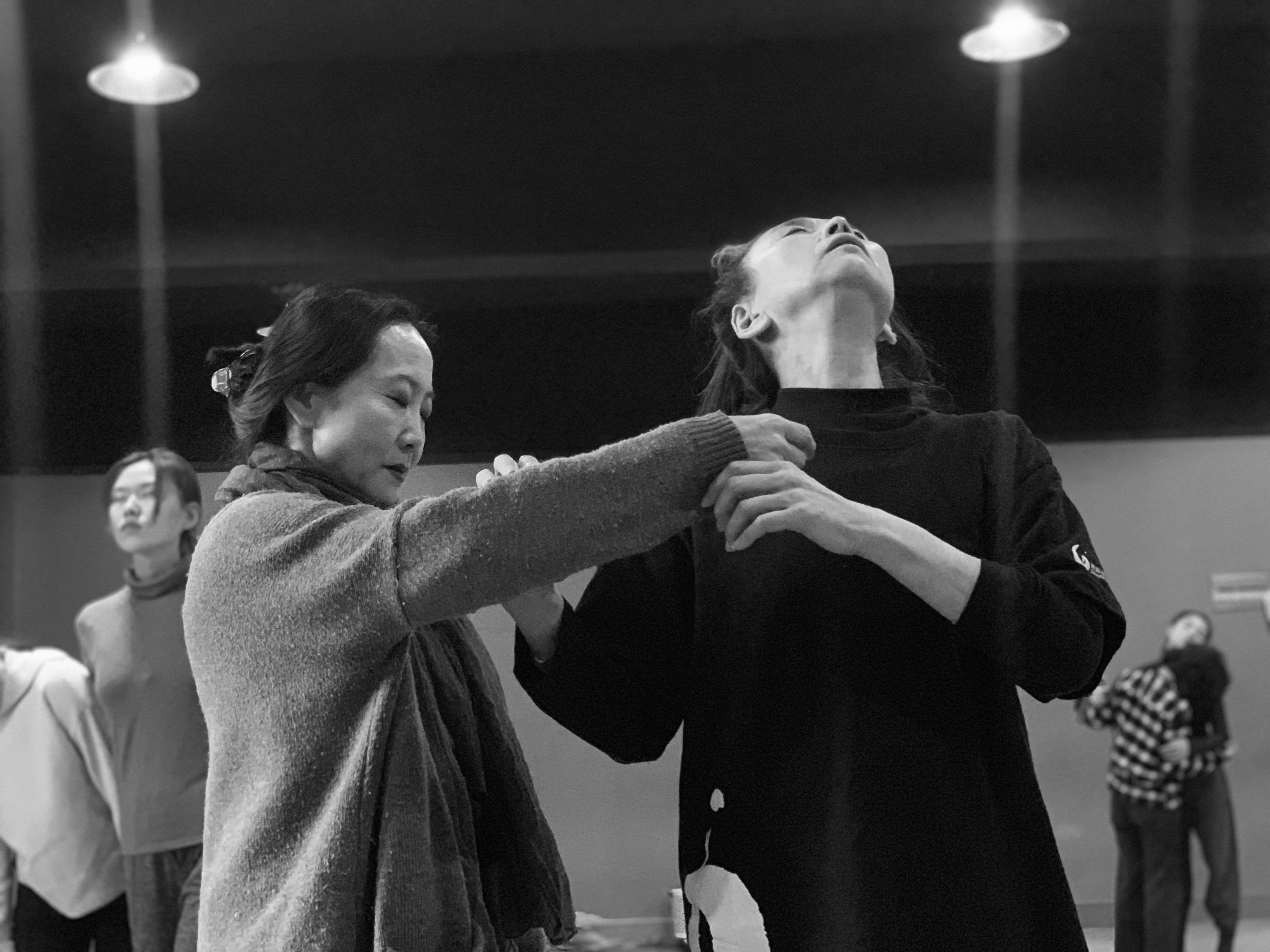 The “Reflections” section includes photographs and Eiko’s thoughts on the Delicious Movement workshop that she taught in Nanjing, China, on January 20, just before learning of the severity of the pandemic in Wuhan later that night. Looking at the photographs now, the physical intimacy and touch seems more precious and almost foreign.

“It’s kind of hard because I am articulating what we are missing,” Eiko said. “At the same time I think doing so will make us strong. We don’t want to be just giving into this post-corona era totally changed. We want to also keep what we used to honor, even though we might have to do it with care.”

Within “Voices,” Nora Thompson ’15 discusses her “Centipede” project, a performance piece that she originally started as Eiko’s student, and for which she drew a series of tiny figures of people over nine hours in the Olin Library lobby in an attempt to imagine the atrocity of the Hiroshima/Nagasaki atomic bombings.

“I aimed to explore how large numbers like death tolls and statistics dehumanize their subjects while also attempting to enliven each lost individual,” Thompson wrote. At Eiko’s suggestion, Thompson is continuing the project in order to think more clearly about where she is (in Brooklyn) and about those who have died of COVID-19 and those who suffer from the coronavirus.

Although Eiko has very much appreciated the virtual residency process, she hopes that the works will eventually have a second life in the physical sphere.

“I don’t want to just make works for the web,” she said. “I really want to create pieces that can be in the gallery, that can be in the theater, so that I am actually preparing myself for the time we can gather again. I’m not giving up gathering…because that’s what I’ve been doing all my life.”

In the meantime, Eiko hopes to continue her collaborations and conversations through the Virtual Residency. She hopes to hold a Zoom discussion in the near future. A “Respond” prompt on her website offers a way for any visitor to sign up for such meetings and engage with Eiko by sending responses, which she emphasizes has been already been a very rewarding aspect of the project for her.

“It feels like not only they see my mind, but by seeing my mind, something could open up in them. Their reactions tell more about themselves, their aesthetics, assumptions, and willingness to open up. I learn about humanity.” Eiko said. “And it doesn’t happen to everyone, but if it happens to a few out of many…I’m just grateful that mind and mind can encounter.”