Fifty-six Middletown residents have tested positive for COVID-19, and there are no known fatalities related to COVID-19 in Middletown, Connecticut Governor Ned Lamont announced on Tuesday, April 7.

“We have been lucky that we have not had any fatalities at this time,” Florsheim said in an interview with La Voz Radio on April 3. “We’ve had a lot of folks in Middletown who have gotten it who are relatively on the younger side. It’s people who have had relatively mild cases. We’re hoping that it stays that way as much as possible.” 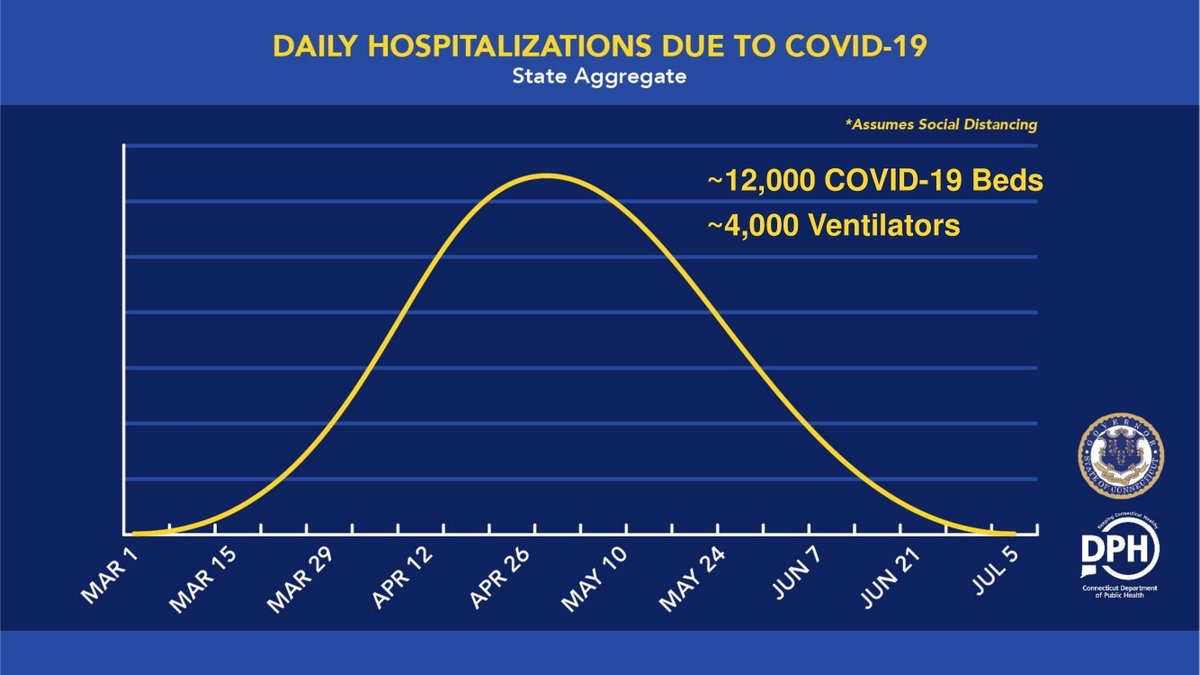 At his briefing on Friday, April 3, Lamont showed the estimated projections of COVID-19 hospitalizations in Connecticut. The statewide peak is expected to be around mid-to-late April and could require an estimated 12,000 hospital beds and 4,000 ventilators. According to the University of Washington’s Institute for Health Metrics and Evaluation, Connecticut will reach peak resource use on April 21. At its peak, they estimate that the state will face a shortage of 7,488 hospital beds and 1,751 intensive care unit beds, as well as a shortage of 1,573 ventilators.

The state also expects Fairfield, New Haven, and Hartford counties to see the highest number of hospitalizations at their respective peaks and projects that counties in eastern Connecticut will see much lower peaks in hospitalizations. Lamont attributed this to the lower population density in those counties.

“It’s the lowest density area, the place that’ll be last afflicted by the COVID virus, and you see a much lower surge in Eastern Connecticut,” Lamont said. “And again, that probably overwhelmingly reflects a little bit more time for planning, a little more conscientious perhaps on social distancing, but most importantly lower population density.”

As the state revealed its projections of Connecticut’s peak in COVID-19 cases, state officials explained what resources the state currently has.

The state’s Chief Operating Officer Josh Geballe said at the governor’s April 3 briefing that the state currently has 4,000 beds available in its hospital system for COVID-19 patients, though some are already being used.

“We have 7,000 beds in total in the hospital system—staffed beds—of which about 4,000 are available for COVID patients, a portion of those which are actually occupied with COVID patients right now,” Geballe said. “But we still have several thousand beds that are unoccupied in this state that could take COVID patients.”

“We are really pleased that we are one of the first states where they are able to get their 15 minute tests in operation,” Lamont said. “They’re doing that right now down in Stamford Hospital. So people go into an ICU, we’re going to be able to tell immediately or within 15 minutes where they should be going. Again, that frees up capacity, testing for nurses and first responders as we gear this up a little more so they know they’re safe and we can be a lot more methodical about how we allocate people there.”

With these new developments, Lamont continues to call on the federal government to respond to the continuous rise of COVID-19 cases in the state. 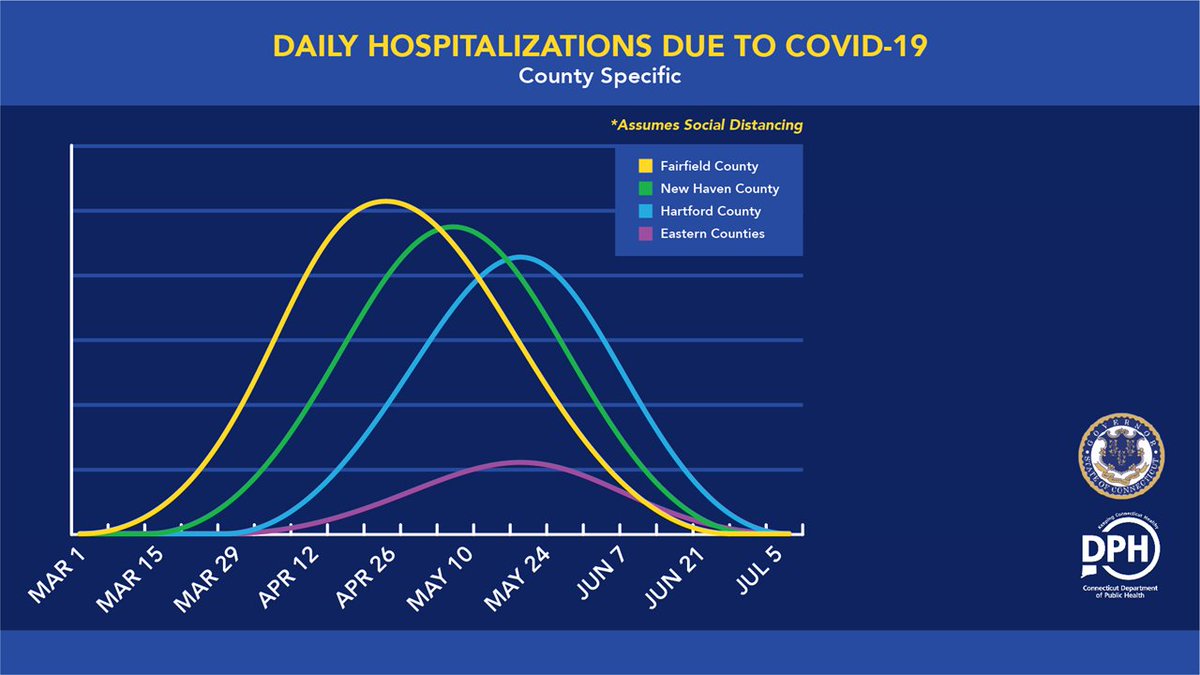 “We’ve been trying to explain to Washington [D.C] for some time that Connecticut—Southern Connecticut—is one of those hotspots and has been for some time, since we’re part of that greater New York metropolitan area,” Lamont said on April 3. “I’d like to hope that they act on this, now that they’ve recognized we’re part of the hot zone, now they see what the infection rate is. I believe they still have some ventilators down there in that stockpile, and I think they ought to be prioritizing Connecticut along with the other hot zones.”

In addition, Lamont announced on April 3 that the Connecticut Department of Labor had processed over 90,000 of the more than 250,000 unemployment claims filed in less than three weeks.

Lamont also announced on Saturday, April 4 that Connecticut’s public schools had served over 1 million meals at 128 school districts. According to Florsheim, Middletown Public Schools have served approximately 1600 meals a day since schools closed.

During his briefing on Friday, Lamont also spoke about whether school closures would be extended beyond April 20.

“I’m gonna leave that up to [Commissioner of Education] Miguel Cardona, but I think you can see the dates on these surges, and it does imply that we’re going to go way past April 20,” Lamont said.

Geballe also commented on the necessity of following restrictions even after Connecticut passes its peak in COVID-19 cases.

“When we get across the apex of those curves, that doesn’t mean that the next day, life goes back to normal,” Geballe said. “There’s still a significant portion of the population that hasn’t had COVID-19, and we need to think very carefully and act very carefully that we don’t take the restrictions off too quickly and…lead to another flare up.”

Following a request asking health care workers in Connecticut to volunteer during the pandemic, Lamont expanded that call to the general public on April 3. He urged volunteers of all backgrounds to help the state’s response to COVID-19.

“During times like this, it is critical that we come together as a community—as a family—and support our neighbors in this response effort,” Lamont said in a press release. “Our frontline providers at food banks, meal delivery services, and shelters need extra help right now, and that is why we are asking for more volunteers to step forward. I am grateful to everyone who has already pitched in to support Connecticut families. The way we’ll get through this public health emergency is by working together.”

He also said Connecticut’s 213 nursing homes will receive a 10% increase in Medicaid payments, which will help pay for employee wages, the cost of personal protective equipment, and more. An initial payment of $11.6 million is scheduled for April 7.

Lamont has continued to sign a number of executive orders as the number of COVID-19 cases in the state increases. His executive order on Sunday, April 5 protects health care professionals and health care facilities from being sued for acts or omissions in support of Connecticut’s COVID-19 response. It also protects those who are uninsured or those covered by insurance who receive out-of-network health care services during the pandemic.

In an executive order on Thursday, April 2, Lamont prohibited non-essential lodging, including hotels, motels, inns, and short-term rentals including Airbnb properties, limiting such housing and accommodation for essential purposes like the housing of health care workers or those needing to self-quarantine. The order also allowed restaurants and bars to deliver alcohol directly to customers’ homes.

Lamont has received some criticism for not releasing a sufficient number of inmates from the Connecticut Department of Corrections (DOC) system and failing to keep the state’s incarcerated population safe from COVID-19.

According to the DOC, between March 1 and March 24, 310 inmates were released from the DOC system. As of March 24, there were 12,099 inmates in the DOC system. At present, the DOC facility population is the lowest it has been since 2011 (the first year when data is available).

In addition to these cases within the state prison system, according to the Federal Bureau of Prisons, as of Sunday, April 5, 21 inmates and 7 staff members at the Federal Correctional Institution at Danbury had tested positive for COVID-19.

On April 3, U.S. Attorney General William Barr ordered the release of inmates at a low-security federal prison in Danbury, Conn., after a COVID-19 outbreak at the prison. Barr ordered the prison to move some inmates to home confinement.

On April 6, protesters drove by Lamont’s residence in Hartford, demanding the early release of more inmates, and on April 3, the ACLU of Connecticut filed a lawsuit against Lamont and DOC Commissioner Rollin Cook, asking them to grant an early release inmates who fall into certain categories.

“The suit asks the Court to order Governor Ned Lamont and DOC Commissioner Rollin Cook to immediately release people who are vulnerable to serious illness based on CDC heightened risk factors, being held pre-trial on lesser charges or low bond amounts, being held solely for technical violation of probation or parole, eligible for home confinement or supervised release, or within six months of the end of their sentence,” the ACLU website reads.

In addition, the ACLU also requested that Lamont and Cook produce a plan to keep the state’s incarcerated population safe and to provide support for people who are released early.

“The suit also asks the Court to require Lamont and Cook to submit, for the Court’s review, a plan to: provide hygiene, social distancing, diagnoses, and treatment for people who remain incarcerated; approve residential placements within seven days for those eligible for release; and fund transitional housing for those without residences to go to upon release,” the website reads.

In his April 3 press briefing, Lamont addressed some of the concerns laid out in the lawsuit.

“We are doing everything in the name of public health, and when it comes to folks who are incarcerated right now, obviously anybody that doesn’t have to be in prison is not being sent to prison,” Lamont said. “Anybody who is nonviolent or ready to be released or were soon to be ready is out. We’re opening up more capacity. The group that I’m most concerned about are the elderly or the older folks who are in the prisons right now. And I want to do everything I can from a public health point of view where they’re safest. Many of them don’t have any other place to go.”

In his interview with La Voz Radio on April 3, Florsheim expressed his support for the early release of some inmates to prevent the spread of COVID-19 within the state’s prison system.

“I’m glad to see that the ACLU is pushing it as an issue,” Florsheim added. “We don’t have a prison facility in Middletown, but we do have residents, of course, who are incarcerated in Connecticut. We have people whose family members are incarcerated. And it’s just incredibly important that we’re doing everything we can to keep those folks safe.”