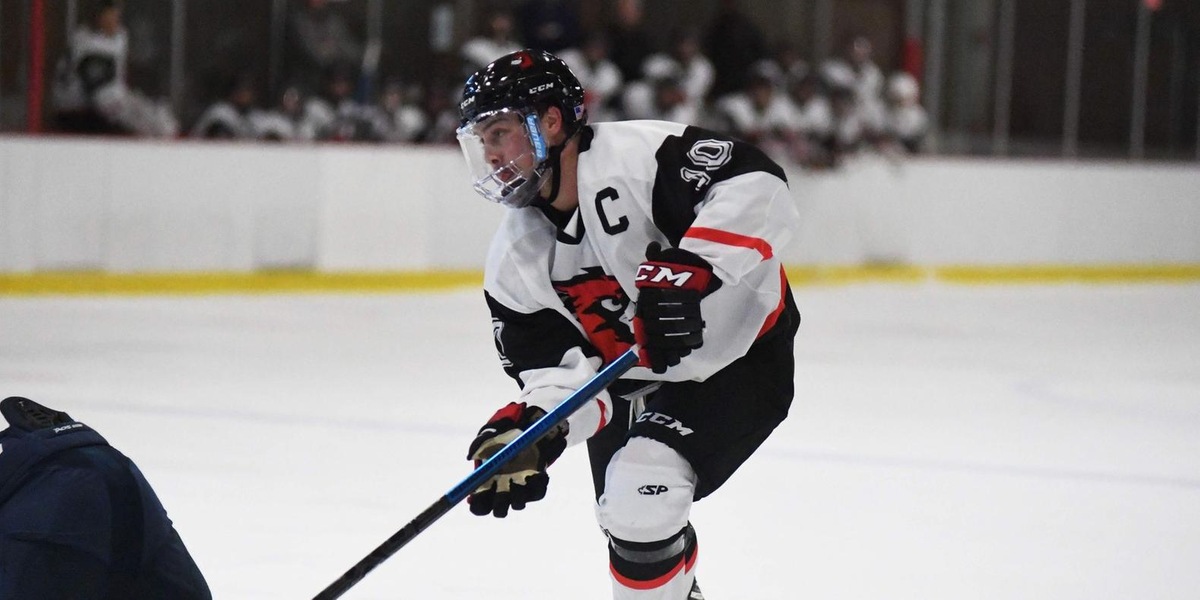 The men’s hockey team capped off their regular season with one win and one loss against no. 7 Trinity. On Friday night, the Cards upset the Bantams on the road by a score of 4–1. It was their second upset over a top-10 opponent in just three weeks, having beaten no. 9 Williams at home two weeks prior.

The game got off to a positive start for the Cards. After falling behind early in each of their last three games, Walker Harris ’20 scored just six minutes in. The Cards took this lead into the second period, where they were able to add to it immediately; Harris and Michael Kerbrat ’23 scored within 10 seconds of each other in the first minute of the period, putting the team up 3–0. Trinity finally got on the board four minutes later to cut it to 3–1, but Harris added a third goal in the third period to complete the hat trick and secure the 4–1 victory for the Red and Black. With the three-goal performance, Harris also scored the 100th point of his career. On offense as a whole, Wesleyan was actually outshot by the Bantams 47–21, but goalie Tim Sestak ’20 was stellar in net, stopping 46 of those 47 shots.

Following this victory, the two teams descended upon Wesleyan’s Spurrier-Snyder Rink on Saturday to play the second of the home and home set. In this second game, the script was flipped: Trinity won by a score of 3–1. In the first period, Trinity got off to a fast start, scoring just under three minutes into the game. The game remained 1–0 for the rest of the first and most of the second, until Trinity doubled their lead with only a minute to go in the second period. Wesleyan ended the Bantams’ shutout bid early in the third as Harris scored yet another goal on the power play just over a minute in. After getting on the board, Wesleyan had ample opportunities to tie the game but came up short as Trinity iced the game with an empty-net goal in the final minute of regulation. On the stat sheet, Trinity once again outshot the Cards 31–26. In goal for Wesleyan, Sestak made 28 saves.

Despite yet another 1-1 weekend, Captain Spencer Fox ’20 was ecstatic with how the team played in the two games.

“The team played its two best games all year this past weekend,” Fox said. “We were prepared for the playoff atmosphere and showed tremendous effort, execution, and discipline in going toe-to-toe against one of the top teams in the country.”

Fox remarked that the key to pulling the upset on the road was finding ways to score as well as feeding off of Wesleyan’s great defensive play.

“Our execution on Friday night was key to winning the game, as we were able to score four against a team that doesn’t give up many goals,” Fox said. “We were also able to kill off a two-minute 5-on-3, which gave us great confidence and momentum.”

Ironically, Fox also felt that the team played better on Saturday in the losing effort than on Friday when they won.

“The differences between those games were that although we possessed the puck more on Saturday, we weren’t able to bury our chances and two mental mistakes cost us,” Fox said. “In a tight game against a very good opponent, you need to be as close to perfect as possible.”

Next up, the Cards begin their NESCAC playoff campaign as the fifth seed with a quarterfinal matchup against fourth seeded Middlebury on the road on Saturday at 4 p.m. Since they last played three weeks ago, Middlebury went 2–2 in their four conference games to finish the season with a conference record of 8–7–3. They also finished in the top three in total scoring offense in the NESCAC this year, so this will be a tough matchup. The Panthers and Cardinals have split their two matchups so far this year, with Middlebury taking the most recent contest. Fox, confident in the team’s ability to win, says that the key to victory will be playing up their speed advantage over the Panthers.

“The key to beating Middlebury on the road will be our speed,” Fox said. “The massive ice sheet at Middlebury allows faster teams to win more foot races and get more separation when skating up and down the ice. We were able to beat them 3–1 on the road earlier this year, and we look forward to the opportunity to do it again.”