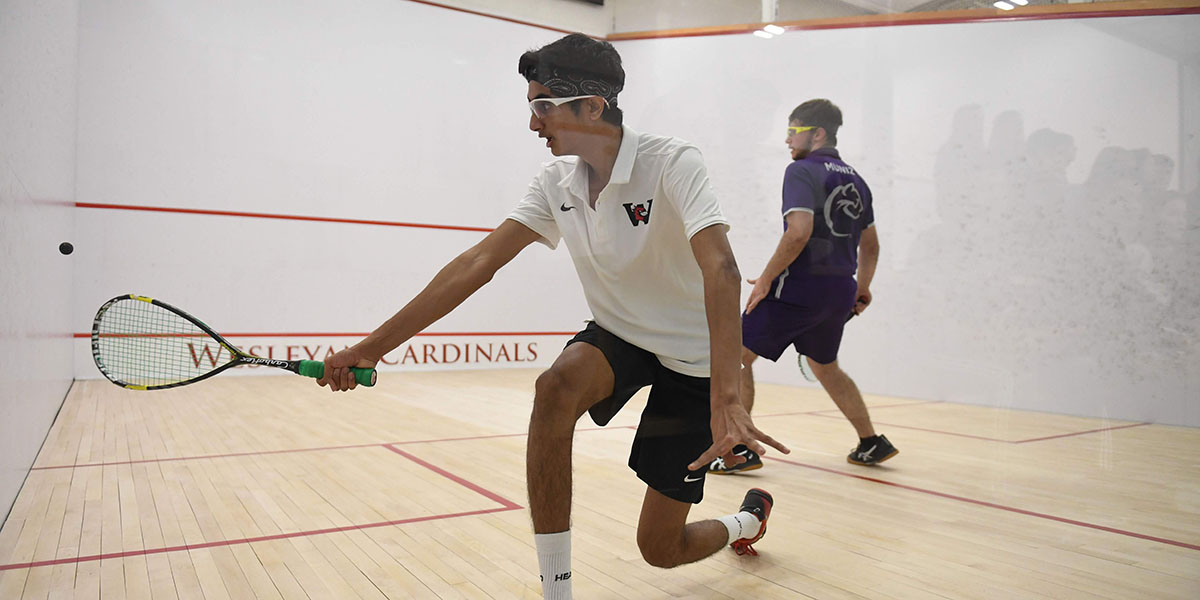 With the difficult Little Three championship behind them, the men’s squash team was hoping to build momentum at the NESCAC championship. This year, the Cards traveled up north to Brunswick, Maine to compete in a tournament hosted at Bowdoin College.

The first match of the day had the Cardinals against Colby. The Mules had the decisive advantage of a significantly shorter road trip, considering that they only had to travel one hour as opposed to four. The long day showed itself in the match, as Colby trounced the Cards 9–0. Sean Choi ’21 fought for an 11–7 win in the second game of his match at the top of the ladder. However, this was the only game the Cardinals won for the entire day. The Mules played perhaps their best squash of the season, blanking the Cardinals throughout the afternoon.

It is essential to note that the Cards were going into this game undermanned because the No. 2 on the ladder, John Sutherby ’23, sustained an injury last weekend. While losing anyone on the ladder to injury is devastating, having the No. 2 down for the match meant that everyone had to play a spot higher on the ladder than usual, which is a difficult task for any team.

After a tough first game, many teams would have wilted, especially with a match against men’s squash powerhouse Hamilton—who had already bested the Cardinals once this year—looming ahead of them. The Cardinals, however, would not go down without a fight.

“This team’s biggest strength is its culture,” Will Bienstock ’20 said. “Coach Kerr has brought in hardworking, kind people that play for one another. If you don’t have the right culture, squash can start to feel like an individual sport. We don’t have Trinity’s legendary talent, but we have the best culture in the NESCAC. I’m really proud of the way our team battles each weekend.”

Unfortunately for Wes, facing the mighty Hamilton team while sustaining injuries proved to be too much for them, as the team lost in a hotly contested match 5–4.

Despite the loss, the story of the game will not be the scoreline, but rather the tremendous fight that Wes showed throughout the day.

“We started the Hamilton match 3–1 down and seemed like it was going to be a similar pattern to last time, but to see everyone fired up and catch up to 3–4 and have the final two matches go to the deciding set was a real highlight for me,” Choi said. “It showed the grit and fighting spirit of our team.”

While the Cardinals grabbed victories at the top and bottom of the ladder, the game of the day, no doubt, was freshman Shanay Sanghavi’s thrilling match in the No. 2 position.

“Shanay Sanghavi played an electric five-game match against Hamilton that nearly netted us the win,” Bienstock said. “Though we ended up losing 5–4, he came back from down 2–0 and overcame an injury to beat a very talented player at the No. 2 spot. I thought the whole team played really well this weekend despite being banged up. I’m confident that if our team sees Hamilton at Nationals that we’ll improve on the result. We’re only getting better.”

This confidence will be important as Wes looks to find areas to improve their game heading into nationals in late February.

“It’s crucial that we regroup and work real hard for the next two weeks,” Choi said. “Many of us are starting to get burnt out towards the end of the season, but nationals are where it matters as it will be the final season rankings.”

Sutherby echoed his captains’ sentiments as he looked ahead to Nationals.

“While we were playing a man down this weekend, we still managed to play some of the best squash of the year,” Sutherby said. “It is great to see that we are peaking at the right time, with Nationals just two weeks away, and while we were not able to beat Hamilton on Saturday, we likely will have another chance at nationals where we look to avenge our loss. We still need to sharpen up on some tactics and in match situational play but in two weeks time we will be more than ready for nationals.”

While the season has been a roller coaster ride for the Cardinals, hopefully they will avenge their NESCAC performance in the most important tournament of the year. But first, some much needed rest.