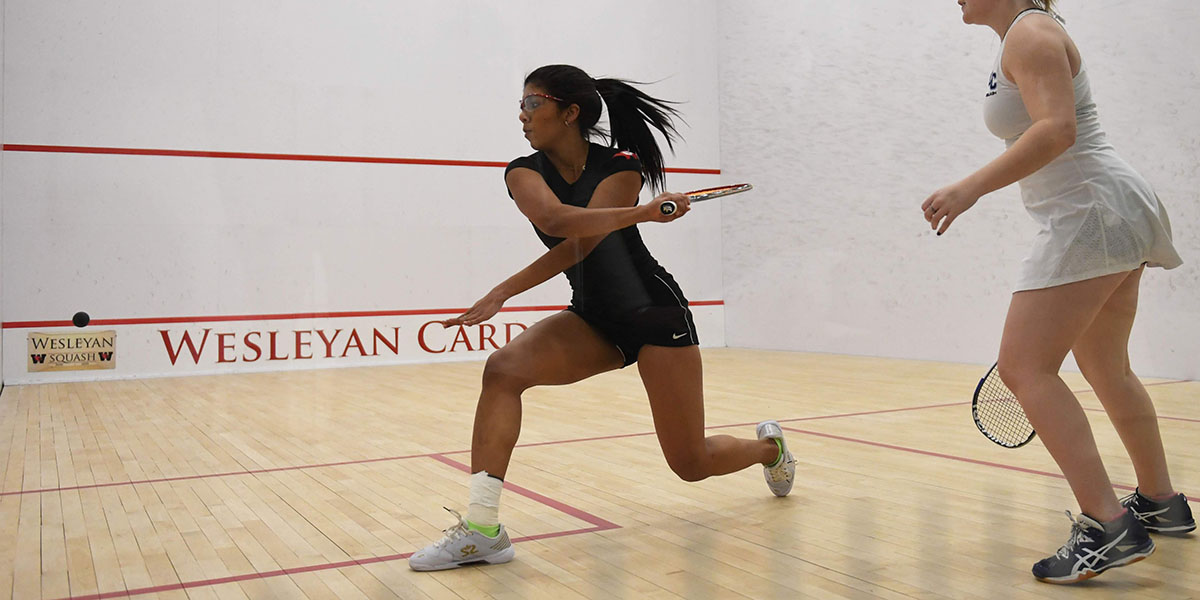 On the weekend of Feb. 7, women’s squash faced their toughest competition of the season thus far: the NESCAC Championships. Wesleyan hosted the championship, giving the Red and Black a vital home court advantage for their final home games of the season.

The weekend started off with a rivalry match against Connecticut River foe, Conn. College. The Cards have already stifled the Camels 9–0 in an earlier match, and this weekend the results would be no different. The Red and Black obliterated Conn 9–0 once again. The top three spots on the ladder, Aditi Prasad ’21, Ananya Vir ’21, and Josephine Russ ’20 all secured 3–0 sweeps. Natasha Feenstra ’21, Sofia Melian-Morse ’20, and Annie Roach ’22 all battled back after dropping their first matches to win in four games. The only match which the Cardinals let go to five games was sophomore Emma Smith’s No. 9 spot match. Nonetheless, Smith came out victorious, completing the domination of the Camels.

With Friday in the books, the Cardinals returned to their dorms to rest up before the rest of their busy weekend. In the wee hours of the morning, the Cards awoke ready for their much-anticipated face off against NESCAC powerhouse, Williams. In an almost exact repeat of the previous day, the entire Cardinals’ ladder was swept, with the exception of the best match of the weekend, the No. 1 square off between Prasad and Williams’ Julia Ward. The first three games had alternating victories, which saw Ward ahead 2-1 heading into the fourth match. In one of the most intense games of the season, Prasad battled and won 16–14 against her Little Three rival. Finally, in the fifth game, Prasad once again won in overtime 13–11 getting the win for Wes at the top of the ladder.

“My match against Williams was possibly the best squash I have ever played at Wesleyan,” Prasad said. “It was also an extremely big win for me because I had never beaten my opponent before and I had just lost to her the weekend before NESCACs during the Little Three. What made the win even more exciting was that Williams is ranked so much higher than Wesleyan which meant beating their No. 1 was definitely a victory worth savoring.”

Prasad’s teammates were equally impressed with her performance.

“I think Aditi’s match against the Williams’ number one was very intense,” Ainsleigh Caldicott ’21 said. “She played to five and was able to beat her opponent when she had previously lost to the Williams’ player in three at the Little Three tournament, so I think everyone was on the edge of their seat for that one when they got to the fifth game.”

“Aditi’s match against Williams was really exciting, she had lost to that girl the weekend before at the Little Three so to see her really compete for every point through a long five game match was great,” Carly Blue ’22 said, echoing the same sentiment.

Maintaining the competition level is perhaps the most important part of NESCACs, which are grueling, both physically and mentally. Later on the very same day, the Cards had to face off against Tufts in an evening match-up. Much like their battle against Williams, the Cardinals were for the most part blanked throughout the night. The brightest spot on the team came from Feenstra who delivered the sole victory of the evening for the Red and Black, winning in a thrilling five match affair.

Despite the loss, the players were still proud of their intensity on the court.

“I mean we definitely competed really well, even in the matches that we lost we really made the other teams fight for their wins,” Blue said.

With the hardest day of the competition behind them, it would be natural if the Cardinals were complacent going into their final game of the weekend. However, they shook off their exhaustion from Saturday and came back focused on the task at hand.

The Polar Bears stood in the way of the Red and Black on their final game of the weekend. Unfortunately for Bowdoin, the Cardinals were ready to win as they lay waste to their opponents from up north. The Cards won 7–2 in convincing fashion. The top of the ladder, as usual, was a battle with Prasad narrowly edging out her opponent in five games. The Dirty Birds showed their fantastic depth with an astonishing five sweeps from Vale Osorio ’23, Feenstra, Nina Premutico ’20, Melian-Morse, and Smith.

It was an important win for the team, as they needed to build some momentum heading into nationals next weekend.

“I think we’re looking very strong going into nationals this year,” Calicott said. “We’ve been fine tuning a lot of technical and tactical aspects of our game, and we’re ready to implement everything we’ve worked on into this last round of high-intensity match play. We’re ready to compete.”

“I am so proud of the girls and I am looking forward to an amazing performance at nationals,” Prasad agreed.