Middletown Diaries: Locked in the Basement, Coffee Fraud, and Random Kindness in Usdan

I keep a list of unanswerable questions written down in my room. What is human freedom? Why do we exist? Which “orange” came first: the fruit, or the color? But most important is the question that has been bothering me lately: is the coffee at Pi and Usdan really the same flavor?

Every morning, I drag my caffeine-addicted body to Usdan and order a cup of coffee. It’s the highlight of my morning; in between those painful seconds when you get out of bed and those seconds when you sit down in class is the moment of bliss when that hot bean juice hits your lips. But what I love the most about getting coffee every morning is the sheer variety of flavors the esteemed Pierce Bros. provide. I can sample beans from Colombia for a roast with “a heavenly aroma and buttery body”; I can travel to Peru for “a medium-bodied coffee with smooth richness, fine tangy aroma & lively acidity”; I even can kickstart my day with a Guatemalan roast that is “superbly aromatic with a distinct, smoky spice flavor.” If I’m feeling especially tired, I can pull out all the stops with their signature Fogbuster roast. Advertised as “the darkest coffee you’ll ever find,” it’s “a blend of five kinds of beans and three different roasts” that “has just enough acidity for a rich cup.” It wasn’t until I reached Middletown, Conn. that I truly realized just how big the world is.

But after three and a half semesters on campus, I’ve built up enough knowledge and experience to make one claim, and one claim only: that Pierce Bros. is running a fraudulent scheme the scale of which has never been seen before. That coffee I once extolled as having the “full bodied rich flavor of high grown Arabica?” It tastes just like “the nutty flavor of Ethiopia mingled with a hint of sweetness from Central America.” Maybe I’m just uncultured, and can’t separate the distinct, subtle notes of flavor between the different varieties of coffee. But the conspiracy theorist in me remembers the Great Fruit Loops Scandal of 2014, when the world learned that the different-colored rings were actually all the same flavor.

So is it unreasonable that Pierce Bros. could be pulling one over on us? Absolutely not. But if it’s indeed true that the coffee provided to us is all the same, then I’ve lost another source of joy in my life. Maybe this freedom of choice is illusory, but it provides me light in a dark, dismal winter. It might be a myth that the University provides us with gourmet café, but it’s a myth I choose to believe.

Today, humanity showed the peak of what is it capable of. I had just grabbed my Mongo stir fry and was ambitiously trying to balance my plate while going for a drink in the middle of the Usdan lunch rush. At the risk of sounding bland, I went for the water—the clean pure water that could never come from the Gatorade water dispenser, but rather from the four-pronged drink dispenser.

When I saw that someone was already at my preferred water dispenser, I was aghast; and worse yet, he was filling an entire water bottle. For many people this is the norm, but in my opinion, if you are looking to fill an entire bottle in the middle of the lunch rush, a friendly suggestion is to go for the Gatorade dispenser.

When we locked eyes, he moved aside and motioned for me to come fill my cup, in a gesture of friendship. Seeing my precariously balanced plate, this glorious stranger proceeded to push the button to fill my up my water.

I never got his name; I simply thanked him and walked off, water in hand, and a renewed faith in my fellow man. 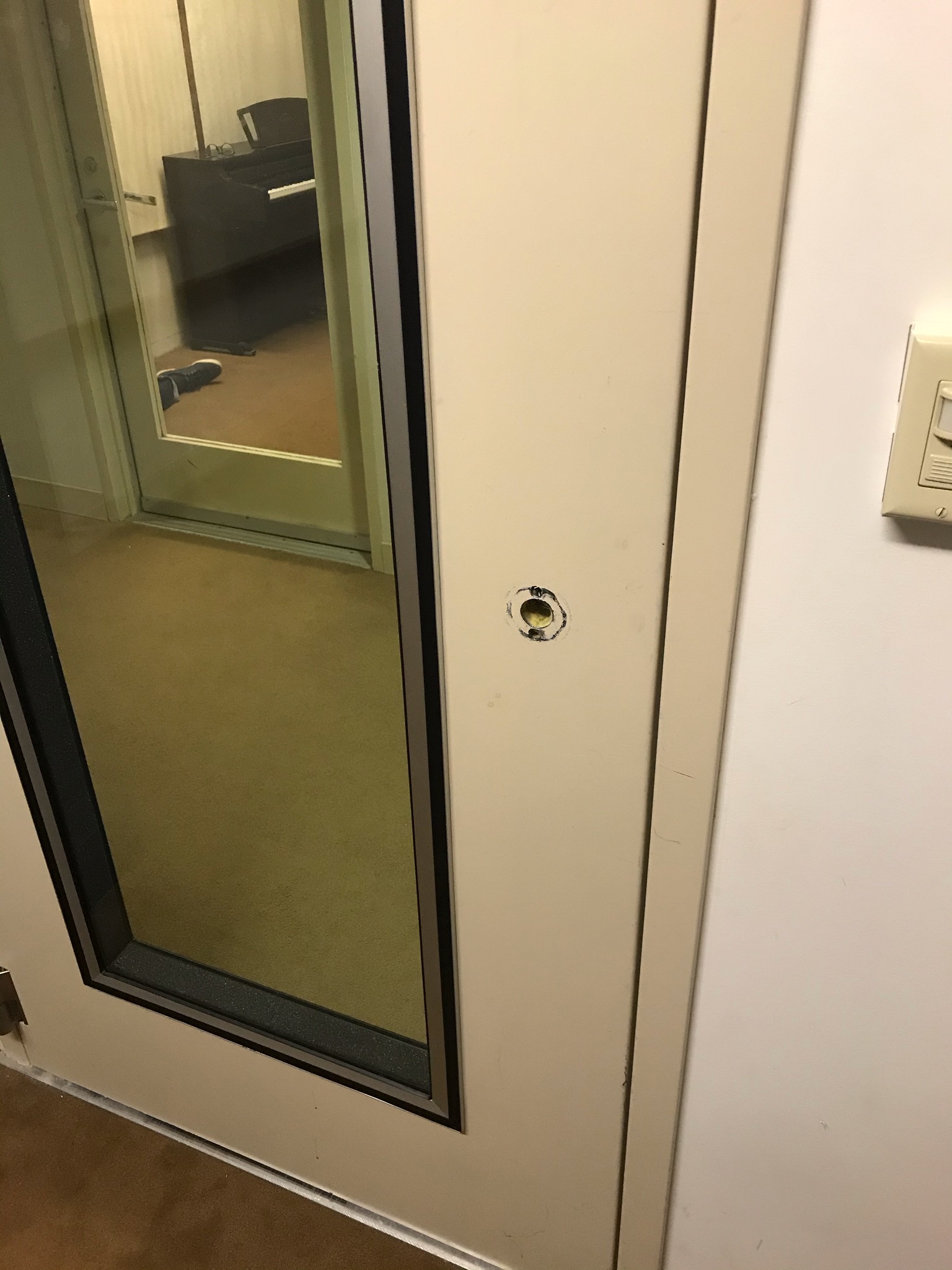 “I’m calling with a bit of a silly emergency,” I said when Public Safety picked up the phone. It was Friday afternoon, and while some were celebrating Valentine’s Day or the approaching weekend, I had found myself unexpectedly locked inside one of the studio rooms in the basement of the music building.

Anyone who frequents the music studios knows that 1. They are some of the best places to be (or cry) alone on campus and 2. The doors that attempt to keep the sound inside the rooms are really, really heavy. On this Friday, however, I fortunately was not coming into the studios to cry, but rather to take an hour at the end of a long and stressful week to exercise my minimal piano skills and sing some tunes. Since I usually come into the music studios at odd times in the night or early morning, I was a little surprised to find that when I descended into the basement and peeked through the glass panels on the doors, all of the studios were full. That is, all of the studios were full except studio 19, which had a music stand serving as a doorstop and a beautiful grand piano calling my name. It was fate. I removed the music stand from the door and walked to the bench, positioning my fingers on the keys to play a few scales.

In this studio, there was a certain humidity which had not been in the hallway. Perhaps it was the acoustics, or perhaps it was the general lack of natural lighting. I slipped off my parka and the two sweaters which had been a necessity outside in the frigid February cold. But as I stood up to remove my layers, I glanced at the door, which looked a little off. It looked a little off, I realized with a sinking heart, because there was no doorknob. Yes—where the doorknob should have been was a tennis ball-sized hole. And, unluckily for me, the outside knob was still attached, so the locking mechanism of the door was still very much in place.

The sound-proofing of the Wesleyan music studios is nothing to write home about; I surely could have shouted for help. All I needed was for someone to twist the outside doorknob, and then I would’ve been home free. And yet—diary, I must admit—my embarrassment got the better of me. There were students all around, but we were each in our own cells, each in our own musical hibernation from human interaction. In fact, through the glass panel of my door, I could see someone’s foot through the glass of the door across the hall. But over the clamor of tuning violins and students playing rock ballads, my knocking went unheard. The foot remained in place, lightly tapping to the beat of a piano melody. I waited a few minutes, staring out the glass panel and praying for someone to walk by. Resembling John Travolta in “The Boy in the Plastic Bubble” was not part of my Valentine’s plans, I thought with frustration.

In all fairness, I didn’t wait very long. Instead, I pulled up my contacts and found the Public Safety numbers. I also mentally thanked my orientation leader for having us put these numbers in our phones. A Psafe officer came shortly after to perform the heroic deed of twisting the knob.

So diary, my tale has a happy ending. It also has a cautionary P.S.A. for those who like to get away from the campus bustle every once in a while: if you find a good place to cry without being heard, carry a sandwich and a sleeping bag.