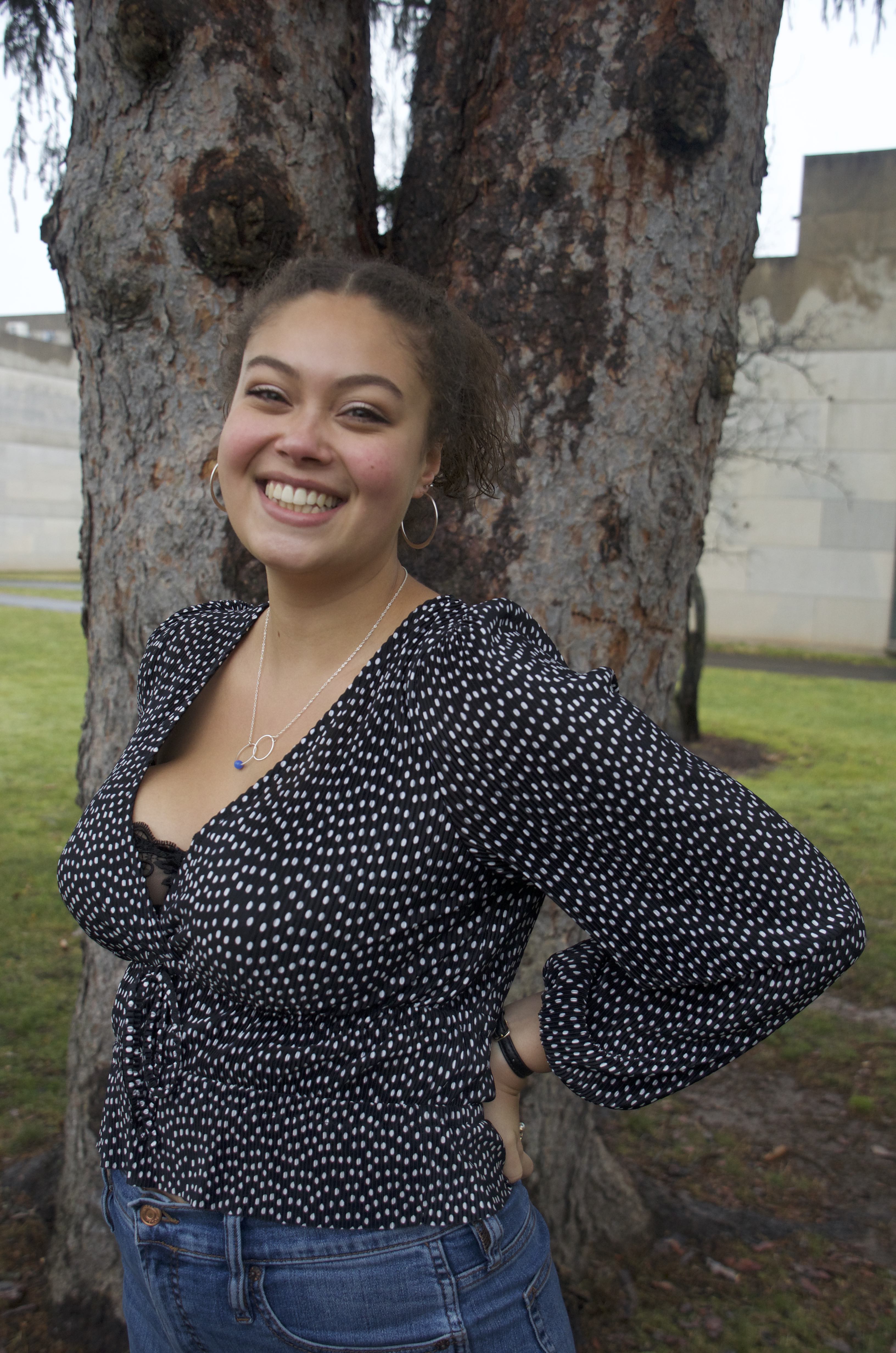 Meet Simone Roberts-Payne; the friendly face of Olin, Espwesso, Usdan breakfast, and maybe your first-year hall. Wherever you see her, you can be sure to expect her welcoming smile. She’s done everything from bring a mechanical bull to campus to help create a new department. Simone is a member of the African American Studies (AFAM) Majors Committee, a committed member of ResLife, and a major contributor to and editor for The Ankh, Wesleyan’s student-of-color publication. Throughout her time at Wesleyan, Simone has transformed from an email-phobic first year to an email-extrordinaire senior. The Argus sat down with Simone to get the scoop on ResLife, the creation of the AFAM Department, and the little joys of Wesleyan she will miss after graduation.

The Argus: So why do you think you were nominated?

Simone Roberts-Payne: Good question. I feel like honestly it’s because I work the Olin circulation desk, and it’s just a very visible spot. When I first started the job, I used to work in the office and and check out books. But now I’m at the front, and I see a lot of people that way. I just make friends, I guess, that way.

A: Have you worked at Olin all four years?

SRP: Yeah, it’s honestly the most consistent thing I’ve done. I started, like, my first day of freshman year. So I’ve been doing it since then!

A: You were described as the friendly face at Olin circulation desk. What else are you involved in on campus?

SRP: I do a lot of the publication stuff for The Ankh, which is the student-of-color publication. I’ve been doing that since sophomore year, which is really exciting. Before that, I was scared to email people. That was a big fear of mine freshman and sophomore year, so I would just help out as much as I could and do, like, events and stuff for them. But now I do mostly emailing people and asking for money, and doing editing and layout stuff for The Ankh and helping other people do that stuff too. I’m also a part of the AFAM majors committee, because I’m an AFAM major. So that is mainly trying to get more African American Studies majors, get more recognition, and trying to have events with current majors. We want to have a little party when people declare and stuff.

A: How did you get involved with that?

SRP: With The Ankh it was kind of like, I was interested in poetry and writing freshman year, but didn’t know how to do that and where to do that. So I think I just had a friend that maybe had a piece in The Ankh and I was like, “Oh this is cool! Maybe I could start going to meetings and stuff!” When I started sophomore year, it was definitely a group and a place to hang out and meet upperclassmen, so that was good. And then with the AFAM majors committee, I guess you’re elected to do that. I don’t know. And then you choose other people after.

A: Were you part of that process?

SRP: Yeah, a little bit…. I was abroad the second semester, but first semester I was on the hiring committee for a history professor. So we sat in on a ton of different lunches, and the different professors had to give their own lecture. So then we’d watch them and give them evaluations and stuff. So I was a part of hiring someone. That came with the departmental status. So a lot of the hiring stuff not student run, but it was with students and faculty. The actual departmental process we weren’t really involved in, but there was definitely a push from students to have that status, which is exciting now. And more funding and stuff, which is good!

A: So you were my Resident Advisor [RA]…

A: What was your experience like, and what made you want to be an RA?

SRP: I wanted to be an RA because I really loved my freshman RA. I had a really small hall, it was like 10 people as opposed to ours, like 30. But she was just so sweet! It wasn’t like we were hanging out all the time or anything, but it was just nice to have someone that you see and like can tell something to if you need to. And I think I felt like a lot of my friends in general would come to me, or just anyone. And I could do that and I’d get paid for it. And it was fun! It’s definitely a commitment, and you’re living where you work, but being an RA is very cute, and you get to see freshmen grow up and stuff! I like it. And now I’m a Community Advisor [CA] for seniors, which is very different. Seniors don’t want to come to any events or anything, so we’re trying to coerce people to come to things. It’s completely different than being an RA but it’s nice—I get to live with my friends and also be a part of ResLife still. I like it.

SRP: It’s more like newsletters, and sending out emails. Like, “seniors have to do this with their house!” or like “make sure you take out your recycling!” or something. It’s a lot of more general information, and then we have events every month. Like in the beginning of the year we had a mechanical bull event, because we have an absurd amount of money, because there’s like 800 seniors. So we just have random events. We’re gonna have a bingo night and raffle off AirPods, so that’ll be coming soon.

A: Yeah, you were definitely a very warm face to have as an RA my freshman year. Do you know what your post-grad plans are yet? Or any ideas of what you would want to do?

SRP: Ah, good question. [Laughs] Not totally. I’m interested in doing some sort of literary agency or like publishing/editing kind of thing, because I did something similar over the—or like, I worked for a writer over the summer, and so that was fun to see all the different sides of books. I’m really into young adult fiction, and want to do some sort of thing that has to do with African American Studies and young adult fiction, like helping that in any way I can. I just like books and I like young people to read.

A: Which writer did you work with?

A: How did that happen?

SRP: Professor [Elizabeth] McAlister in the African-American Studies department is friends with her from a long [time ago]…. I don’t even know how they’re friends, but I got a Wesleyan Summer Grant, and then I was going to do work for this poetry non-profit and then it fell through, they went through all these changes, and I was like, “What do I do now?”, and so she helped me out a lot, which was really helpful and will help for the future. The Summer Grant, which I recommend everyone apply for, is definitely a process but it makes a big difference. I’ll probably be in New York City too [post-graduation], which is where every Wesleyan person is [laughs], it’s like insane. Those are my plans for now.

A: Do you have any way that you would like to be remembered?

SRP: Oh my god! [laughs] I’m not—not really. I honestly don’t know, I feel like the Olin circulation desk is probably how I’ll be remembered, but I don’t know if that’s what I want. We’ll see. I also am a big Espwesso fan, I know they’re having trouble right now, but they’re going to be up and running soon and so I go there every single day. Honestly I’d love to be remembered by that too, just like being Espwesso’s biggest fan.

A: Are there any other spots you think you’ll miss?

SRP: I think now, being a senior is very different because we spend so much time in our houses, so I’ll probably miss my house and just hanging out with my housemates. What other Wesleyan things…. I honestly haven’t been on Foss in a while, so I don’t know about that but my house, Olin is cute, you know.

A: What’s living in a house like compared to a dorm?

SRP: It’s a game-changer. It’s just nice to have people to come back to and hang out with, and you just have your own space, you can cook—I’m not very good at cooking, but I like to help other people cook. It’s just really nice to live with your friends, basically, but also have a single.

A: What’s your favorite Wesleyan memory?

SRP: I feel like I probably should’ve thought about this….I don’t know about Wesleyan—I really enjoyed my abroad experience.

A: Where were you?

SRP: I was in Cape Town, South Africa. So I feel like that—just going abroad, I feel like everyone should do, honestly, but then when you come back, like it makes you miss Wesleyan a lot, and then when you come back, you appreciate everything. I was like “I need to go to Usdan breakfast.” Like, who loves Usdan breakfast? Nobody loves Usdan breakfast. Just little things, like I missed—I loved everything about abroad, basically, and just living somewhere else for five months. And I love Cape Town, it’s so beautiful, but it did make me miss all Wesleyan things, and just seeing your friends every day and stuff.

Nora Markey can be reached at nmarkey@wesleyan.edu.