“Wes For Bernie” Takes New Hampshire: A Tale From The Campaign Trail 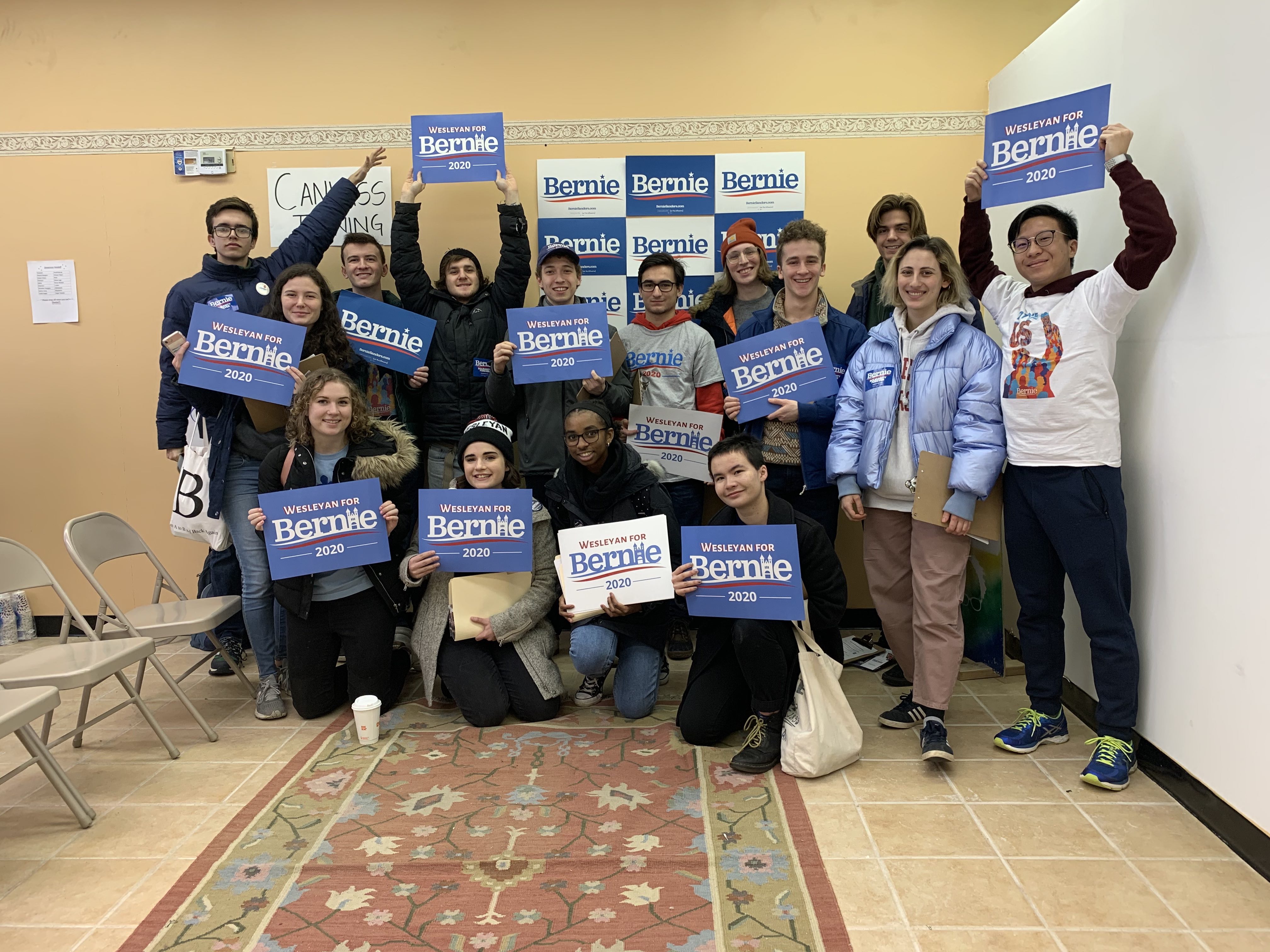 For the naysayers who doubt the absolute dedication of college students to the Bernie Sanders movement, Wes for Bernie’s all day excursion to canvass in New Hampshire would prove them wrong. Waking up at 7 a.m. on a Saturday should be the only evidence of our commitment to Bernie that skeptics need.

On Saturday, Feb. 1, 15 members of the student group “Wesleyan for Bernie” drove up to Manchester, N.H., for a day trip to canvass. We drove up in three cars around 8 a.m. and returned by 7 p.m. I’d like to say mine was the most fun because I was in it.

As soon as we stepped inside the office, the atmosphere reminded me more of the campus dorms we had just left rather than the campaign office of a presidential candidate. Bernie posters lined the walls and mismatched donated furniture that looked like it came from a yard sale filled the space. It was temporary, but personalized, like most campaign offices (and most dorm rooms). CT for Bernie had also sent a full bus of volunteers, so the room was packed. It was so filled that they ran out of clipboards and I had to get my campaign literature in a manila folder.

After a training session and group photo, we got back in our respective cars and went our separate ways to canvass.

Coming from the suburbs of New York City, I felt like Manchester, N.H., was the middle of nowhere, even though it’s the most populous city in northern New England. As lonely and isolated as the area felt, there was also a feeling of serenity. You could hear the birds chirping and see trees lining the horizon.

Because I was considered an “experienced” canvasser, I went by myself. I walked around the neighborhood, knocking on doors, not getting any answers. I was partly disappointed, but also relieved because I hated the idea of actually having to talk to someone. When knocking on strangers’ doors, it’s impossible to know what to expect, and there’s a large chance the encounter could take a turn for the worse.

About half way through my list, my phone shut off. The panic began to set in. I had no idea where I was. I found myself standing on the curb in the middle of New Hampshire alone, watching a Trump flag blow in the wind directly in front of me.

I turned my phone back on and saw that it still had some life left. I quickly texted in the group chat about my situation and got a response of where they were. I started walking, practically running, thinking of all the ways something could go wrong. What if I couldn’t find them? What if I got kidnapped?

After about 15 minutes of walking, I found them. All was right with the world.

We continued our list with very few people answering their doors. Where could they all have been? What is there to do on a Saturday afternoon in New Hampshire?

As we walked around with little success, Katelin and Sam told me about their experience. There was something about a kid throwing up in a shower and a dog named Bagel because its butt looked like a bagel. They seemed to have a more interesting experience than I did.

After we all finished our lists, we went back to the campaign office to get more sheets. After a quick break of eating snacks and filming ourselves talking about why we support Bernie Sanders (as requested by Bryan Chong ’21), we went back out to knock on doors yet again.

I’m not a real estate expert on New Hampshire prices, but this location seemed to be a more affluent part of Manchester. The houses were bigger, and trees lined the streets. There were kids playing in their yards, whereas the previous canvassing site was practically deserted.

We split up yet again, this time with my phone fully charged. We managed to have better luck this time around, getting more people to answer their doors.

At a few of the houses I canvassed, children answered the door, and when I asked them if their parents were home, they refused to respond. I gave them the Bernie literature anyway. It struck me that they must not be afraid of crime in this neighborhood because I’m an adult and I still hate opening the door for strangers.

At another house, I finally had the interaction I had been waiting for all day. A young woman opened the door. I got to read off the script for the first time the entire day, explaining that I was volunteering for the Bernie campaign. She said she was leaning more towards Elizabeth Warren but that her husband was a strong Bernie supporter. We talked for a while, and I told her that I had come all the way from Connecticut to canvass. She said that it must have been a really long day and offered me some water or food if I needed it.

After what felt like an eternity of unanswered doors and verbal assaults from Trump supporters driving by, my interaction with this woman made all of that seem trivial. She may not be a Bernie supporter—although she said she might change her mind after she sees The Strokes perform at his rally next week—but she was kind and receptive.

Elections can be polarizing, especially this one, and it is so easy to become disillusioned with our election process and government systems, but sometimes you have one small moment that gives you some hope.

We all walked back to the car, ready to come home after such a long day. We were partly disappointed that we couldn’t reach more people, but we were also hopeful.

Regardless of who you support, canvassing gives you a very different window into the political landscape of the American electorate. If you even have one constructive conversation, it makes the entire trip worth it. It’s easy to feel disconnected from national politics, but there are so many ways you can contribute and feel like you’re making a difference.

New Hampshire, I’m not sure you’re my favorite state, but you are surely a very fascinating one.