Nostalgia with Intention: The Best Broadway Revivals Are More Than Just Remakes 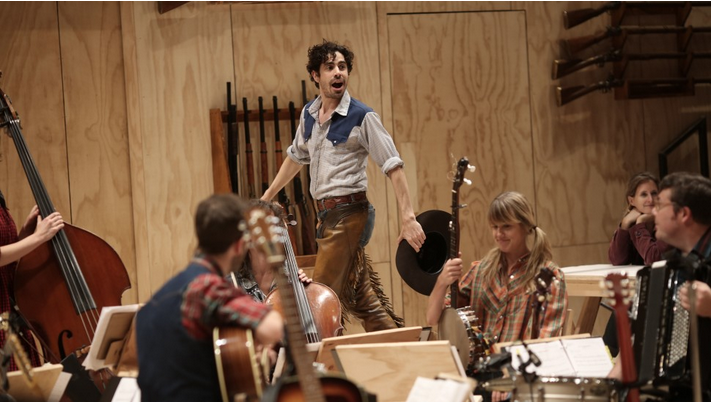 As the 2019 revival of “Oklahoma!” closes on Broadway, the star-studded “The Music Man” returns to a big New York stage. The musical has (literal) company in this season’s revivals of “West Side Story” and “Company.”

These are stories we’ve seen before; more importantly, they’re stories that Broadway audiences—who are overwhelmingly older—have seen before. When my grandma bought tickets to see “Oklahoma!” with me, she recalled seeing it on Broadway not just in 2002, but also almost 40 years before, during the 1979 revival. While I waited on the world’s longest ladies’ room line at intermission, numerous older audience members around me compared the production to the Broadway revivals they’d seen before. Some of them loved how the music had been updated, while others commented on the bright, open set and laughed at the moments of awkward audience interaction. Like my grandma, they had grown up with this story. While they might not have been pleased with every choice, they were excited to engage with “Oklahoma!” in a new way.

There’s something special about revivals. You can take a story you’ve known for decades and put it in a new light. You can take an old situation and contextualize it in modern issues; you can recast roles in different genders, races, sexualities, and ages. You can read lines differently, or change up the music’s pacing and orchestrations. You can alter the setting’s time and place.

With each of these changes, you can bring new meaning to an old piece.

While revivals should allow us to access works in different ways, not all revivals do something as groundbreaking and ambitious as the 2019 “Oklahoma!” Some revivals stick to the script and tell the story again without much change at all—with the improved production value as seemingly the only update.

Revivals also run the risk of being stuck in the past. Some of the more popular revivals were written over half a century ago; there are offensive lines, characters, and plot points. While a conscious and tactful revival may be able to subvert this content, repeating and reshowing it can be harmful.

Why, then, do we feel the need to have revivals at all?

Revivals point to a larger issue on Broadway stages: the repetition of stories we’ve already seen and heard. Specifically in the case of Broadway musicals, if we’re not seeing a show that’s been revived, we’re most likely seeing a show where we already know the story. In the 2018-19 Broadway season, there were two musical revivals and 11 original musicals, and of those 11, four of them were based on films. The season before, all four shows nominated for the Best Musical Tony Award were based on films or a television series.

There’s comfort in watching things we’ve watched before. We like being familiar, recognizing characters and plot points, and tapping our feet to the beat we already know.

And for those on the money side of Broadway, producing shows with well-known stories makes it easier to attract audiences. The “Mean Girls” musical already had a huge fan base from the 2004 hit movie. I bought my sister tickets to see it because I knew she loved the story, and it was easier than convincing her to go see a new play we knew nothing about. This season’s “Mrs. Doubtfire” will no doubt attract fans of the Robin Williams movie, just as those nostalgic for “Tootsie” ran to see Santino Fontana sing as a woman live on stage.

Perhaps “Hadestown,” last year’s Tony winner for Best Musical, explains the phenomenon best. “Hadestown” tells the ancient Greek myth of Orpheus and Eurydice. While it’s not a story from a feature film, it’s a common tale that’s inspired numerous adaptations. Audiences may know the sad ending of the story, but at the end of the show, the company sings that there’s merit in telling it again.

“It’s a sad song,” they sing in the final number. “But we keep singing even so. It’s an old song. It’s an old tale from way back when. And we’re going to sing it again and again.”

Though the original story of “Oklahoma!” may not be as timeless a narrative as that of Orpheus and Eurydice, the classic American tale has also been sung again and again. Watching the modern, exciting revival was just as engaging. It challenged the foundations of the story while still clinging to the original script, pushing audience members to consider the old tale in a new light.

When I returned to my seat during intermission, my grandma and I talked about the show’s changes. She described what she loved about the older versions, and what she was struck by now. Once the show was nearly over and the company was singing in unison, she started singing along under her breath.

“I remember singing this as a little girl,” she leaned over and whispered to me with a smile.

We left the theater with differing opinions, surrounded by an audience shocked and engaged with the show’s dark, altered ending. Some were humming the show’s finale, “Oklahoma,” as they exited their rows.

Just because we know the story doesn’t mean it’s not worth telling again. Yet if we do tell it again, it must be with meaning, intention, and purpose.