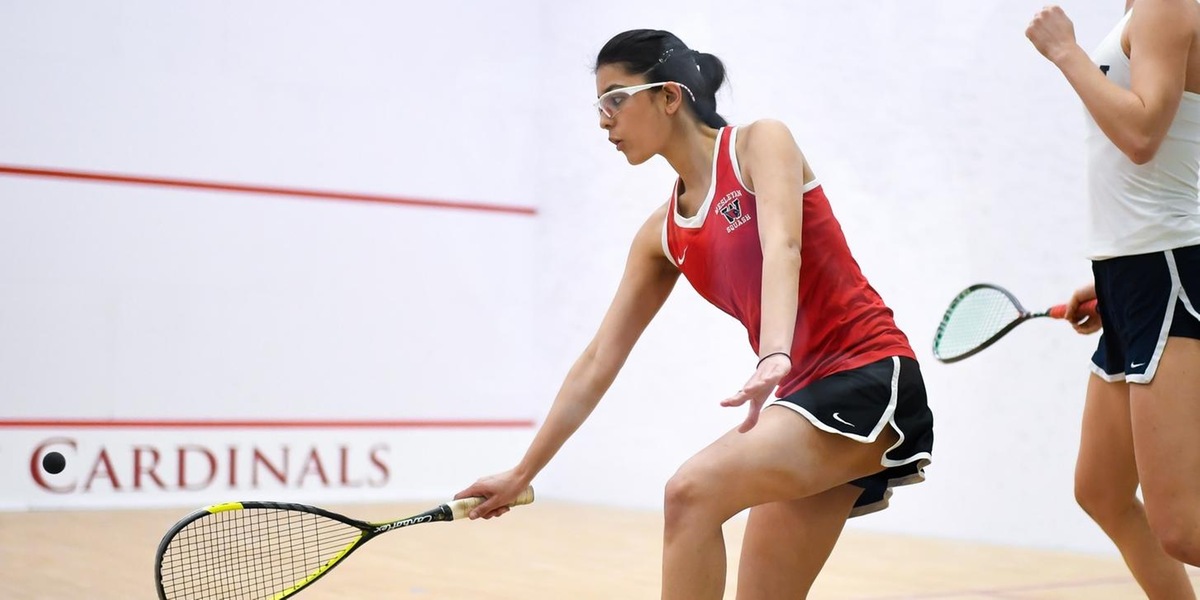 The Wesleyan squash team has been tearing it up as of late, but faced its toughest test of the year this past weekend at the Little Three Championship. The No. 21 women had to face off against No. 16 Amherst, and then No. 13 Williams. In addition to the pressure from two matches against some of the top squash teams in the nation, there was the added intensity of rivalry games.

“The atmosphere at the Little Three is always lively and competitive,” Annie Roach ’22 said. “Although Williams and Amherst have historically stronger and more experienced players than us, that didn’t stop our team from going out and competing earnestly.”

In the first game against Amherst, the Mammoths bested the Cards in a decisive 8–1 affair. However, the lopsided score does not tell the full tale of the match. A huge positive for Wes came with the victory at the top of the ladder for Aditi Prasad ’21. Prasad torched her opponent 3–0, instilling confidence that Wes can compete with anyone.

First-year Vale Osorio also had a noteworthy match, taking her opponent to five games while playing in the fourth spot on the ladder.

“Vale’s match was exciting,” Carly Blue ’22 said. “She really fought for every point.”

Another bright spot for the Cardinals was Blue’s comeback victory in the 11th spot on the ladder, as she secured victory.

“It felt great to beat Amherst,” said Blue. “I felt like I was playing some of my best squash, and I loved to be able to go out and represent Wes like that. I lost the first game, so it was a good mental challenge to stick with it and win the next three.”

Although Blue’s match did not change the outcome of the match, Wesleyan’s strength was evident in her triumph.

After an exhausting match against Amherst, the Cardinals had to get back on the court against league powerhouse Williams. Once again, it was a one-sided result, with the Ephs winning 9–0. One of the highlights discussed by many members of the team was Nina Premutico’s ’20 tightly contested four-game match. Although she fell short, the senior’s effort was certainly appreciated by her teammates.

“It was electrifying to watch Nina Premutico play the best squash of her season,” Osorio said. “Her game was solid and she was perseverant, lifting Wesleyan’s name to a high level of competition.”

“My favorite match I watched last weekend was Nina’s four-game match against Williams,” Roach said. “Her shots were clean, she was moving beautifully, and she played with so much determination, even with a challenging opponent.”

Despite the defeat, according to the team, the Cards are walking away with their heads held high, knowing they competed hard and respected the game.

“Playing Little Three for the first time was an exciting experience,” Osorio said. “Williams and Amherst are very strong teams, but each one of us competed with grit and grace until the last second.”

“On the morale, sportsmanship, and effort levels, we definitely outmatched them (particularly Williams),” Roach added with a smile.

The women’s team were not the only ones who traveled north to battle in the Little Three this weekend. The men’s team also had to face off against Amherst and Williams, ranked No. 22 and No. 20 in the men’s bracket, respectively.

The Mammoths dealt the Cardinals another defeat, shutting out the Red and Black 9–0. Despite the loss, Sean Choi ’21 played the top of Amherst’s ladder tight, falling in a close 11–9 final game. However, the most notable story was first year John Sutherby facing his brother on the Amherst team. Although Wesleyan’s Sutherby fell at the hands of his brother, the match was exciting for the entire team.

“Watching John Sutherby play his older brother Charlie Sutherby from Amherst was the best match I watched this weekend,” Choi said. “Both seemed very excited to play against each other and was just happy to see that the game was played in such great spirit. While his brother did get the edge over him I don’t expect it to be like that next year! Hopefully they’ll meet again.”

“Sutherby played his brother which was fun to watch because that’s funny and also they both played really good squash,” Blue said.

In the second match of the day, Wes faced off against Williams. The Ephs delivered our men’s team their second defeat of the day, winning 8–1. Wesleyan’s lone victory came from Choi who delivered a masterclass performance.

“Winning both little three matches is always one of the biggest goals for me personally so I had been working extra hard for the past week,” Choi said. “Losing out to Amherst the way I did gave me extra incentive to not repeat the mistakes during my Williams match. I thought I made the correct adjustments and played my brand of squash. I knew I just needed to make it as physical as possible so I lengthened the rallies more than I usually do. All in all, I am happy with the way I played for my team and hope to continue playing this way for the final stretch of the season.”

Wesleyan hopes to get back to their winning ways with NESCACs coming up. While the women’s team plays next weekend, the men have a full two weeks to prepare.

“While we didn’t come out on top for the little three’s I think it did give us a big confidence boost for the close matches that we’re going to have throughout the NESCAC tournament,” Choi said.  “We have a good two weeks to prepare and make sure we brush up on our shots and fitness. I’m happy with the team’s motivation as we’re going to have tough matches coming up.”

With both teams charged up and ready to face the competition, it is safe to say that any team that is unfortunate enough to face off against Wes in the NESCACs will have a challenge ahead of them.

“We look forward to playing NESCACs this weekend and wearing the Wesleyan Uniform with pride,” Osorio said.

Annie Roach is an Assistant Sports Editor for the Argus.