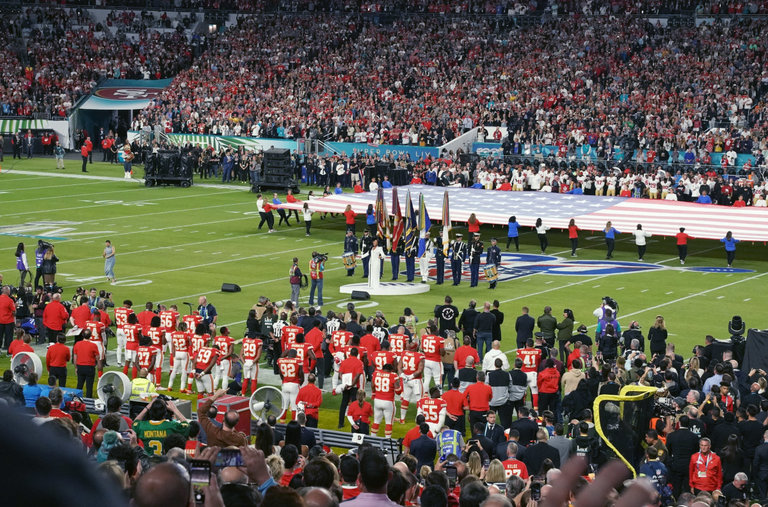 Football is a team game, where the actions of every single player have a dramatic impact on the outcome of each play. However, at risk of sounding cliche, the most notable thing to me about Super Bowl LIV was the play of the two quarterbacks. The game was a virtual deadlock going into the second half, with neither quarterback looking comfortable out there on the field. The 49ers defense harassed Kansas City quarterback Patrick Mahomes throughout most of the first three quarters, with the Chiefs only averaging 5.1 yards per pass during that span. San Francisco, as they did throughout the playoffs, heavily relied on running back Raheem Mostert and rarely allowed quarterback Jimmy Garoppolo to air the ball out. The result was pedestrian overall numbers for both passers: Mahomes completed 26/42 passes for 286 yards, two touchdowns, and two interceptions, while Garoppolo finished 20/31 for 219 yards, one touchdown, and three interceptions.

The difference, then, came down to the fourth quarter. As we’ve seen with another Kyle Shanahan-coached team in the Super Bowl, San Francisco’s defense tired out down the stretch just as Mahomes finally started to get a feel for the game. The result was a stellar fourth quarter performance by the third-year quarterback out of Texas Tech. Down 20-10, the Chiefs scored 21 unanswered points, highlighted by a seven play, 65-yard touchdown drive that put Kansas City on top with just 2:44 left to play. Garoppolo, on the other hand, just looked incapable of responding. He threw two picks, took bad sacks, and badly missed open receivers, including a potential touchdown pass to wide receiver Emmanuel Sanders that he overthrew by at least 15 yards. This 49ers team was built to get ahead early, then stifle the game until they emerged victorious. Once Kansas City found its footing, San Francisco simply didn’t have enough horsepower on offense to catch up.

The turning point of the game was Mahomes’ 44-yard bomb to receiver Tyreek Hill with about seven minutes remaining in the game. Down 20-10 and facing 3rd and 15, ESPN gave the Chiefs just under a 4% chance of taking home the Lombardi Trophy. If the Chiefs couldn’t convert, they’d be giving the 49ers a prime opportunity to kill off the clock and force Kansas City into desperation mode. Instead, Mahomes found a wide-open Hill at the 21 yard-line, setting up a short touchdown pass to tight end Travis Kelce just four plays later. When NFL Films produces their dramatized version of the game, this will be the play they lead off on.

Kansas City coach Andy Reid has been known for his love of cheeseburgers, his affinity for Hawaiian shirts and khaki shorts (see: center, red shirt), and his legacy as a brilliant offensive mind for the last two decades. In 14 years with the Philadelphia Eagles, Reid had won 130 games (a .583 win percentage) and reached a Super Bowl, falling short to the New England Patriots in 2004. Consequently, he entered Sunday’s game as the winningest coach to have never won a Super Bowl. On the other hand, Reid’s teams were a mediocre 14–14 in the playoffs, and the veteran coach routinely struggled with time management and situational strategy late in games throughout his career. The contest in Miami’s Hard Rock Stadium was likely a referendum on the legacy the widely-respected coach would leave behind.

Reid answered the questions with a strong coaching performance, combining adroit play-calling with an unflinching belief in his young quarterback. Now that he’s finally gotten his ring, the discussion can be opened about whether we’ll be seeing his bust in the Pro Football Hall of Fame someday.

Questions for the 49ers

San Francisco reached the Super Bowl behind a dominant defense, led by veterans such as cornerback Richard Sherman as well as young stars like rookie defensive end Nick Bosa. Unfortunately, the history of the NFL tells us that championship-caliber defenses are rarely sustainable on a year-to-year basis. Injuries, free agency, and retirements take their toll on defensive-minded teams; just look at the Denver Broncos, who won a Super Bowl in 2015 behind a dominant pass rush, then fell into football purgatory, where they remain to this day.

The 49ers enter the offseason with only $21 million in cap space, and that’s before factoring in tight end George Kittle’s expected extension. That leaves the team likely unable to retain or extend key cogs on the defense, like defensive linemen Arik Armstead and DeForest Buckner or safety Jimmie Ward. San Francisco has some talent on offense, but barring a significant leap by Garoppolo it’s tough to imagine the 49ers easily finding their way back on top of the NFC.

Tom Brady trolled us all with this Hulu ad (please, someone tell me what it means! Is he not leaving New England? Is he just not retiring?). The Hyundai Smaht Pahk ad, featuring solid Boston accents from Massachusetts natives Chris Evans, Rachel Dratch, and John Krasinski (and a cameo from Red Sox legend David Ortiz), was wicked funny. Apparently, Planters thought it was worth spending the money to turn their recently-deceased anthropomorphic peanut mascot into a messianic CGI figure in order to compete with Baby Yoda (I’m sorry, “Baby Nut” doesn’t work). Also, the all-too-hip ad execs at Doritos thought us kids would dig an Old Town Road spot several months past the song’s expiration date (no hate to Lil Nas X though, he’s an icon). Finally, because I’m an intellectual, I really appreciated the Pringles/Rick and Morty combination, though I’d much rather have the rest of season 4 instead.

Coming from Boston, there is a confidence to being a lifelong Patriots fan, as you just believe that your team cannot lose. This is what I felt last night watching the Chiefs play the 49ers; there was just no way Pat Mahomes would not win. From the moment he stepped into the league, to his record setting second season, this was inevitable. However, last night he was not his best game. In fact, by Mahomes’ standards, his performance was borderline poor. His stat line includes two interceptions, including one that was unforgivable on a pass to Hill. He also almost lost a crucial fumble, and ended the game with a 62% completion percentage. This has to be the storyline coming out of the Super Bowl. Mahomes only showed some of what he could be and STILL won. As long as Andy Reid can maintain his offensive core, this team should be good for a long long time.

On the other side of the field, the 49ers will have some soul searching to do after that loss. Kyle Shanahan will be scrutinized for not being more aggressive before half, and for blowing another big lead—the 49ers were outscored 21-0 in the fourth quarter. Despite the mismanagement, San Francisco still had two opportunities to drive the field and win the game late. Both times their offense looked impotent, they had run out of trick plays, reverses, and with the money on the line young quarterback Jimmy Garoppolo could not get the job done.

Stories That Should Go to Bed

At the end of the first half, the 49ers received the ball deep in their own territory with less than two minutes left in the half. Coach Kyle Shanahan, content with going into the half with a tied game, chose to let the clock run out on the quarter. In a game where the 49ers were desperate for points in the second half, this seems like a disastrous decision. However, let’s remember that the 49ers took the lead after the half 20-10. They got just what they wanted after the break.

Shortly after the game, my friend, a big 49ers fan, texted me “another game decided by pass interference.” While it is natural to blame the refs when your team loses, pass interference frankly did not factor into this one. The calls were close in both directions and the refs eventually chose to officiate it like a regular season contest, which in my mind is what should be done.

I still can’t really believe it. I mean, I can; I predicted it last year. But it’s difficult to fully comprehend.

The Kansas City Chiefs are Super Bowl champions. A second Lombardi trophy will now reside at One Arrowhead Drive in Kansas City, Missouri. The storied, yet troubled franchise once again holds the title of World Champions.

The last time the Chiefs won the Super Bowl was fifty years ago, in 1969. After they won it in ’69, the city organized a celebratory parade through the streets of downtown Kansas City, similar to championship parades nowadays. During the parade, one commentator said it was the best day in the history of the city.

I was not alive then, nor am I an expert on the city’s history, so I can neither confirm nor deny whether the 1969 Super Bowl parade was the best day in the history of the city. I can, however, confirm that winning this Super Bowl means a whole lot to Kansas City.

Patrick Mahomes is a phenom. Andy Reid is a legend. Brett Veach is a genius. The Chiefs are World Champions.

There isn’t much else to say beyond this: the Chiefs were the best team in the NFL this season. Their offense was spectacular; their defense improved incredibly; their special teams avoided mistakes.

Many people deserve credit for the Chiefs’ success this year. But before credit is dished out, one narrative must be crushed: the Chiefs beat San Francisco 49ers, who, coming into the game, were labeled the best all-around team in the NFL. Despite a few mistakes, overall, the Chiefs played better than the 49ers both offensively and defensively, especially when it counted. The Chiefs scored more points than the 49ers. The Chiefs won the game.

Drew Kushnir can be reached at dkushnir@wesleyan.edu or on Twitter at @dkush99.

Ben Owen can be reached at bowen@wesleyan.edu or on Twitter at @benjaminowen28.