“The Middletown Way”: State Rep. Q Phipps on His Bid for Re-Election 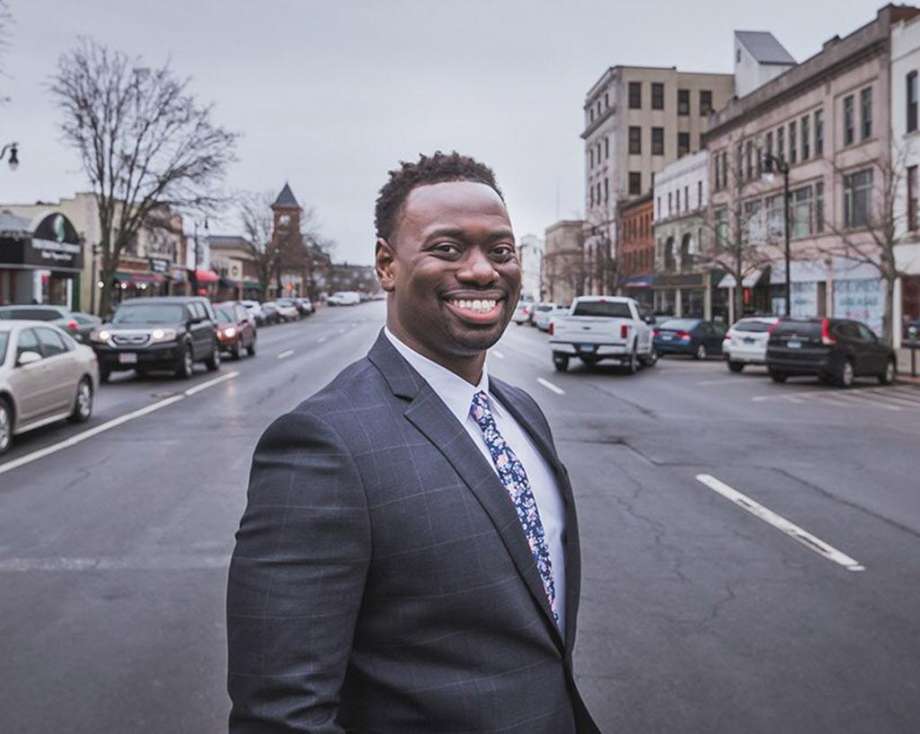 It had been five minutes since I met Quentin “Q” Phipps, the state representative for Middletown, outside of a Denny’s on South Main Street early on a Friday morning. We had exchanged no more than four words, when I found myself at a booth watching the 36-year-old Phipps chat and laugh with a table of three elderly women whom he immediately recognized as soon as we walked in and bounded over to. As he would explain to me later, he’s known them since childhood from AME (African Methodist Episcopal) Zion church that he and his mother have attended for many years. I turned my eyes away for no more than a moment to look down at my interview questions, and by the time I brought my eyes back up to scan the room for Phipps, he had already shifted over to another booth to say hello to his neighbor, who was eating alone. Phipps then intercepted a waitress as she moved over to our table. It turned out she’s his cousin.

The scene unfurling in front of my eyes was a testament to the small world of Middletown politics as much as it was to Phipps’ gregariousness.

“When you’ve grown up here your whole life, Middletown ends up becoming a real close-knit community,” Phipps, who’s wearing sweatpants, sneakers, and a Wesleyan hoodie, says to me apologetically as he slides into our booth. “I know what this must look like but this isn’t me being a politician, it’s just the way I am.” He gestures towards the room. “This is family.”

Phipps had suggested we meet at his local breakfast joint, just across from the Club 24 gym he was going to lift at after (“My workouts are LOUD, trust me”). Initially, we planned to discuss his re-election to the Connecticut House of Representatives for 100th district, which he officially announced the day after (this past Saturday) in a Facebook live video. But our interview ultimately turned into a long-ranging conversation about his upbringing, time in the Connecticut state house, and governing philosophy.

On first impression, Phipps doesn’t present himself with the carefully curated, cagey demeanor typically associated with cliched politicians, ruthlessly striving for higher office. He’s unabashedly open and unfiltered about aspects of his personal life that others might shy away from or feel uncomfortable sharing.

Maybe it’s a product of talking to someone on their home turf, but within the first minute of our interview, he tells the somewhat zany yet endearing story of how he matched with his now-wife on Tinder during a layover at the airport in Kansas City, his wife’s hometown. He self-mockingly mentions his love for video games, and his Facebook page bio reads “fan of all Geek Culture.” While more cynical politikos might call this public face a “choir boy act,” Phipps’ moral impulse to politics and earnestness stem from an upbringing in the church. In the cadence of his voice, you can almost hear a pastor offering solace to a congregant after a confession or echoes of the religious hymns that reverberate throughout the rafters of Zion during a Sunday service. Whatever that nebulous x-factor of authenticity is in politics that everyone seems to crave from their elected leaders these days, Phipps has it.

To be fair, it’s clear that Phipps has already picked up enough political savvy from his limited time in state office to steer a conversation in the direction he wants or more importantly, away from where he doesn’t want it to go. If a sensitive topic came up, he would be careful to go off the record, and whenever I asked him about his political opponents, he would shake his head:

“This is a campaign about our neighbors, and our people,” he said. “This is about the workers at Stop and Shop who were striking because there were unfair practices that were being put against them, it’s about our students all having a great education, a public education, and this is about seniors being able to stay in their homes, young people being able to find the right housing choice for them and being able to get transportation to their job or to a medical appointment. That’s what it’s about. It’s about us, it’s not about who I’m running against.”

Before running for public office, Phipps worked after college on a number of community-building projects for non-profit organizations, an area that Phipps firmly believes can be an active force for progressive change. Phipps was a community banker, helping primarily low-income families with financial literacy, such as understanding loans, credit scores, and balancing checkbooks. On the side, Phipps became involved with local city politics working on the board of planning and zoning, later becoming the director of the downtown business district.

“I knew I always wanted to go into government eventually but the mindset and types of questions you have to ask in nonprofit work have been very influential for the role that I see set out for myself as an elected official,” Phipps said in between bites of pancakes and bacon. “Talking things out with community members, asking them about who they are, how I can help them, those are the things I really care about. Folks that are closest to the issue are the ones that have the best solutions. We need to democratize power, so that those who experience the issues at hand can more easily fix their own problems.”

Phipps’ work for non-profits and exposure to the ways non-governmental actors find solutions to community problems has deeply informed his style of governance. Since taking over office in 2019 for his good friend and now-state senator Matt Lesser as the Representative for Connecticut’s 100th District, Phipps has guided his approach to governing by what he calls “The Middletown Way.” For Phipps, the Middletown way denotes a hyper-localized brand of pragmatic progressivism that brings together many different stakeholders, with potentially divergent perspectives, to work out solutions to community problems.

“We may not agree on everything, but that collaboration in the process of working together is what makes our project significantly stronger,” Phipps said. “I think a good example is the Middletown pride event over the summer where Wesleyan, the chamber of commerce, numerous nonprofits, and the community came together and built it together and then we all celebrated and It was a huge event. Thousands of people and businesses were happy. That’s the ‘Middletown Way.’”

As part of the “aggressive” policy-oriented platform that he ran on in 2018, Phipps, who sits on both the finance and elections committee, has brought the “Middletown Way” approach to Hartford. In office, Phipps pushed for expanding the minimum wage, paid family leave, and extending access to early voting. On those three campaign promises, Phipps and his fellow Connecticut Democrats have delivered, successfully passing legislation containing these reforms.

“I’m really proud of the macro statewide issues that we were able to work on, but we were also able to bring back gains on a lot of the local Middletown specific issues I wanted to fight for,” Phipps said. “So in my first year we were able to get 3 million additional dollars in municipal aid that will mostly go to public education, $100,000 for nonviolence prevention monies to Middletown organizations, and another close to $2,000 in scholarship money.”

The balance of local bread-and-butter issues as well as more sweeping expansions in social programs has defined Phipps’ focus in office. As the vice chair of the progressive caucus, there’s no doubt that during his time in office, Phipps has fought for progressive initiatives that put working class families, like the one he came from, front and center.

Yet, as a business school graduate of Bryant University, Phipps describes the balancing act that sits at the heart of his politics between his college education in “conservative economics” and his left-leaning political convictions. Without denouncing the fundamental principles of market-oriented capitalism, Phipps rejects the logic of unfettered trickle-down economics that has dominated the country’s political consensus for the past forty years as unsustainable—and impractical.

“I look at progressivism as a framework, more so than a checklist,” Phipps said. “I look at progressivism as pragmatism. If we’re trying to infuse cash into our economic system, to just give it to our top earners as our government has been doing is not realistic. They’re going to save their money. They don’t really have anything else to spend it on. If you give it to a single mom or a working family, that money’s going to go right to something like repairing their car for example, it’s going to go to the groceries that they may not have been able to afford, or that one vacation that they might finally be able to get in three years, that money is going to be spent on immediately and you have huge economic stimulus right into our economy. That’s the sort of pragmatic and progressive policy work that I’m trying to work on and look at things through.”

Phipps applies this framework when addressing some of the central issues that the state of Connecticut faces, such as disappearing jobs and income inequality. For example, whereas numerous states around the county have tried to woo big corporations like Amazon to open up shop in their state through tax breaks and subsidies, Phipps sees this method of job creation as a race to bottom.

“I want state dollars to go to those who need the most amount of help,” Phipps said. “The way we invigorate our economy is through investment in public education so that families want to stay in state and build families as well as building up our higher education hubs, which open up new workforces. We also need to revamp our state transportation to foster more efficient inter-connected commerce across the state.”

As a model for the kind of government spending and infrastructure programs that he would like to see in Connecticut, Phipps brings up the state of Massachusetts as a case study that he clearly knows like the back of his hand.

“Taxachussetts is a great example of this, you don’t move to Boston for lower taxes, you move there to have their phenomenal public transportation and be near economic hubs around MIT and Harvard,” Phipps said.

However, Phipps admits that one of the biggest structural impediments to these reforms passing the Connecticut state house, despite a strong democratic majority, comes back to the state’s unofficial motto. As Phipps explains, the state is known as the land of steady habits due to its historic cautiousness to take chances on idealistic government initiatives. When pushed to address this dynamic, Phipps brings the question back to his upbringing and moral principles.

“I tell folks all the time, who are skeptical about my ideas, that I’m a progressive because of very conservative principles,” Phipps explained. “I grew up in the church. I went to a conservative business school. But that in fact is what makes me a progressive, because I feel that it’s both practical and I feel like it’s also moral which is what leads me to progressivism. Let’s forget the labels. I believe that people should be able to get to and from where they want to go in an efficient way and have a lower impact on the environment, while also having a consistent commute.If that makes me progressive, so be it. If that makes me conservative, so be it too.”

Kaye Dyja contributed to this reporting.